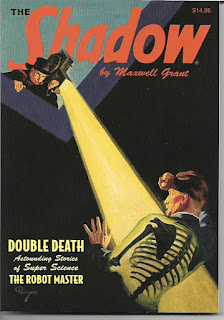 The Shadow #104: Double Death and the Robot Master [February 2016; $14.95] involves the Dark Avenger in cases with a science-fictional vibe. The first of these two novels is by Theodore Tinsley and the second is by Walter B. Gibson, both writing as Maxwell Grant.

Double Death was originally published in The Shadow Magazine dated December 15, 1938. From the title page of that magazine:

They each died twice - and now it was The Shadow’s turn to face Double Death!

Remarkably, the novel was adapted for Whitman’s Big Little Books. Titled The Shadow and the Living Death, it was published in 1940.

The Robot Master was first published in the May 1943 issue of The Shadow Magazine. From the back cover:

The Shadow battles an eight-foot man of steel controlled by The Robot Master.
In his informative “Interlude” essay, writer Will Murray describes this adventure as “a revisitation of a story that was rare in The Shadow Magazine. That earlier story was titled Charg, Monster and  appeared in the July 1, 1934 issue.

Sanctum Books always delivers terrific bang for your bucks. Besides these two novels, this volume also has “The Case of the Mechanical Monster,” a radio script by science-fiction writer Max Ehrlich that was broadcast on January 17, 1943.

Rounding out the issue is “Iron Munro the Astounding Man,” a six-page comics story adapted by Theodore Sturgeon from a prose story by the legendary John W. Campbell. The story is drawn by Jack Farr and comes from Shadow Comics #6 [August, 1940]

The front cover painting for this volume is by George Rozen. The back cover art is by Rozen, Modest Stein and Jack Farr. Interior illustrations are by Edd Cartier and Paul Orban. It’s another fine offering from Sanctum Books.

Posted by Tony Isabella at 7:01 PM