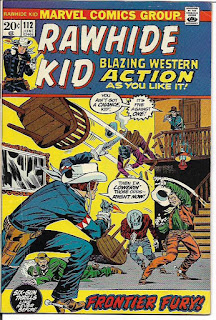 The Rawhide Kid is my favorite western comics character and one of my favorite comics characters period.  Something about the short of stature (but big on courage and fighting skills) Johnny Clay spoke to the short of stature (but big on comics-reading skills) teenage Tony Isabella.  After rereading the Kid’s earliest adventures when Marvel Comics reprinted them in a pair of Marvel Masterworks and an Essential Rawhide Kid volume, I wanted to reacquire every Rawhide Kid comic, reread them and write about them in this bloggy thing of mine. This is the 98th installment in that series.

The Rawhide Kid #112 [June 1973] has a cover by Larry Lieber with inks by Herb Trimpe. Inside, the all-new “Frontier Fury” (14 pages) is written and penciled by Lieber with George Roussos inking, June Braverman lettering and Corey Adams coloring. The editor of record is Roy Thomas.

Before we get to the nuts and bolts of the story, let me answer a question from a regular reader of this blog. She asked if I’ve read these Rawhide Kid stories since their original publications. Nope. When I reread a tale like this one. I’m doing so for the first time in 44 years. Now, as I reread them, I may recall things I liked or didn’t like about them. However, for the most part, I’m rereading and rediscovering them anew.

The story opens Cole Jessup, “a gunhawk on the run,” ducking into a saloon to avoid the Fargo Boys. He killed one of their own when the man called him out, but he’s not fast enough to outshoot four gunslicks. But, once in the saloon, he recognizes the Rawhide Kid enjoying a bowl of stew.

Jessup joins the Rawhide at his table. The two hit it off. Which is when the Fargo Boys show up.

Cole points out he’s with the Rawhide Kid, making the Fargos think the two men are partners. The Kid has no choice but to back Jessup when the shooting starts. This does not go well for the Fargo Boys. The wounded owlhoots limp away from the saloon.

Fiery rancher Nora Evans storms into the saloon and slaps the face of Cragstone, another rancher. The man wants her land. She accuses him rustling her cattle and killing off her ranch-hands. He laughs and tells her to prove it.

Getting to slap Cragstone was a bonus. Nora came to the saloon to hire men who aren’t afraid of Cragstone or his guns. Only two men sign on: Cole Jessup and the Rawhide Kid. Both are smitten with the pretty young rancher.

Two young firebrands and a shapely wench are a mighty interestin’ combination! Could be we won’t have to do anything but wait until the fur flies!

Back at the ranch, the Kid and Cole are enjoying their new jobs and “havin’ a boss lady whose easy on the eyes.” Their romantic rivalry is friendly enough, but Cragstone still thinks they will fall out, leaving the ranch to be easy pickings for him and his goons.

Sure enough, when Cole gets too fresh with Nora, Rawhide steps in and a fistfight ensues. The Kid wins that, but then Cole challenges him to a gunfight. The Kid doesn’t have a choice, but, rather than hurt or kill Jessup, he shoots the gun out of the man’s hand. The angry Cole leaves, telling Rawhide that he can fight Cragstone all by himself.

Unfortunately for Jessup, the Fargo Boys spot him and ambush him. Leaving him for dead, they ride off to sign up with Cragstone. The old man is paying plenty for gun hands.

Cragstone is delighted Jessup is out of the picture. He tells the Fargo Boys they can write their own ticket if they can kill Rawhide as well.

Cragstone’s men cut one of Nora’s fences and make off with cattle. The Kid sends Nora back to the ranch and trails the rustlers. Right into an ambush. He’s outnumbered and pinned down behind some rocks.

Returning to her ranch, Nora sees the fallen Cole. He’s not dead. She hugs him. She does care about him.

Cole deduces Rawhide is heading into a trap. He rides to the rescue and arrives in time to take out a killer who was preparing to shoot the Kid in the back. Between the two of them, Cole and the Kid make short work of the bad guys. Cragstone pulls a hidden gun on his foes. It’s the last bad move he’ll ever make.

I love the last two panels of this story. Cole and Nora kiss. The Kid decides to push on.

COLE: Wal, honey...Cragstone and his boys are out of business! Our troubles are over!

RAWHIDE: From here it looks like your troubles are just beginnin’ ma’am! In any case, I wish you two lots of luck! With your tempers, you’ll need it! What you won’t need, is havin’ me around! So I’ll just push on!

Cole and Nora were fun supporting characters and I wish we had seen them again. Alas, there would only be three more new Rawhide Kid stories in the title’s run. 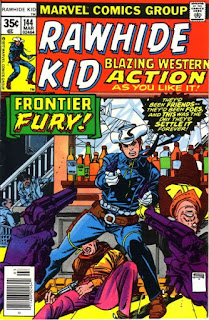 This is one of those stories that deserves to be reprinted...and it was. With a new cover by Gil Kane, it was reprinted in issue #144 [March 1978].

This issue has one of those marketing things that annoyed the heck out of me as a reader and as a Marvel staffer. Across the bottoms of the story pages were these one-line plugs. Like:

Mighty as the Hulk! That’s the macabre Man-Thing...in every fright-filled issue of Fear!

I might have written some of these. I definitely wrote some of the even more absurd topper lines for the British weeklies that Marvel was producing around the same time, the result of our frequently clueless UK partners thinking we should make our weeklies look like every other British weekly. I should write a bloggy thing on this sort of disconnect between the Marvel offices and the folks across the ocean.

There were also lots of non-comics ads. The one that caught my eye this time around was:
Wear the Badge of the Future in Conservation. Get FREE FACTS about exciting outdoor careers. You could send away for a “free conservation career kit”. 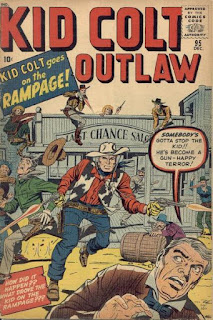 Also in this issue is “ A Man and His Gun!” (5 pages) by Stan Lee, Jack Kirby and Dick Ayers. It’s from Kid Colt Outlaw #95 [December 1960]. It’s one of the best of the non-series stories with amazing Kirby/Ayers art and top-notch writing from Lee.

Three masked riders threaten Ben at gunpoint. They ask “Where are yore irons?”

Ben doesn’t carry guns. The lead rider doesn’t believe him because  “everybody totes a gun in these parts!”

Red, one of the brothers, expresses his belief that Ben is “yella!”

Ben turns his back and goes inside his cabin.

RED: Well I’ll be switched! We sure got ourselves a chicken-livered neighbor, boys! He won’t fight for nothin’ nohow!

Inside, we meet Ben’s father, a man of the cloth. He realizes that the boys have been riding his son. Ben’s father opines “it’s mighty difficult being the son of a minster at times.”

BEN: Don’t say that, Dad! I’m proud to be your son! And some day I aim to be just like you!

The Collins brothers see smoke coming from their ranch and ride to the scene. Ben and his dad also see the smoke and ride after them.

The main barn is burning like tinder. Impulsive Red grabs a bucket of water and rushes into danger, thinking the barn can be saved. A wall crumbles and Red is trapped inside.

While the other Collins watch helplessly, Ben says they can’t just stand and do nothing. He rushes into the burning barn. Ben’s father and the Collins brothers fear the worst...until Ben comes running out of the fire with Red.

In the final panels, the Collins boys apologize to Ben. They know he has more courage than the three of them put together. He thanks them, but says he has to go. Asked where, he responds:

I’m off to Boyneville to study for the ministry...just like my dad! I’m gonna spread the word thruout the West that the day of the gun has ended! At long last the West has come of age

I love Kirby-drawn westerns, especially when they are accompanied by great writing and inking. I’d love to see Marvel collect some of the best of these stories. Combined with historical annotations of the people and events featured in them.

Next up is a full-page house ad for Dracula Lives! It’s “more than a comic book...a giant-size 76-page magazine masterpiece filled with story strips, features and a treasury of photos!”

The “Marvel Bullpen Bulletins” page has no “Stan’s Soapbox” because Marvel has so many “goodies” to be tossed at readers in the coming weeks. There are pitches for Dracula Lives and Monsters Unleashed. There are teasers for Tales of the Zombie and Vampire Tales.

The bulletins page plugs the current issue of Spider-Man, “one of the greatest, most important issues ever...spotlighting perhaps the most momentous turning point yet in the career of our wondrous wall-crawler!” Yeah, it’s the issue when Gwen Stacy was killed by the Green Goblin and a failure of creative imagination.

The half-page bulletins section ends with an item on The Haunt of Horror, the prose-fiction digest edited by Gerry Conway. Even with stories by Fritz Lieber, Harlan Ellison and R.A. Lafferty, HOH will only last two issues.

The rest of the page is an ad for FOOM (Friends of Old Marvel), the new Jim Steranko-produced fan club. For $2.50, a member would get a poster, a membership card, stick-ons, a full year’s subscription to the FOOM magazine and a special surprise envelope. Four issues later, Steranko would leave and I would end up as the next (but far from the last) editor of FOOM Magazine.

The “Riding the Trail with Rawhide” letters column also got cut to half-a-page of really tiny type. Denny Tolmund of Kansas City asks how old the Kid is. He was confused by the difference in how some artists draw him. The answer:

It’s been several years since the fateful gunfight that caused Johnny Clay to be falsely branded an outlaw. At the time of the gunfight, Johnny was approximately nineteen years old. We’d guess his “present” age is about twenty-three.

David Miller of Brooklyn, New York liked that Rawhide Kid #107 had a full-issue adventure, but wasn’t thrilled it was a reprint. He wants all-new, full-length adventures.

The bottom half of the page was an ad for Monsters Unleashed, which instructed readers to...

Be on the look-out for:

*Art and script by the Bullpen’s best!

*Plus: a treasury of terror-laden photos!

It was an exciting time to be a Marvel Comics reader and also to be a fan working in the Marvel Bullpen.

I'm taking a few days off, but I'll be back soon with more stuff!

Posted by Tony Isabella at 1:35 PM