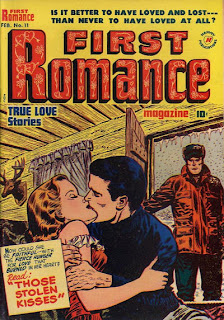 ﻿All I know about First Romance Magazine #11 [February 1952] is that
it was published by Harvey Comics in the month of my birth and that
the cover may have been drawn by Lee Elias.  However, with a cover
tag like “IS IT BETTER TO HAVE LOVED AND LOST...THAN NEVER TO HAVE
LOVED AT ALL?”, I wonder if it might have been the most depressing
romance comic of the 1950s.  I may never know for sure.

I’m bouncing back from my latest go-round with depression.  I can
tell because I found a conversation with a publisher more laughable
than annoying.  It was obvious within minutes that he had no real
ability to hire me or interest in hiring me.  He wanted to pick my
brain for free and, these days, I don’t let anyone pick my boogers
for free.  That sounded much funnier in my head.

I brought some happiness to a small part of the Internet by posting
my first ever Twitter hashtag tweets:

I'm not feeling well. I knew I shouldn't have gone joyriding around
that gamma bomb test. #badcomicbookchoices

Maybe cutting through this alley with my wife and kid wasn't such
a good idea. #badcomicbookchoices

I was pleased and amused by the tweets of the other comics fans and
professionals who posted with that hashtag.

While I’m in good spirits, I figure I’ll tackle some comics-related
subjects I’ve been putting off because I didn’t want to write about
them while I was depressed.  Still staying away from the political
stuff for now, though. #goodmentalhealthchoices

I’m not going to address the merits of my friend Gary’s case or of
Marvel’s countersuit.  I realize Gary’s version of the creation of
Ghost Rider is disputed by others who were working for Marvel when
Johnny Blaze made his debut.  Some of those others are friends of
mine as well.

But...the first appearance of Johnny Blaze carries the credit line
“Conceived and written by Gary Friedrich” and that proclaims that
Marvel recognized his predominant role in the creation of the Ghost
Rider and recognized it in print.  What does that credit represent?
I can’t say for certain.  I had a similar credit line on the first
issues of Black Goliath, Champions, and the Tigra feature that
ran in Marvel Chillers.  To me, it meant that I had taken existing
characters and come up with a new way of presenting them to Marvel
readers.  To Gary, the credit line obviously means much more than
that.  I doubt Marvel would have allowed him a “created by” credit.
What appeared was likely the best Gary could get.

I absolutely believe Gary should benefit from the success of Ghost
Rider.  The character has made millions of dollars for Marvel over
the years: comics, movies, toys, and more.  Even if Marvel has no
legal obligation to give Gary a slice of that pie, it would be good
business for it to do so.  If a comics company lets its writers and
artists know their hard work will be rewarded, then they might well
create new characters from which both the company and they would
benefit.  It’s an incentive.  It’s smart business.

Due to Marvel’s countersuit, Gary was ordered to pay $17,000 to the
company...at a time when he is in poor health and in dire financial
shape.  Perhaps the judgment has merit, perhaps it doesn’t, but it
would be egregious and vindictive for Marvel to do anything other
than forgive that debt.  Especially given how much money Marvel has
made from the Ghost Rider.

Gary Friedrich may never created another character as successful as
the Ghost Rider.  However, Marvel treating him fairly would be the
moral thing for the company to do - and I think if we’re going to
claim corporations are people then we have a reasonable expectation
that they act humanely - and, as noted above, the smart thing for
the company to do.  Because corporations don’t create characters.
That’s the sole providence of actual people.

I have previously discussed my disgust with the “Kirby as auteur”
crowd and their belligerence toward anyone who sees (and remembers)
things differently than they.  They’ve called several professionals
who worked with Jack and/or Stan Lee liars.  They have attempted to
deny fair credit to some of those professionals and, in particular,
demonize Stan.  One of their number has so actively harassed one of
their targets that the miscreant’s Internet service provider took
action against the miscreant.  While I surely don’t claim to have
known Jack and Roz Kirby as well as many, I can’t believe either
would condone such behavior.  It's a disservice to Kirby’s legacy.
I don't see vilifying others as a prerequisite to honoring Kirby.
Never have and never will.

My distaste for the actions of the agenda-driven Kirby zealots has
naught to do with my opinion of the Kirby Estate’s lawsuit against
Marvel.  From the start, I thought the lawsuit was an overreach on
the plaintiffs’ part.  I thought it was a weak case because of that
overreach.  The judge seems to have agreed.

None of the above changes my opinion that Jack Kirby was not fairly
compensated for his pivotal role in the creation of the vast Marvel
Universe.  Stan and Jack, along with Steve Ditko and others, created
a truly amazing reality and all of them should have benefitted from their
acts of creation on behalf of the company...and their heirs should
benefit from it as well.  Beyond Jack’s astonishing creative drive,
he worked because he wanted to provide for his family.  Marvel has
a moral obligation to honor Jack’s wishes in this matter.