A DEVIL AND HER LOVE SONG 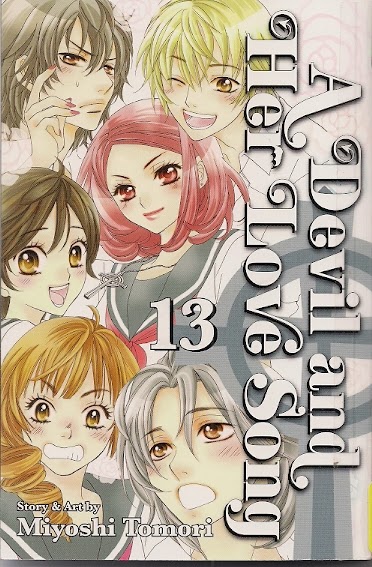 Miyoshi Tomori’s A Devil and Her Love Song [Viz Media; $9.99 each] is a 13-volume shojo manga series about Maria Kawai, a devil with the voice of an angel.  Maria isn’t really a devil, of course, but her blunt honesty and difficulty relating to fellow students stand between her and the happiness she seeks.

Shojo manga center on young female protagonists. These heroines are usually in their teens, youngsters on the verge of becoming adults. Many of these series are like unto soap operas and sometimes they involve steamy situations.  A Devil and Her Love Song is rated “T” for teens and I think that’s the right call.

I think A Devil and Her Love Song is better written and ”performed” than any of the garish teen and 20-something crap we inflict on TV viewers in this country.  While the pretty boys and girls of bilge like Beverly Hills 90210 and Gossip Girl are jumping in and out of beds while dealing with problems of their own arrogant, privileged behavior, Maria and her classmates must contend with real troubles.
Emotional conflicts. Families and, in the case of Maria, incomplete  knowledge/understanding of exactly who her family is and the why of her present circumstances.  Bullying teachers. The confusion that comes with deep friendships and love.  This story of young people in Japan, this comic book series about young people in Japan, seems so much more realistic to me than its counterparts on American TV.

Tomori’s characters are interesting.  Her art, while conforming to shojo sensibilities not always conducive to sure storytelling, is compelling and filled with emotion.  Ultimately, I look back on the 13 volumes of this series and I see a story of growth, redemption, struggle and triumph.  I found myself eagerly awaiting each volume of the series and finally delighting in Tomori’s somewhat open but  satisfying conclusion to her story.

A Devil and Her Love Song is great comics.  I’ll be looking for the next Tomori project.

When someone on the Fans of Syfy Original Movies page recommended The Day the Earth Stopped [The Asylum; 2008], I requested the film  from my library system.  I received the Blu-ray version and watched it a couple nights ago.

This movie is an Asylum mock-buster and does have similarities to the 20th Century Fox remake of The Day the Earth Stood Still that came out the same year.  It also has similarities to various movies and science fiction stories that came out both before and after the first The Day the Earth Stood Still (1951). 20th Century Fox made the usual legal threats, but, near as I can determine, no further actions were taken.

Judging the Asylum knockoff on its own merits, I enjoyed it.  It’s more quiet and thoughtful than I expected with only a few instances of scary destruction.  Indeed, I think some of those scenes might have come from other Asylum movies.

The movie is directed by and stars C. Thomas Howell, a fine actor who always brings a reality to the characters he plays.  I’d much rather watch Howell in a movie than any pretty boy scenery-chewer like Keanu Reeves.  In this movie, Howell plays a soldier who must choose between his orders and saving the world from the judgmental aliens preparing to preemptively strike us into drifting molecules. Most of the other actors are so-so, but I must give kudos to Darren Dalton as Howell’s commanding officer, who must also make a tough decision in the climax of the film, and Judd Nelson in a small but pivotal role.  Though her role as the alien Sky didn’t lend itself to great acting, Sinead McCafferty is so strikingly beautiful that she makes the part work.

The Day the Earth Stopped is well-written and well-directed with a few good performances and some genuine suspense.  It’s definitely worth watching.

Dark Horse Presents [$7.99] has and continues to be a fine comics anthology.  Like most anthologies, there are features and stories I like a lot and some I don’t like a lot.  But 80 pages gives Dark Horse a lot of room to work with and I’m quite satisfied with the bang for buck I get from the title.

Dark Horse Presents #32 is the latest issue I’ve read.  It has the conclusion of a wild Hellboy story by Mike Mignola with art by Mick McMahon.  It has the latest chapter of an action-packed Nexus tale by creators Mike Baron and Steve Rude, a chapter which carries some real emotional punches.  It has the first chapter of new story in the darkly-comedic Many Murders of Miss Cranbourne by Rich Johnston  and Simon Rohrmuller. Also worth noting: Monstrous by Steve Horton and Ryan Cody, Kill Me! by Chad Lambert and Christine Larsen and Saint George: Dragonslayer by Fred Von Lante and Reilly Brown.

I’ve heard Dark Horse Presents will be ending and then relaunching. As someone who enjoys anthologies and who enjoys writing for them, I hope the title will be back.  While we’re waiting, here’s a bit of advice:

Change the design of Dark Horse Presents to give new readers a leg up on understanding stories they may be discovering midway through said stories.  This will also be helpful to returning readers who, like a certain Tipster, read an awful lot of comics.  I’d suggest moving Mike Richardson’s fine editorials to the inside back covers and including brief synopsis for each feature on the inside front cover contents page.  Don’t get artsy-fartsy with the design.  Just put the necessary information there.

Geoff Johns has written one of the best runs on Aquaman ever.  It ranks with the cool Bob Haney/Nick Cardy comics of the go-go 1960s and the Steve Skeates/Jim Aparo adventures that followed that run. Combined with stunning artwork by Paul Pelletier and Sean Parsons, I even like it better than Peter David’s fine work on the Sea King. Overcoming DC’s generally putrid “New 52" devolution, Aquaman has been one of the very few consistently enjoyable comic-book titles from that woefully mismanaged company.

Sadly, not even Aquaman is immune to a marketing stunt I well and truly loathe.  Aquaman #25 is cover-touted as “the epic finale of  Death of a King”...and it ends with a cliff-hanger.  The story ran seven issues. The readers deserved an actual conclusion.

Posted by Tony Isabella at 2:41 AM