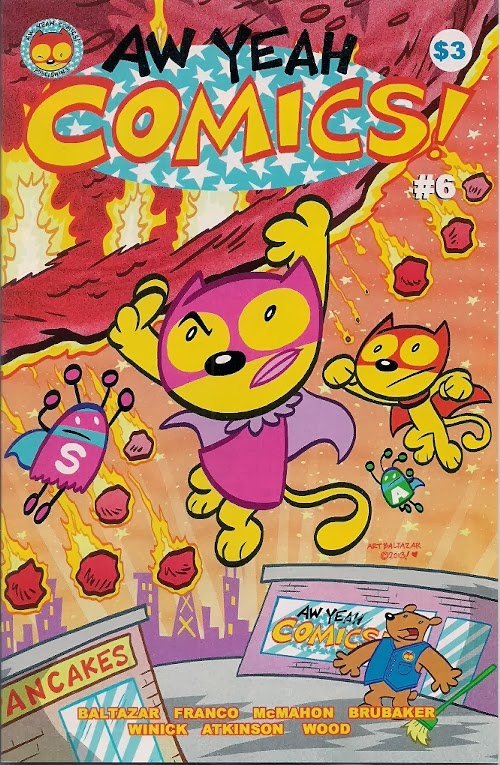 This is amusing and sad.  Apparently, Marvel Comics stopped selling single-issue comic books to newsstands two years ago and no one noticed...and stopped selling comics to bookstores three months ago and no one noticed that either.  When someone finally did notice, there were mournful and not-so-mournful exclamations that this was the beginning of the end of the traditional comic-book format whose extinction some people have been predicting for a decade or more. I wouldn’t count that old soldier out just yet.

In his Comic Book Galaxy blog you should all be reading regularly, my pal Alan David Doane wrote:

If you liked browsing for single-issue Marvel titles at Barnes & Noble or other major book retailers, you appear to be out of luck: Marvel Comics is no longer making single issues available to mainstream booksellers. This will either make Brian Hibbs very happy or cause his head to explode, I am not sure which. But if it makes him happy, I hope he realizes that it means many people will no longer even be aware that Marvel Comics exist in single issue form, and likely hasten the demise of new, single issue funny books as an actual thing that exists in the real world at all. So long, floppies -- it was nice knowin' ya.

Seriously...I would mourn the loss of the single-issue comic books. A lot of great work has been published in that format. Great work is still being published in that format. And there's a sense of community around fans and readers making that weekly trip to the comics shop for the latest single-issue comic books. (Can you tell I dislike the term you use?)

On the other hand, today's writers, editors and publishers aren't making much use of the single-issue format. Stand-alone stories of quality are rare. Padded serials with little or no humanity are the thing, even in Archie Comics.

The loss of the single-issue comic book will sadden me, but it won't change my life much. I don't write for the mainstream comics houses. I have dozens of boxes filled with unread comic books. I'm good. But I think the loss will still be a loss.

After posting my comment to Alan’s blog, I kept thinking about the single-issue format.  I enjoy reading single-issue comics.  I wish they had more weight to them, both in page count and their ability to deliver a satisfying story, but I enjoy reading them.  It’s not exclusive.  Single-issue comics and I have an open relationship.  I read and enjoy graphic novels and manga volumes and collections of comic books.  My love for comics is too great to be confined to just one format.

I went to a box of comics I have read and might want to write about in search of satisfying single-issue comics.  Here are some of the ones I found there...

From cover to cover, Aw Yeah Comics! #6 [$3] was 32 slick pages of fun story and art.  The highlight of this issue was “Fixing Good,” an 11-page story about a group of villains who are tired of getting beat up a lot and decide to reform.  I had a personal connection to this story on account of, a few decades back, I pitched Marvel on a series with the same premise starring the Ringmaster’s Circus of Crime.  I think that was shortly after those villains were beaten by Howard the Duck.

Written by Judd Winick and the Catman with art by Franco Aureliani, “Fixing Good” unfolds like a well-told joke.  The villains try and try again to achieve their goal of not getting beat up.  I smiled, I chuckled, I laughed out loud.

From a couple years back, Donald Duck #363 and #366 [BOOM Kids!; $3.99 each] were very satisfying single-issue comics.  In the first of those issues, comic-book creation and marketing was the theme of Geoffrey Blum’s “The Saga of Captain Duckburg” with lively art by Carlos Mota.  The issue also featured a reprint of “Mystery of the Loch” by the legendary Carl Barks and “Somewhere Beyond Nowhere” by Barks and John Lustig with art by Daan Jippes.

Donald Duck #366 had “Donald Duck Finds Pirate Gold...Again!” It’s an entertaining sequel to the very first comics story drawn by Carl Barks (with Jack Hannah).  This new story was written by Abramo and Giampaolo Barosso with art by Giovan Battista Carpi.  You can bet my Spell Check had fun with those names.

All the above issues are suitable for readers both young and old, but the “box” also yielded two Marvel super-hero comic books worth mentioning here.

While Fearless Defenders #11 [$3.99] is part of an ongoing serial, the issue also works as a done-in-one story.  Following the death and resurrection of one character, who now shares a body with one of the other members of the team, the ladies go to Hippolyta’s New Amazonia for a vacation.  The recap you just read is all there in the introductory page of this Cullen Bunn story, but cast as banter between Valkyrie and Misty Knight.

Drawn by Will Sliney - and, damn, does he draw nice - the Defenders party down with Amazons until they get attacked by giant monsters led by Aradnea, a “gothy Atlantean witch,” and Echidna, described thus: “Your mama’s so ugly she gave birth to all the monsters of Greek Myth.” That line made my laugh out loud.

The issue moved the overall story along without burdening readers with overwhelming back story.  The characters were played nicely. The action was were well-done.  The only bad thing about this issue is that it brought us one issue closer to the end of this series, which really deserves to continue.  Sigh.

The last issue from the box was Incredible Hulks #616 from January of 2011.  The lead story is part five or a six-part story in which the Earth is facing destruction.  It’s okay, but I’ve become well and truly bored with the Earth facing destruction month after month in multiple Marvel titles.  The entire human race in those titles should be suffering from paralyzing trauma and have a suicide count well into the millions.  My willing suspension of disbelief isn’t up to this repetitive nonsense.

What did please me in the issue was “Judge of Character,” an eight-page story examining the character and methods of Jennifer Walters, the original She-Hulk.  Written by Tim Seeley with art by the late Al Rio, it did a magnificent job of showing what makes Jen unique among Marvel’s ever-growing legion of Hulks.  If I had put together a “Best of 2011" collection, this story would have included in that volume.  A complete and revealing story in just eight pages.  It’s an achievement Seeley should be proud of.

Posted by Tony Isabella at 2:38 AM