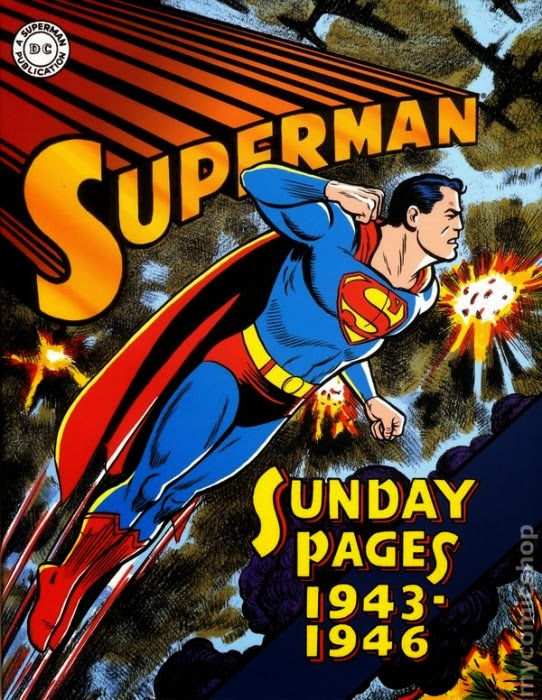 Superman: The Golden Age Sundays: 1943-1946 [IDW; $49.99] answers the question, “What did you do during the war, Superman?” with 170 full-color, full-page Sunday newspaper strips written by Superman co-creator Jerry Siegel and “DC Comics.”  I’m not quite sure what the “DC Comics” credit is all about.  Maybe other Superman writers were involved, maybe some DC editor or executive was grabbing some credit for himself, maybe DC was just screwing with either Siegel or the Siegel estate.  I tend to think the worst of DC, so I will leave further speculation to you.  Besides, I’d rather write about the sheer coolness of this collection.

Reality in the form of World War II intruded rather harshly on the amazing world of Superman.  Here you had a super-hero who, based on his previous adventures, was more than a match for all the armies of the Axis powers.  Yet, since Superman wasn’t real, he couldn’t be shown winning the war single-handed, nor could he simply ignore the conflicts around the world.  The problem was solved in classic Superman style...with a wink and a smile.

Superman constantly assured his readers that our American soldiers and sailors and airmen didn’t need his help to defeat the Nazis and their allies.  Oh, he might blow up a submarine here and there with the enemy’s own torpedoes, but that was just to pass the time while on his way to his more important missions: answering the requests of the American servicemen who were serving their country.  It was an outlandish notion, but it made for entertaining adventures that doubtless put smiles on the faces of those men and women and their families back home.

Siegel was a master of this kind of humorous adventure. I’ll wager most of the stories were written by him.  After a somewhat tedious tale of Nazi agent Eyeglasses trying to discredit an American pilot in training, Siegel has Superman put himself at the beck and call of American servicemen with Lois Lane helping him sort through the stacks of letters.  Most of these “service” missions last but a few weeks. Many deal with matters of the heart. Some address the other forms of loneliness faced by these soldiers.  A few have Superman providing entertainment or some super-service so that our boys in uniform can get a break from their more mundane tasks.  There’s a spirit of national unity in this collection that reminds us of our country’s better angels.

Artists Wayne Boring and Jack Burnley were equally adept at action and comedy.  Their visuals were able to make even the wildest tales believable.  I mostly love this book.

What I don’t love about it is something that was common for the era in which the strips were produced and published. The Japanese, far more than the Nazis, are written and drawn as cruel caricatures of themselves.  Because of the historical importance of these strips, I would never suggest they be omitted or altered.  However, as Mark Waid does in his introduction to the volume, we shouldn’t let the not-at-all-subtle racism go unmentioned.

Superman: The Golden Age Sundays: 1943-1946 is another production of Dean Mullaney and The Library of American Comics.  If they have ever done a book that wasn’t spectacular, I haven’t seen it.  This book is super-spectacular.  I recommend it to one and all.

Archie Double Digest #247 [$3.99] weighs in at 164 pages of comics with a minimum of house ads.  The issues features reprints of funny stories by Frank Doyle, Harry Lucey, George Gladir, Stan Goldberg, Craig Boldman, Bob Bolling and others.  It has also a trio of more unusual stories:

Pat the Brat: “Reign of Terror,” written and penciled by Bob White with inks by Terry Szenics. I was unable to track down the original publication information for this story.

That’s plenty of good reading at a very reasonable price.  As I’ve done in the past, I recommend Archie digests as a welcome change of pace from the grim and gritty comics of today.

An entertaining mini-series from several years ago:

Dracula: Lord of the Undead [Marvel] was a three-issue mini-series by writer Glenn Greenberg with art by Pat Olliffe (pencils) and Tom Palmer (inks).  All three issues are dated December, 1998, so this series probably came out around Halloween of that year.

Greenberg attempts to channel Marv Wolfman in this honestly scary tale. Dracula finds his castle in Transylvania has been ransacked and stripped of what he treasures most, a portrait of his beloved second wife Maria.  This is a prelude to a far more serious matter, a newly-developed serum that, administered to people, makes their blood poisonously fatal to vampires.  The unexpected side effect is that it also kills those injected with it.  Worse yet, the man-made plague is contagious. Both the human race and the vampire race are equally doomed.

While Greenberg can’t match Wolfman’s genius and skill in writing Dracula, he does capture the character at his most villainous. He likewise does a fine job covering Vlad’s back story and that of the mysterious foe behind the attacks on the Count.  The Olliffe/Palmer art is as good as any Dracula art not by Gene Colan. This series is deserving of wider appreciation.

Near as I can determine, Dracula: Lord of the Undead has not been reprinted in trade paperback or hardcover.  At 69 pages in length, it would make for a pretty slim volume. On the other hand, at that length, it would fit nicely into a 80-page comic book for Halloween release.  In the meantime, the series is definitely worth seeking out at your friendly neighborhood comics shop, at conventions and
via online sellers.  It’s a good one.

Posted by Tony Isabella at 3:30 AM