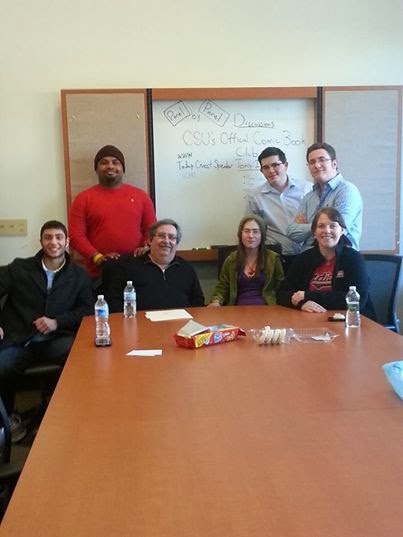 I had a great time Friday afternoon telling stories and imparting - cough, cough - wisdom to Roman Macharoni and other members of the Cleveland State University comics club.  The club meets at the way spiffy CSU Student Center.  The photo above is from the end of the meeting.  I’m so old.

How old am I? I couldn’t remember where I had packed my van.  Okay, that’s not entirely true.  I did remember where I packed my van and would have found it with no problem whatsoever if someone had not put cones across the exit I used when walking over to the Student Center.  This confused me enough that I ended up checking out two or three other garages until I realized the cones had messed me up. Now I’m only confused as to why the cones were there.  The exit I used led only to the outside parking with no way to drive down to the street.  There was plenty of parking inside the garage and even more outside the garage.  I remain befuddled.

Once I got out of the garage, driving in Cleveland proved pretty much like driving through the Hellmouth mentioned in the final TV episode of Buffy the Vampire Slayer.  I completely believe such a thing exists and that it exists in Cleveland.

Road construction kept me from getting on the highway, so I drove down Lorain Road into my childhood neighborhood.  The streets were a minefield of potholes large enough to swallow tires whole.  Yeah, I know it’s been a long hard winter, but the city of Cleveland has got to do better for its citizens.

I forgot to mention that yesterday’s opening illustrations was from the OPUS-One Panel U Submit blog wherein individual comics panels are posted to hilarious effect.  That smooching Legionnaires shot was posted by Tom Peyer, a fine comics writer himself.  I like the idea of using random panels as opening illustrations for the bloggy thing and will be doing more of it.

In the current Mary Worth continuity, Mary has invited her friend Iris and her son Tommy to dinner.  Tommy, recently released from prison after serving his sentence, doesn’t want to go.  He says to his mother, “It isn’t normal to have my past! I won’t be able to bear them looking down on me.”

The sad truth, as I’m sure the wise Mary will tell her guests, is that having a family member who has been or who is in prison, keeps getting more “normal” every day.  I’ll wager that a large majority of Americans will shake their heads in agreement since our country imprisons more people than any other country on Earth.

We have corporate prison management that makes a lot of money from our unending supply of convicts.  We have mandatory sentencing laws that put non-violent offenders away from insanely long sentences, often longer than those served by violent offenders.  We have the hack “tough on crime” politicians who prey on the fear of voters to get elected and then enact foolishly Draconian laws.  Worse of all, we have a “war on drugs” that targets poor and middle-class neighbors and gives a pass to more affluent offenders.  Jim Crow takes on new forms with the ease of a Skrull shapechanger.

I didn’t think it was “normal” to know anyone who has served time in prison or was currently incarcerated.  It shouldn’t be “normal,” but I have a relative currently serving a too-harsh sentence for a non-violent white collar crime.  Other family members and in-laws have done time.  This situation has become “normal” to Americans. It’s a national shame that needs to be addressed sooner than later. We must find a better way.

Adam Baldwin.  He’s an actor who delivered performances I greatly enjoyed in Angel, Chuck and Firefly.  He’s also kind of an asshole. Baldwin is an extreme right-wing parrot.  I tried to engage him in a debate on Twitter once - I was young and foolish, okay, younger and foolish - and found him incapable of expressing even a remotely original thought.  All he did was quote other right-wing assholes or link to columns by right-wing assholes.  I quickly realized he simply wasn’t worth the effort.  He’s a dinosaur waiting for that next comet to vaporize him and his slow-witted kind.

Bleeding Cool reported recently on Baldwin’s tweeting a veritable jerknado of anti-gay comments.  The ones quoted in the article are much what I expected, though Baldwin tends to get crudely insulting when responding to those who disagree with him and, yes, I realize I’m being dismissively insulting to Baldwin.  But I’m not sure Baldwin has a clue as to the image he projects.

I haven’t seen Baldwin in anything that I recall since the shows I mentioned earlier.  If he were in something new, I’d probably watch it. He’s an entertaining if somewhat limited actor and I’d love to see him so busy he doesn’t have time to post nonsense on Twitter. Maybe my good feelings towards Baldwin the actor will change when (if?) I ever see him acting again.  I hope not.  Because as vile as his Twitter comments were, I can’t believe that anyone outside his own doomed to extinction mindset could possibly take him seriously. His is the bleating of an impotent sheep.

I’ve answered this question a few times now, but readers who have not seen those answers keep asking me if I have or will be getting one of the Superman license plates now being offered in the state of Ohio.  The short answer is...no and no.

I have nothing but the highest regard for those Superman fans who labored so hard to get Ohio and then DC Entertainment to create and approve this license plate design.  But I’ve reached the point in my life where I simply could not bear to drive around town with a symbol owned by DC on my vehicle.

No entity has ever treated me as badly, as dishonestly as DC has. I can’t/won’t wear any article of clothing featuring DC characters. I have fond memories of Superman, Batman and other former favorites published by DC.  But, outside of any merchandise featuring Black Lightning, I won’t buy any of it...and I only buy those items with Black Lightning for legal reasons.

Am I absolute in my feelings towards DC? I wish I could say I was, but I still watch shows like Arrow and I still buy the occasional collection of DC material.  Most of the collections feature comics stories from before I entered into my Black Lightning partnership and did any work for the company. I still read or, more accurately, try to read new DC comic books, but I never buy them.  I read the copies loaned to me by a friend.

As I go through my Vast Accumulation of Stuff, there will doubtless be various DC items that once meant a lot to me.  I’ll be selling those with some regret.  But not much.

DC has always had it within its power to make things right with me. I have always been far more reasonable in my dealings with DC than DC has been with me.  For all the joy of creating and writing Black Lightning and a few other features at DC, for all the pride in my work and its positive effects on readers, it’s impossible for me to consider DC and not feel a twinge of pain.

One of the only difficult moments for me at last year’s Comic-Con was listening to my wife Barb explain to a friend how an individual who had greeted us at a hotel restaurant had visited so much grief and loss on me and mine.  My wife is an incredibly generous loving person.  Until that evening, I had only heard her speak ill of two other comics people.  While I wish that individual no ill, I will never understand why he acted as he did for so long.

Pain is part of life. As I get older, I get a few aches and pains that I didn’t have the year before.  That’s life.  But I don’t go seeking pain and that, as much as anything, is why I don’t have a Superman license plate on my car.

Posted by Tony Isabella at 3:17 AM