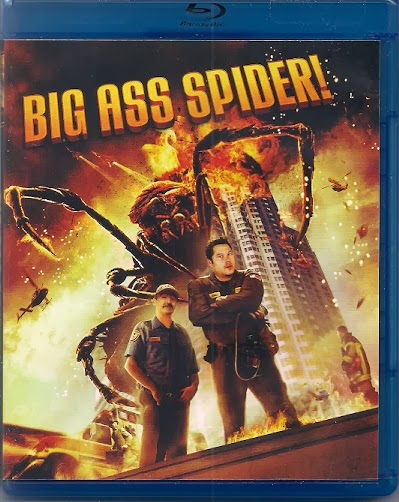 Director Mike Mendez had to fight for the name Big Ass Spider! The  original screenplay for this 2013 movie was titled Dino Spider and the distributors wanted to call it Mega Spider because they didn’t think Mendez’s preferred title was marketable.  Mendez was right. I wanted to see Big Ass Spider! from the moment I heard that title. I didn’t really care if the movie was good or not.  I just had to see any movie titled Big Ass Spider!  Fortunately, it turns out to be a solid and solidly entertaining B-movie.

The basic plot is a familiar one. Crazy military men and scientists mess around with an alien spider.  It escapes, ends up in the body of a victim sent to a Los Angeles hospital by mistakes and escapes from there.  It gets bigger and bigger.  The head scientist wants to capture it alive.  Eventually, though not until Old Big Ass has racked up many victims and done a King Kong climb on a skyscraper, the military parts philosophic company with the scientist.

Greg Grunberg plays Alex Mathis, an exterminator who’s very good at his job and not so good at running a business.  One elderly client pays him in fruitcakes.  When he gets bitten by a non-alien spider, he goes to the hospital where the alien spider was sent.  At this point, no one at the hospital knows the true nature of that spider.  Alex barters his exterminator services against his emergency room bill. The deal is struck.

With security guard Jose Ramos (Lombardo Boyar), Alex tracks down the spider.  He has a decent shot at getting it when the military shows up and allows the creature to escape into the sewer system.  The most notable members of the military are the great Ray Wise as Major Braxton Tanner and Clare Kramer as Lieutenant Karly Brant.  You may remember Kramer as “Glory” from Buffy the Vampire Slayer. I don’t normally comment on the physical appearance of actors, but Kramer, who was gorgeous as Glory, looks beautiful, fit and feisty as Karly. She owns the part of a tough soldier.

You can probably see where this plot is going. Spider gets bigger. People die. Alex and Jose are heroic.  Sparks fly between Alex and Karly.  Things get so bad the military is considering bombing Los Angeles.  In this movie, the excitement starts early on and seldom slows down enough for the viewer to take a breath.  It’s one of the best B-movies I’ve seen in recent years.

Mendez directs the hell out of this picture, which more than lives up to my pre-viewing anticipation.  Grunberg and Kramer are great in their roles.  Boyar drifts into stereotype every now and then, but his character is such a brave sidekick I could overlook that. This is a honestly thrilling adventure with a good sense of humor, right up to the hilarious punch line Wise delivers at the very end of the movie.

Big Ass Spider! is a keeper.  I recommend it to anyone who enjoys giant monster movies even half as much as I do.

Diving back into less-than-classic shark movies...

Sharks are going wild near an African coastal town.  The frequency of the attacks have driven away tourists and devastated the local fishing industry.  The only going concern is a scientific research center researching...sharks.

Hero Casper Van Dien comes to the South African town to look into the death-by-shark of his friend.  Jenny McShane is the sister of his friend.  Bentley Mitchum is Dr. Miles Craven - really, that’s the character’s name - a mad-not-all-bad scientist breeding mutant sharks in the hope their cells will lead to a cure to cancer.  He’s so driven to succeed and reap the fame and wealth of this discovery that he tests his drug on human patients.

Ernie Hudson is the scariest thing in the movie.  He’s the mayor of the town, but secretly plotting to ruin it and buy up the property of his impoverished constituents so he can sell the whole kit-and-caboodle to investors.  He chews more scenery than the sharks chew people.

Two corrupt policeman are the second scariest thing in the movie. They do Hudson’s dirty work, whether its setting up devices which drive the sharks crazy with hunger or feeding anyone who threatens Hudson’s plans to said sharks.

The sharks come in a distant third.  While there is one genuinely scary and realistic attack on a tourist dangling her foot over the side of the boat, most of the close-up shark attacks betray their rubber origins.  Though these sharks appear often enough to remind viewers they exist, human evil drives this story. Not that it’s a particularly riveting story.

Unless you’re on an insane quest to watch every crappy shark movie you can find - I’m well aware of my mania, thank you - Shark Attack isn’t worth watching.  Yet, somehow, someone looked at this movie and said, let’s make Shark Attack 2.

Shark Attack 2 (2000) was a direct-to-video production.  I suspect it wasn’t conceived as a sequel to the first Shark Attack and that it may have started out as a different film that what it eventually became.  There’s a single mention of Doctor Craven’s mutant sharks and that the sharks in this movie might be their offspring, but the conversation strikes me as a afterthought.

Shark Attack 2 starts out with one big shark that eats the sister of Samantha Peterson (Nikita Ager) while the siblings are diving. Samantha manages to stab the shark in the eye before it has her for dessert, but can’t kill the beast.

The shark heads for a resort area and threatens the opening of the area’s Sea World knock-off.  Marine biologist Nick Harris (Thorsten Kaye) captures the shark. Against Nick’s better judgment, the shark becomes a live exhibit at “Water World” and promptly eats a worker in front of an audience before escaping. Harris manages to tag the shark with a GPS tracker, but keeps that information to himself on account of he’s a dumbass.

Though the Water World owner caused this debacle by ignoring Nick’s instructions, he puts the blame on Nick, fires him and hires Roy Bishop (Dan Metcalfe), a dick-ish Crocodile Dundee type to kill the shark. Nick and Samantha team up to get the shark first. The mayor doesn’t want to close the beaches.  At this point, we only have one shark and a movie alarmingly close to Jaws sans likeable characters like Brody and Hooper.

Well into the movie, it’s discovered there are a school of sharks  living in an underwater cave and hunting as a pack.  As there was no evidence or suspicion of this in the shark’s earlier attacks, I think this is where the movie shifts gears. In time for the sharks to eat Roy’s cameramen.  The mayor still doesn’t want to close the beaches. The Water World owner assures the mayor that patrols and a shark net can keep the beaches safe for the big surfing contest. What could possibly go wrong?

One theft of a Jaws scene and several gory deaths by laughable prop sharks later, Nick, Samantha and Roy team up to kill the sharks in their cave.  The trio develop the mutant power to talk underwater, which certainly helps ratchet up the suspense when things go wrong and the one-eyed shark wants another taste of the Peterson family. The good guys win, another Jaws scene gets ripped off, Samantha and Nick makes plans to fornicate.

Shark Attack 2 might be worse than Shark Attack, but it must have made somebody a few dollars because it gave birth to two sequels, Shark Attack 3: Megalodon (2002) and Shark Zone (2003). Yes, I will eventually watch and review those movies as well.  Why can’t any of you see this is a pathetic cry for help?

I’ll be back tomorrow to resume my Los Angeles report with name-dropping guest appearances by Mark Evanier, Stan Lee, and others.

Posted by Tony Isabella at 4:52 AM