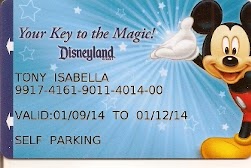 Bob Ingersoll and I arrived in Los Angeles on January 9.  We headed to Disneyland.  In this, my third trip report bloggy thing, I’ll start telling you about our second full day at the parks.  Think of me as your personal key to the magic.

Since we were staying at a Disneyland hotel, we could get into the parks an hour earlier than people who weren’t staying at one of the Disneyland hotel.  I was feeling a tad bit under the weather, so I told Bob to go ahead and I’d meet him later.

I hadn’t slept well the night before - belated jet lag, maybe - and the chilly morning contributed to my lack of energy.  However, when I thought about all the huge Disney fun waiting for me, I rallied quickly and met Bob at the gates before the park opened.

Our first stop was Star Tours - The Adventures Continues.  The ride simulates a ship fleeing from the forces of the Empire on account of there’s a Rebel courier on board.  One passenger is selected at random and their image is shown on a transmission from the Empire forces.  Of course, the ride got it wrong.  I was the Rebel agent. I just used a Jedi mind trick to confuse everyone.

While Bob did a couple rides on his own - I figured the Matterhorn bobsleds might be a little rough on me - I went to the Tomorrowland gift shop.  I immediately fell in love with a black t-shirt printed with the quote “Judge Me By My Size, Do You?”  I had to have it and brought it to the sales counter where, much to embarrassment, the salesperson was a dwarf.  She laughed when she saw the t-shirt and said she needed to buy one for herself.  I asked to have the shirt shipped to the hotel where I would be able to pick it up on Sunday morning.

I met up with Bob at Fantasyland where we road Alice in Wonderland, Mr. Toad’s Wild Ride and Snow White.  The rides are a little dated and slow, but there’s always great craftsmanship to admire as you travel through them.

My earlier fatigue was catching up with me.  Since I wanted to be 100% when we met up with our good friend Marv Wolfman - yeah, that Marv Wolfman, creator of Blade, Bullseye, the New Teen Titans and a whole bunch of other great comics characters - I left Bob at the Peter Pan ride and headed back to the hotel.  I had a sense that’s where I needed to be, which was probably a premonition that I was about to experience my third surprise encounter of this Disneyland adventure.

I walked into the lobby of the Adventure Tower.  I heard a gasp and a tentative “Tony?”  I turned around and saw a woman I hadn’t seen in probably two decades.  Let’s call her “Jenny.”

Jenny used to live in Cleveland and was an occasional customer of the comics shop I used to own there.  She wasn’t into comic books per se, but she would buy fantasy and science fiction paperbacks. We hit it off and became friends.  After the store closed, we would talk from time to time and occasionally meet for lunch.

Jenny’s life had not been easy.  A transgender woman, she faced the discrimination and irrational prejudice you would have expected in those even less-enlightened-than-today times.  She had run afoul of the law a few times and received no justice when she was assaulted. But Jenny was determined to make a good life for herself.  At one point, she moved to Japan and took a decent job there.  Sad to say, she found the same kind of creeps in Japan who plagued her here.  One of these was a brutal man who saw her as some sort of kinky sex toy.  She returned to the U.S. after two years.

Jenny persevered.  When I last spoke to her, she had completed all of her gender reassignment surgeries and was moving to California to live with her elderly mother.  She seemed guardedly optimistic. I’m not sure why we fell out of touch.

Seeing her was a “look at you” moment.  She looked great.  She had married, but was now a widow.  Her beloved husband left her in very good circumstances.  She is involved in a number of charitable and political organizations.  She looked happier than I’d ever seen her before.  She said the same thing about me.  We were both right.

Jenny had stayed at the hotel following a fundraiser the previous night.  She reads this blog and has read several of the books and comics I’ve written. She said she was grateful for my friendship back in the day and, with a smile, added I was one of the only two men she ever truly loved.

She had to be somewhere.  She asked for one of my cards and if I’d mind her mentioning me to people in the entertainment fields.  I’m not sure anything will come of it, but I have learned to never rule out the possibility of good fortune in my life.  I have experienced it again and again as I move through the years.

I don’t know if I’ll ever see or hear from Jenny again.  I am very happy I got to see her at Disneyland and to know she’s doing well. If we never cross paths again, we’re still friends...and I always wish the best for my friends.

When I started writing today’s bloggy thing, my intent was to cover the rest of my second full at Disneyland.  But there’s no way I can top what I just wrote.  Come back tomorrow and I’ll tell you about spending the rest of that Disneyland day with Marv.

Posted by Tony Isabella at 5:15 AM