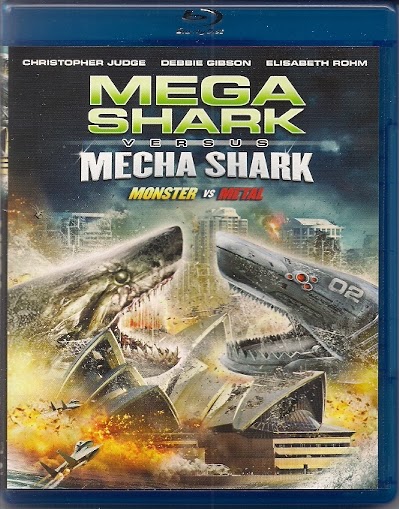 The Asylum starts the new year with Mega Shark Versus Mecha Shark, the third and said-to-be-final movie in the series.  Earlier this week, I received and watched my Blu-ray copy of the film.  Here’s a quick summary:

A (as opposed to the) mega shark emerges from a iceberg being towed by a trawler.  It’s smaller than the mega sharks of the first two movies, but still bigger than most ships.  The world seems somewhat prepared to face this new monster, even to the Americans having a giant mecha shark almost ready to go into battle.  The mega shark isn’t going to go down easily and the mecha shark has a few bugs in the system.  Shark fight!

Christopher Judge and Elisabeth Röhm star as Jack and Rosie.  He’s a scientist who developed the artificial intelligence that will be downloaded into Mecha Shark.  She’s the ace pilot with a drinking problem.  They are also husband and wife and, much to my surprise, their married couple scenes are pretty good.  If you’ve seen Röhm in Angel or Law and Order, you know she has a very limited range. She never quite pulls off the drinking problem, the grief over the death of their child or her determination to save another child in harm’s way.  But she shines in the “married scenes.”

The movie gets off to a slow start.  The mega never looks remotely convincing.  It attacks a ship here and there.  It tries to chomp on a passenger jet in homage to the most famous scene of the first  movie.  It’s as if director Emile Edwin Smith was trying to remind us that the creature is supposed to be terrifying.

Just as Mecha Shark is a nod to Mecha Godzilla, this movie presents a world in which new mega shark attacks are not met with disbelief. Indeed, the world’s governments and scientists keep an eye out for them and try to prepare for them.  Maybe there’s even a Mega Shark Channel for jaded viewers whose appetites for mass destruction are not satisfied by the Weather Channel.

Debbie Gibson reprises her role as scientist Emma MacNeil from the first movie.  Gibson is always fun, but, whenever she appears here, it’s merely to move the plot along with some scientific jibber jab. She should have been part of the action.

Back to the movie...

After fighting out of its weight class, the mecha shark gets tail-flipped onto a dock.  Jack and an injured Rosie lose control of it. The mecha grows treads and starts cruising down the city streets, wrecking buildings, vehicles and people. Jack and Rosie must regain control of the mecha shark and launch their final desperate attack against the bigger, meaner mega shark. The last thirty minutes of the movie are honestly exciting.

Mega Shark Versus Mecha Shark is an okay monster romp.  It has some moments of deliciousness, but is uneven.  I was going to agree that it’s time to put the series to rest until I realized the Asylum has enough giant creatures in its archives to produce its own version of Destroy All Monsters!

Monster Shark is also known as Shark: Red on the Ocean, Devouring Waves and Devil Fish.  If you were this bad of a movie, you would be using aliases, too.

The creature, who looks really goofy whenever the movie is forced to give you a good look at him, is a hybrid created by the military by combining an octopus with genetic material from a prehistoric Dunkleosteus.  Which is an actual super-predator that lived around 360 million years ago and which, judging from the skeletal head I saw on Wikipedia, looked pretty goofy in real life, too.

The creature has escaped from the wacky military and is feasting on tourists on the Florida coast.  There are brave good scientists who want to kill it and there are stupid bad scientists.  Once enough scientists have died, the creature is cornered in the Everglades and destroyed by flamethrowers.  No one dreams that, someday, this crappy movie will be remade as Sharktopus.

The cast and crew from the United States, Italy and Latin America. They couldn’t always understand each other, which was a problem for the movie.  It was always going to be dubbed over.

A sub-plot involves a professor’s wife having an affair with one of the bad scientists and plotting against her husband with her lover.  The sub-plot gives us this line:

For a woman who has the sensitivity of a slut...to the point of giving her lover the identical watch she gave to her husband as an anniversary present, I will not accept lessons.

I watched Monster Shark on YouTube.  The only version of the movie that seems to be commercially available at present is the Mystery Science Theater 3000 version.  Like the movie wasn’t funny enough in its natural state.

I watched Monster Shark so that you don’t have to.  I should get a medal for that.

Posted by Tony Isabella at 6:44 AM