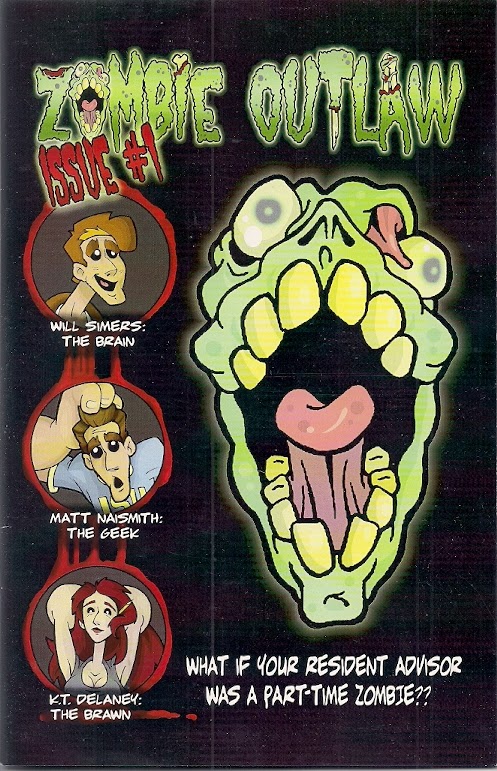 January. Tony is in Los Angeles with Bob Ingersoll.  They have been staying at the Hilton/Universal City.  After failing to sleep on a freezing Thursday night, Tony paid an early Friday morning visit to the front desk to complain about their room’s heating/cooling woes. The problem is fixed on Friday, leading to a pretty good night’s sleep that evening.  Early Saturday morning, two things are slipped under our door.  Both are surprises.

The pleasant surprise was an envelope from Brian Apodaca, the night manager who I’d spoken to regarding the problems with our room.  It contains a letter from Brian and the first two issues of Zombie Outlaw, his self-published comic book. After expressing his hope the problems  had been taken care of, he wrote:

I wanted to say I’m a fan of your writing and I also write comic books, though I’ve yet to draw a paycheck for the endeavor. I have  enclosed the first two issues of my book in case you want to read something on your flight out of town.  I recognized you the other night, but given the issue at hand, I didn’t feel it appropriate to bring it up at the time.  I sincerely hope you’re not offended by this token of appreciation for your contribution to comic books and I wish you the best in your future endeavors.

This is one of the many reasons it truly does not suck to be Tony Isabella.  Though I think my ego is mostly safely under control, I do get a kick out of being recognized by my readers, especially if they like my work.  And who doesn’t like free comic books?

Since I was up anyway, I went down and caught up with Brian before his shift ended.  We had a pleasant conversation and, a bit later, Bob also went down to the lobby to say “hi.”

I can’t say Zombie Outlaw knocked my socks off.  I’m a real tough sell when it comes to zombies of any kind.  But, as soon as I can get a little breathing room on my workload, I’ll drop Brian a note with what I hope will be useful advice/tips for him.

The second and unpleasant surprise was our hotel bill.  The charges weren’t the problem.

We had erred in making the hotel reservations.  We were leaving Los Angeles on Sunday morning, but we didn’t have a hotel for Saturday night. More on that later.

Our last Saturday in Los Angeles was always going to be a relaxing day.  If I remember correctly, we had breakfast at Charlie’s in the Farmers Market and then went to Blastoff Comics at 5118 Lankershim Boulevard in North Hollywood.  Harlan Ellison was doing a signing with his 7 Against Chaos cohorts Paul Chadwick and Ken Steacy.  I’d never met Paul and hadn’t seen Ken in years, so there were already three good reasons to go to Blastoff.

The signing turned out to be a cool event.  Store owners Jud Meyers and Scott Tipton have a great selection of old and new comic books and other items.  With his brother David, Scott has written titles like Angel, Doctor Who, Star Trek and others for IDW.  I very much enjoyed talking to the three of them...and was happy to sign a few Isabella comics for eventual sale to their customers.

Barbara Kesel, one of my favorite editors, popped in to say “hi.” I loved working with her at DC (Hawkman) and would gladly work with her again.  It amazes me that such a talented editor and writer is not working regularly in comics.

Also on hand: Chris Ryall, the chief creative officer and editor-in-chief of IDW and also fine writer...demon photographer Steve Barber, who I know from Harlan’s website and from my own Facebook page...Joel Cotter, another Facebook friend...and the ever-radiant Susan Ellison.  The signing just barely managed to stay below the legal limit for coolness in one place at one time.

Eventually, Bob and I ended up at Mark Evanier’s house.  Mark had graciously allowed us to hang out with him until he had to head to the airport.  We had a great meal at Fu’s Palace where the owner, the lovely Margaret, insisted on buying drinks for Mark’s out-of-town friends.  I only claim to be the most beloved guy in comics. Mark is the real deal.

Mark, Bob, and I spent the evening talking about many things while I kept dozing off.  I just can’t keep up with the youngsters these days.  Around 3 am or so Sunday morning, Bob and I said goodbye to Mark and headed for the airport.

Where nothing was open.

There was no one working at the United check-in desks.  Once someone did open for business, there was no one from the TSA to check the passengers through to their gates.  The United Club, where we had thought we could wait comfortably, wasn’t open.  The powers that be weren’t going to make it easy for us to leave L.A.

Let’s talk about the TSA for a moment.  You know, the agency that has been given ridiculously intrusive powers because my country is filled with frightened paranoids. Near the start of this nonsense, I once saw an old woman with a walker pulled out of the line because she was selected at random for further scrutiny.  She was in line in front of swarthy Mediterranean me who no one gave even a second glance to.  Yeah, she was totally a terrorist threat.

It’s not that I want to be perceived as a terrorist threat by these government stooges.  But, come on, little old lady or terrified-to-be-flying me?  Which would you be more worried about?

Bright-eyed Bob Ingersoll or cranky old coot me? Which would you be more worried about?

I’m embarrassed for my fearful countrymen.  It’s time that we start wearing our big boy and big girl underwear when we consider taking reasonable precautions to guard against threats.  I suggest wearing sexy underwear to give the TSA agents something to really get all hot and bothered about.

We flew from Los Angeles to Chicago on the first lap of our journey back to Ohio.  It was even more pleasant that our first-class trip to Los Angeles.  Alas, our flight from Chicago to Cleveland would be on the tiniest commuter jet I have ever been on.  I think this plane was constructed by StarKist.

The best thing about the flight was that it was short.  The second best thing about the flight was that whenever the jerk in front of me tried to recline his seat, I pushed back and prevented him from doing so.  After a while of this, he took a look back at me.  What we saw convinced him not to challenge me further.  You might think this made me a dick.  On the other hand, I was pre-cleared by the TSA, so I was a government-approved dick.

The final TSA hilarity came after Bob and I landed in Cleveland and discovered that, according to United baggage claim, TSA agents had flagged Bob’s luggage and kept it off the flight so that they could search it.  Of course, it’s possible the United baggage folks were just trying to blame the TSA for their mistake.  But, if they were telling the truth...

Sainted Wife Barb picked me up the airport.  I had a lot of great times with great people on my Los Angeles vacation, but it was just a little too long for me.  I don’t know if I’ll be able to afford to do this trip every year, but I’d sure like to.

My sincere thanks to all my Los Angeles friends.  I love you madly and I hope to see you again soon.

Posted by Tony Isabella at 5:41 AM