THE MOST (ADJECTIVE) BLOGGY THING EVER! 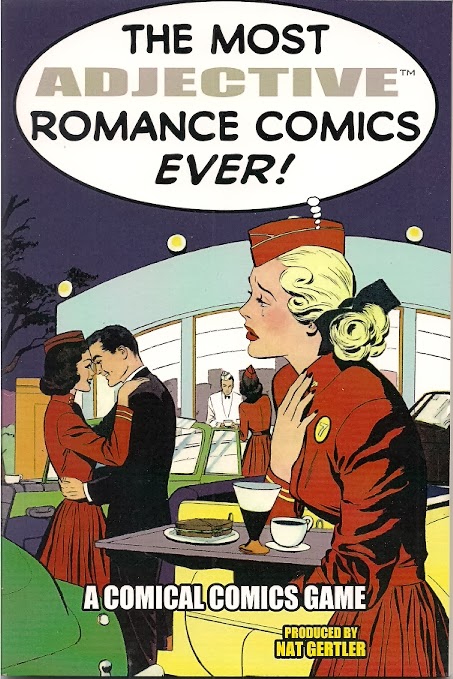 Produced by Nat Gertler, owner/operator of About Comics, The Most Adjective Romance Comics Ever! [$6.99] is an amusing “comics game” in which players fill in words to rewrite old romance stories into wacky new versions.  For example:

The title of one short story is “How to (verb) That Broken Heart!” The opening caption reads:

Gals write us here at (magazine) to ask us what to do when their boyfriend doesn’t (verb) them any more.  Here are our (adjective) tips.

If I were playing, I’d change the title to “How to Weaponize That Broken Heart!” and rewrite the opening caption:

Gals write us here at Guns & Ammo to ask us what to do when their boyfriend doesn’t frisk them any more.  Here are our steel-jacketed tips.

There are 38 pages of stories, re-purposed and condensed from love comics originally published by ACG and St. John from 1949 to 1951. Some tales were originally written by Dana Dutch (St. John) and the artists include Matt Baker, Ken Bald, Fred Kida and Lin Streeter. These 20 short stories are followed by 20 pages of “worksheets” to allow players to fill in the blanks and then read them back to the other players.

If you head over to Amazon, there’s still time to order and receive this book in time for Valentine’s Day.  I think it would make for a swell gag gift and that you and your loved one can have huge fun playing the game.

For more information on what I’m guessing will develop into a line of “most adjective” books, go to the book’s website.

Going through boxes of borrowed unread comic books, I came across a long run of Detective Comics which were mostly written by one of my favorite Batman writers, Paul Dini.  The run started with issue #828 [April 2007] and ran through issue #85 [January 2009].  There was much to like about this run.

The Riddler goes “legit” and becomes a private detective.  This was a refreshing take on the character.  He was far from being a white hat, but he was more rouge con artist than out-and-out villain. He made good use of the deductive skills he used to devote to those stupid clues he’d leave for Batman.  I would have bought a Riddler series based on that premise.

Other Batman villains appeared during the run and usually received some intelligent tweaking.  The Penguin went from boisterous super-villain to “legitimate businessman” while continuing his discreet criminal activities.  Dini crafted a good story from the Terrible Trio (Fox, Shark and Vulture).  There was a Joker story featuring Zatanna that I didn’t hate...and I hate almost all Joker stories. A new Ventriloquist made her debut and finally ditched the single most annoying speech pattern in comics: Scarface always pronouncing his B’s as G’s. About gloody time. Even the “Heart of Hush” serial, which tried to make sense of the incredibly stupid villain created by Jeph Loeb and Jim Lee, was better than anyone has any right to expect from a Hush story.

Other writers also contributed some good tales to this run.  John Rozum and artist Tom Mandrake did a truly chilling take on the Scarecrow.  There were also worthy efforts by Stuart Moore, Royal McGraw and Peter Milligan.

Keep watching this bloggy thing of mine for more comic books from the past and the present.  Even older issues can be found at comics shops, conventions and online sellers.

New Harlan Ellison collections are being published at a staggering rate.  This is terrific news for me because I just plain and simple like my friend’s writing.  I liked his writing from the very first Ellison story I read, the award-winning “'Repent, Harlequin!' Said the Ticktockman.” My admiration for his art, craft and insight has continued to grow over the past four decades.  I’m a better writer for reading his stories and a better man for having his friendship those same past four decades.

Honorable Whoredom at a Penny a Word [Edgeworks Abbey; $39.99] is a collection of fifteen never-collected tales from the first dozen years of Ellison’s career.  Mostly crime stories, they appeared in magazines like Trapped Detective Story Magazine, Suspect Detective Stories, Nightcap and others. There are two stories appearing for the first time, one of them being the revised version of a story from 1960.

This young Ellison is not the brilliant and transformative writer he would become in his career’s second dozen years and since. Yet, as I’ve told him on more than once occasion, there is something in his earliest writings that speaks to me. Even in the least of them, there’s...something...there. When he asked me to pick a short story to adapt into comic-book form for Harlan Ellison’s Dream Corridor, I chose “Opposites Attract,” a 1957 dark comedy about a mad bomber.

Ellison’s early stories have an energy that transcended their oft-lowly surroundings. The dirty cops and driven reporter of “Burn My Killers!” take the readers into dark and violent places. “Riff” is a tragedy set to the sound of a mournful saxophone. I see some Poe - Edgar Allan - in “The Final Movement” and the revised version of “The Honor in the Dying” is a punch in the gut.

Continuing characters are not often found in Ellison’s stories, but there are three tales of claims adjuster/private eye/businessmen’s agent Jerry Killian.  I enjoyed them all and found myself wishing Ellison had written more of them.

Big John Novak, an ex-circus performer turned private eye, appears in “Can Opener.” This was only Ellison’s seventh short story sale and “the first story in the mystery genre to employ a little person as a protagonist.” Though this was intended to be the first story of a series, Ellison never returned to Novak. Dare I suggest it’s not too late? For your old pal Tony?

Honorable Whoredom feels like the 1950s. There is fine storytelling at work in its fifteen tales. They take me back to a time before I had any clue what was going on in the world around me.  They offer glimpses of the Ellison to come.  For all these reasons and more, I recommend this unexpected and most welcome collection.

Closing note.  Last summer at Comic-Con International, I was most honored to appear on the 2013 Jack Kirby Tribute Panel moderated by Mark Evanier and with guests Neil Gaiman and Paul S. Levine.  You can read a transcript of that panel in The Jack Kirby Collector #62 [TwoMorrows; $10.95].  I managed to avoid embarrassing myself while sitting next to the amazing Gaiman.  That alone is worth ten bucks.

Posted by Tony Isabella at 6:39 AM