“BEST” WITH AN ASTERISK 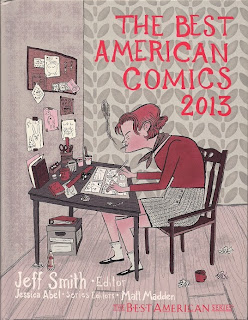 The Best* American Comics 2013 [Houghton Mifflin Harcourt; $25] is
this year’s edition of the anthology series that purports to offer
readers the best* of American comics.  Jessica Abel and Matt Madden
are the series editors, though this volume is their farewell to the
series.  Jeff Smith is this year’s guest editor.  The asterisk that
follows the word “best” in reference to the series and volume is my
doing for reasons that will soon be clear.

I buy and read The Best* American Comics every year.  The anthology
always leaves me angry and more than a little sad.  Because though
the series proclaims its offerings to be the best, the editors are
and have always been entirely in the tank for alternative comics,
independent comics and generally any comics that do not come out of
the mainstream of comics.  It’s a hipster country club that denies
membership to brilliant and skilled comics creators because their
work doesn’t conform to the editors’ artsy-fartsy notions of great
comics.  I’d be thankful for the departure of Abel and Madden if I
didn’t fear their replacement will be of the same mind set.

In his introduction, Smith implies contempt for the mainstream and
seems to ignore even the possibility that good comics can come from
the collaboration of a writer and an artist.  Only “cartoonists” -
those who both write and draw their own comments - are welcome at
The Best* American Comics country club.  However, in the interest
of accuracy, I mention that, despite Smith’s introduction, three of
the 30 comics in this volume are writer and artist collaborations.

Nothing from Marvel and DC is represented in this volume, though I
would make the case there were Marvel comics by creators like Mark
Waid and Matt Fraction that are as good as the stories selected by
Smith and company.  I suspect my readers could name several tales
from other mainstream publishers that were also worthy of appearing
in any collection of best American comics.  Again, in the interest
of accuracy, Dark Horse Comics has five entries in this anthology.
However, the overwhelming impression is that mainstream comics are
not welcome in the country club.

There is, as always, some amazing work in this year’s anthology.
Alison Bechdel, Brandon Graham, Craig Thompson, Eleanor Davis, Derf
Backderf, Terry Moore, Laura Park, Jeremy Sorese, Evan Dorkin, Paul
Pope, and others certainly deserve to be in this book.  In a couple
other cases, excerpts from graphic novels were too poorly selected
to convey the quality of those graphic novels.  Yet, interspersed
with the genuine gems, were entries whose writing was clumsy, whose
visuals were crude and unconvincing, whose storytelling was murky
for the sake of murkiness and whose lettering was of such slapdash
fashion that it made the reading of the entries painful.  These are
the undressed emperors of this anthology, darlings of those artsy-
fartsy types who want to believe their senses are so refined they
can see quality where little or none exists.

Yes, I will buy and read The Best* American Comics 2014.  Because
there’s always the chance that next year’s anthology will be what
I think it should be...at least until Lucy or whoever next year’s
editor is pulls the football away from me.

Mark Waid is my favorite current super-hero writer except on those
days when a new issue of Kurt Busiek’s Astro City makes its way to
me.  Waid has a knack for taking characters who are part of a vast
universe - like Daredevil or the Hulk - and making them seem fresh
and new again without dumping the work of previous writers.  He’s
also created some terrific super-hero titles of his own, like, for
example, Incorruptible and Irredeemable.  In short, Waid is one of
the best in the comics industry.

The best baseball player in the world doesn’t bat 1.000.  Even so,
it was with considerable sadness that I read and called six strikes
on the first six issues of Dynamite’s Waid-written The Green Hornet
[$3.99 per issue].  Drawn by Daniel Indro and Ronilson Freire, the
series is set in 1941 before the United States entry into World War
II.  Classic characters. Classic setting.  What went wrong?

What went wrong is that Britt Reid, the Green Hornet, is a dick in
this series.  And not just a dick.  Britt Reid is a colossal dick.
He’s arrogant.  He’s callous.  He makes stupid decisions.  He takes
his “super-criminal” act so far that he actually becomes a criminal
without ever truly acknowledging that.  He’s not as bad as the foes
he fights - they’re freaking Nazis after all - but he’s pretty bad.
He’s unpleasant as Reid and vicious as the Hornet.  His moment of
realization that he was a colossal dick and that he had gone well
off the rails, that never really comes in the six issues.  Reading
them became a chore.

The other supposedly positive characters aren’t much better.  Some
are cranky zealots.  Most make bad choices.  I kept looking for one
character to hang my hat and hopes on, but I never found one.  For
the first time in years, Waid disappointed me.

My comics doctor, concerned about this sudden bout of depression,
told me to read three issues of Indestructible Hulk and call him in
the morning.

The Fox #1 [Red Circle; $2.99] is Archie Comics’ latest venture in
the super-hero genre.  The Fox is photo-journalist Paul Patton who
is carrying on in the mystery man tradition of his father.  He has
a wife and a son and, unfortunately, super-hero shticks that scream
“We’ve seen these before!”  Yeah, today has really turned out to be
my day of disappointment.

Plotter and artist Dean Haspiel is a tremendous talent.  In one of
the issue’s several text features, he talks about the Fox being a
great visual and he’s right.  Just looking at the character gives
me lots of ideas for images and storytelling.  However, beyond the
visual possibilities, there’s not much going on here.

The stories - there are two - have a dated feel to them.  Dated as
in old “Pop Art” Batman.  Dated as in the craziness of the Mighty
Crusaders comics from the 1960s.  The art pops from the comic book,
but it doesn’t pop with any substance.  Even with Mark Waid doing
the scripting, the comic book feels lightweight.

The Fox describes himself as a “freak magnet,” which was the Blue
Devil’s thing when that character was written by his creators Dan
Mishkin and Gary Cohn.  Here, the notion seems out of place for an
otherwise street-level super-hero.

Maybe I’m just a grumpy puss today, but The Fox didn’t do anything
for me.  The MLJ/Archie super-heroes have a spotty, decades-long
history that has seen just about everyone get a crack at them and
do them badly.  The bright spots have been few and far between.  I
was hoping Haspiel and Waid would pull it off.  Sigh.

Posted by Tony Isabella at 4:34 AM