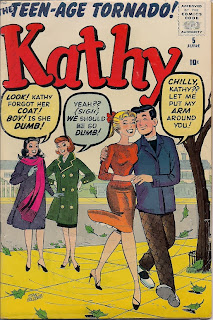 Kathy by Stan Lee and Stan Goldberg is one of my guilty pleasures.
As much as can be said that I collect an old comic-book series, I look
for and occasionally buy old issues of Kathy.  There were 27 issues
published from October 1959 to February 1964.  I have three, maybe
four issues of the series.  I’m pretty sure there’s a first issue
somewhere in my Vast Accumulation of Stuff and, as of this week, I
also own Kathy #5 [June 1960].

The Kathy stories in this issue run from a single page to 4 pages.
There are a couple pages of half-page gags.  There’s a Kathy paper
doll page with three dresses designed by readers.  There’s a black-
and-white “Design Your Own Patterns” page.  There’s a pin-up page
that’s also in black-and-white.  There’s a two-page prose story of
the kind I never read.  All in all, readers got 25 pages of comics
and features for their dime.

It wasn’t until this moment that I thought about why I like Kathy.
I enjoy Stan Lee’s teen humor writing, but I can’t say this is his
best work in the genre.  I love Stan Goldberg’s art of this period.
It’s freer than his later work for Archie Comics.  Kathy and the
rest of the cast aren’t blindingly original or anything.  Somehow,
the sum of these parts adds up to a very enjoyable whole.  Whether
I can explain it or not, I just like this title a lot.

One more thing about this issue.  There’s a bit of corny dialogue
that, filtered through our modern sensibilities, made me just a bit
queasy.

KATHY’S MOM: Kathy has been reading that one letter all afternoon!
Do you think she feels all right, dear?

This week, I read Guardians of the Galaxy #0.1-007 plus Guardians
of the Galaxy: Tomorrow’s Avengers #1.  What with Marvel publishing
so many Avengers titles, I’m seriously consider changing the name
of my blog to Tony Avenger’s Bloggy Thing.  I think my line-up of
heroes would consist of Misty Knight, Tigra, the "Friend" from Ghost
Rider and It the Living Colossus.

GOTG #0.1 was a much better comic.  Written by Brian Michael Bendis
with art by Steve McNiven (pencils) and John Dell (inks), it covers
the birth and childhood of Starlord Peter Quill.  Getting all that
background before the regular series worked for me.  It gave me a
good sense of the main protagonist.

Written by Bendis with art by McNiven, Dell, Sara Pichelli and a
few others, the ongoing Guardians of the Galaxy title is fun. Iron
Man is hanging out with the Guardians and it’s amusing to see the
usually smartest guy in the room Tony Stark struggling with being
something of a cocky yokel.  The banter between Stark and Quill is
generally entertaining, but it does get old on occasion.  What is
already incredibly old and annoying - besides me - is the frequent
“Murdered you” exclamation of Rocket Raccoon.

In other GOTG stuff...Earthlings messing around with time travel is
the equivalent of leaving a steamy poop on the nice white carpet of
the other civilizations in the universe and they’ve ruled Earth is
off limits and in need of extreme punishment.  Quill’s father turns
out to be a complete jerk and has nefarious plans for the universe.
Thanos is back and Angela has crossed over from the world of Spawn
and various lawsuits to appear in the series.  Groot continues to
be wonderful in so many ways.

I’m enjoying Guardians of the Galaxy.

Bela Lugosi’s Tales from the Grave #4 [Monsterverse; $3.99] packs
a lot of story and talent into its 32 pages.  Published and edited
by Kerry Gammill, the mostly full-color issue has scary tales that
don’t descent into mindless gore or depravity, as well as some cool
features for fans of classic horror and monsters.

The best stories of the issue were “The Evil Eye” by Lowell Isaac
and “The Monster” by writer Ed Polgardy with artist Rob E. Brown.
Both are tales of childhood cruelty and the consequences thereof,
but are different enough that I didn’t notice that until I started
writing this review.  The latter story employs a duo-tone coloring
more effective than full color would have been for the tale. I was
also impressed by Gammill’s poetic “Prince Vlad’s Banquet” with
stunning art by Bill Sienkiewicz.

Bela Lugosi’s Tales from the Grave seems to be an annual release,
timed to hit the comics shops just before Halloween.  I’m looking
forward to next year’s issue.

A reader asked why I haven’t reviewed any of the new Valiant comics
titles, which he enjoys very much.  There’s nothing nefarious about
this omission, just economic and personal realities.

Valiant hasn’t sent me any review copies of its titles, which isn’t
surprising.  Few publishers still do that.

The good friend who loans me his comics after he reads them doesn’t
buy any of the Valiant titles.  So I don’t see and read them that
way.  I’ve probably read and maybe even reviewed a Free Comic Book
Day offering from the publisher, but I honestly don’t recall having
done that this year.

My own limited comics buying budget goes mostly to collections of
classic (and not so classic) comics, old comics, some manga and an
assortment of titles that generally don’t include series that are
part of some fictional universe.  For example, I don’t buy any DC
“New 52" titles.  I prefer self-contained titles.

What I can do is look into to whether or not Valiant has released
any collections of its current titles and see if those collections
are available through my local library system.  If they are, then
I’ll start requesting them.  That doesn’t guarantee reviews - that
depends on whether I like or hate them a lot and if I have anything
interesting to say about them - but it’s the best I can offer that
disappointed reader.

Posted by Tony Isabella at 5:50 AM