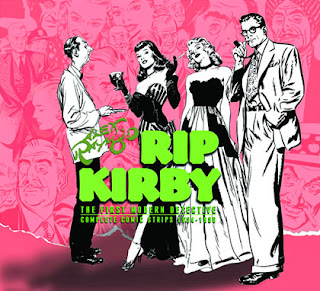 Courtesy of my local library system, I’ve been having a ball these
past several weeks reading IDW’s gorgeous Rip Kirby by Alex Raymond
volumes ($49.99).  They are four volumes of Raymond’s work on this
modern detective strip and they are part of the wondrous Library of
American Comics series edited and designed by Dean Mullaney.

I have very little history with Rip Kirby.  I’m pretty sure he was
in one of the local newspapers, but our house only got a newspaper
on the one day of the week my father could read it because it was
the only day he didn’t have to get up early to either make bread at
the legendary Isabella Brothers bakery or deliver it to the stories
who sold said bread.  That made it hard to get attached to or even
follow strips, though somehow I still got hooked on Lee Falk’s the
Phantom during this period.  But I digress.

Raymond is best known for Flash Gordon, but, when he came back from
his World War II service, the syndicated had hired another artist
to draw Flash.  Rip Kirby followed thereafter.

Flash Gordon was a gorgeous strip with fantastic elements, but it
never hooked me the way Rip Kirby did once I could read the strip
on a regular basis.  Yes, Raymond had died tragically by then and
I was actually reading the strip as drawn by John Prentice, but it
still caught and kept my interest.  Reading Raymond’s run has made
me realize Prentice had been following an insanely tough act.  As
much as like the later Rip Kirby strips, these Raymond stories are
even better.

I like the Rip Kirby cast of characters.  Rip is this cool
detective who plays piano, is crazy smart, gets involved with some
of the most beautiful women ever to grace the comics pages and has
adventures that take him all over the world.  Butler Desmond, who
is a reformed criminal of some sort, is feisty and loyal and very
clever himself.  Girlfriend Honey Dorian is trouble-prone and too
understanding of Kirby’s involvements with other women - Hey, Rip,
just because they throw themselves at you doesn’t mean you always
have to catch them - but she’s one of the more likeable beauties to
grace the strip.

Rip Kirby is a tough strip.  For all the glamor and there’s a lot
of glamor, there are also some truly despicable villains. Killers,
kidnappers, blackmailers and con men.

The Mangler is Kirby’s most persistent foe.  He’s as brutish as Rip
is skilled and with a predatory animal’s cunning.  He’s the perfect
counterpart to the suave detective.  I’m not big on villains coming
back again and again, but every Mangler appearance in these books
has been exciting.

Auto enthusiast Raymond died in a car crash.  He was at the height
of his artistic chops when he died too young.  Prentice came on to
finish Raymond’s last story and stayed around for four decades and
change.  IDW has published two volumes of the Prentice work and I’m
looking forward to reading those.

General recommendations. Rip Kirby is a great strip and well worth
reading.  The Library of American Comics is a tremendous publishing
program and awards should be heaped on Mullaney, IDW and everyone
else who makes it possible.  Books like these are why our present
time is the real Golden Age of Comics.

The Tony Isabella Message Board was part of the World Famous Comics
website for many years.  It was the best and the most classy of the
message boards hosted at that site by the amazing Justin Chung.  It
was a place where lifelong friendships were formed.

Somewhere along the line, the message boards became known as Comics
Community and were hosted/sponsored by Kevin Smith’s “View Askew”
website.  This was not a good fit.

When I objected to the crudity found on Kevin Smith’s website - I
recall the logo being a crap-filled toilet - I added a disclaimer
to my message board telling my visitors that the presence of such
material and whatever advertising appeared on my message board was
not approved or endorsed by me.  One of Smith’s employees went into
hissy fit mode fit about my comments, but I stood my ground and
changes were made.

Well over a year ago, Comics Community shut down and it hasn’t been
back since.  I spoke to Justin about removing my message board from
that website, but the people who run Smith’s website have not yet
responded to Justin’s request for the coding he needs to move the
message board back to World Famous Comics.  I was willing to foot
the bill for my message board, but it’s been so long since then, I
have decided to just accept that Kevin Smith and View Askew don’t
care about Tony people.

The Tony Isabella Message Board that launched at World Famous and
was done in by Comics Community is dead.  It won’t be coming back.

The new Official Tony Isabella Message Board, launched by my good
friend Jim Guida, can now be found on Facebook.  Yes, the message
board is now a Facebook group with all the benefits and occasional
unpleasantries attendant with being a Facebook group.  But it’s a
pretty nice place and getting nicer all the time as old pals find
their way to it and new pals sign up.  I invite you to sign up for
the new message board, enjoy the content being posted there and add
appropriate content of your own.

I want to thank the good people at The League of Extremely Nostalgic
for hosting their “Tony Isabella and Friends” forum while I was trying to
suss out what I wanted to do with my message board.  Having made my
decision, that forum has closed.  But I appreciate all they did to make the
Tipster feel welcome.  Please visit their other forums.

Posted by Tony Isabella at 5:17 AM