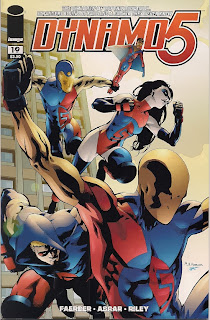 Not all of them.  Sometimes, whether a comic book is good or lousy,
I don’t have anything to say about it.  Sometimes, I don’t review
something because it’s so bad I would feel like a schoolyard bully.
Always, I support the notion that, if you want to make comic books,
then, by gosh, make comic books.  If they only please you, they’re
still worth doing just for the love of the art form.

I seldom review comic books as soon as they hit the stands. Nothing
against those online reviewers who rush home from the comics shop,
read their new comics immediately and then write and post reviews
before the next dawn.  I simply like to read and write about comic
books at a more leisurely pace.

I sometimes review comic books that hit the newsstands years ago.
If I find them worthwhile, I want to write about them.  Besides, in
this age of comics shops, countless comics conventions, hardcover
and softcover collections of comics, eBay and other online sellers,
I figure my readers can find just about anything I write about if
they are motivated.

I read over two dozen issues of Dynamo 5 over the weekend, dating
from September 2007 to October 2010.  Created by writer Jay Faerber
and artist Mahmud A. Asrar and published by Image, the super-hero
series stars “five strangers bound by fate and a father they never
knew.” I liked it a lot.

Here’s the basic premise...Captain Dynamo, also known as “Captain
Can’t Keep It in His Pants,” was a powerful but promiscuous super-
hero who fathered the five main characters.  The young heroes are
unaware of their heritage until their super-powers are triggered by
Dynamo’s ex-wife, a former government agent.  Each of the kids has
one of the Captain’s powers, which weird genetic thing stretches my
willing suspension of disbelief more than a little.  Even so, the
book and its characters caught my interest and kept me reading with
anticipation throughout all those issues.

There’s a lot of reasons to like this series.  The kids deal with
their new situation in realistic ways.  They have to make decisions
they could have never dreamed they’d make until they are faced with
some of those situations.  There’s plenty of super-hero action and
human drama.  There are guest appearances by other heroes from the
Image line and, in every such appearance, the heroes are inserted
into the book smoothly with the readers getting enough information
to know what’s going on.

There was supposed to be a new Dynamo 5 mini-series in 2011.  Alas,
that has not yet materialized.

Dynamo 5 might not be an award-winner, but it’s always entertaining
and very good.  I hear so many complaints from super-hero fans who
are no longer enjoying DC or Marvel super-heroes.  Here’s a series
I believe they would enjoy. In the meantime, it would be well worth
the effort to seek out the already published issues.

Alpha: Big Time [Marvel; $2.99 per issue] is a five-issue series by
writer Joshua Hale Fialkov with art by Huno Plati.  Alpha is a kid
named Andy Maguire who, on a field trip to Horizon Labs, ends up on
the wrong side of a Peter Parker experiment gone awry.  Andy gets
super-powers, gets reckless, gets shut down and then gets another
chance to use his great powers responsible.  It’s a pretty blatant
attempt to duplicate Spider-Man.  The series is generally readable,
but it always seems familiar, as if I was rereading it rather than
reading it for the first time.  There’s nothing really new here and
no compelling reason for the character or series.

I like that the series is set in Pittsburgh.  I don’t like that one
major villain escapes easily and another retains the free rein of
Pittsburgh he’s enjoyed prior to Alpha’s arrival.  I like Andy and
his supporting cast.  I don’t particularly care for the art.  The
series never rises to a level where I want to read more Alpha or
recommend the series to you.  It’s just there.

Alpha is scheduled to return in Amazing Spider-Man #800, not that
I have a clue what the issue number actually represents in this era
of confusing Marvel title changes and relaunches.  I was an honors
math student in high school, but I’m lost when it comes to how both
Marvel and DC number their comics these days.

I’m a year behind on DC’s Batman titles, so I just read Batman #0
[November 2012], which is part of what was an entire month of zero-
numbered DC books.  Because that never gets old.

There was two stories in this issue.  “Bright New Yesterday” is set
early in Batman’s career, before Bruce Wayne has donned his cape-
and-cowl ensemble.  Written by Scott Snyder and very nicely drawn
by Greg Capullo (pencils) and Jonathan Glapion (inks), this story
shows - apparently - Bruce’s first encounter with the Joker before
the Joker becomes the Joker.  It reveals the Joker was a homicidal
criminal and mass murderer before he became the Joker, which takes
most of the edge off the Joker’s origin and modus operandi.  Which
makes me wonder...what’s the point?

Confession.  “What’s the point?” is the question I ask of most DC
super-hero comics these days.  Go figure.

“Tomorrow” - the second story - is written by James Tynion IV and
drawn by Andy Clarke.  We get to see the reactions of various young
characters to their first look at Batman or the Bat-Signal.  It’s
not a bad quick little story and I thought it was better realized
that the issue’s lead story.

Posted by Tony Isabella at 5:35 AM