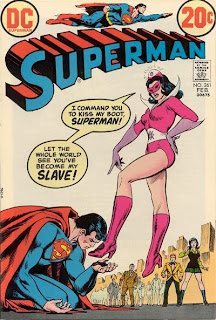 ﻿Nick Cardy, one of the very best artists ever to grace comic books
and one heck of a nice man, has reported to his new assignment in
some world beyond this one.  A tank driver during World War II, he
somehow never drew DC’s “Haunted Tank” feature.  But he did apply
his incredible talents to a variety of comic strips and comic-book
features, including Tarzan, Lady Luck, Casey Ruggles, Gang Busters,
Tomahawk, Aquaman, Teen Titans, Brave and the Bold and Bat Lash, as
well as mystery and romance stories.  He leaves behind a family of
friends and fans who will miss him dearly, even as they honor him
with remembrances of his artistry and friendship.

So, why, you ask, with all the great Cardy covers and comics I had
to choose from, does that silly Superman cover appear at the head
of today’s bloggy thing?  Patience, my beloved readers, I will get
around to the telling of that tale and the explanation why I chose
to run it today.

Cardy’s Aquaman, Brave and Bold, and Teen Titans were favorites of
mine during the 1960s, but it was the fluid action and humor of Bat
Lash that sealed the deal and made me his forever fan.  I wasn’t at
all surprised when Cardy started drawing a dozen or more DC covers
every month.  The same sense of the dynamic, the same capturing of
a key moment found in his interior work translated very well to the
covers.  Even that classic “Kiss my boot” cover, of which we shall
speak very soon.

I met Cardy at a comics convention, but I can’t remember which one.
I told him how much I loved his work, which I’m sure no one other
than everyone had ever told him, and he accepted the praise with a
characteristic friendliness.  I would later contribute a few words
to The Art of Nick Cardy, probably something about having the hots
for Mera and Wonder Girl when I was younger.  Oh, don’t look at me
that way.  You probably felt the same way, no matter your gender or
sexual orientation.  The man knew sexy.

There are days when it is incredibly cool to be me. Like a recent
day when the phone rang and the caller was Nick Cardy. Yes, *that*
Nick Cardy, the legendary artist of Bat Lash, Aquaman, Teen Titans,
and countless other great comic books. Tough as the comics industry
can be, moments like that make me feel all the excitement of my
first days in the business.

The esteemed Cardy was called to see if I had read and had any
comments on Nick Cardy: Behind the Art [$34.95], a spiffy hardcover
book published in 2008. He hadn't seen any reviews of the book and
was seeking feedback. I hadn't seen the book - I'm thinking it got
misfiled in the chaos of my accumulation of stuff - but immediately
ordered a copy.

Written by Cardy, Behind the Art is more than a mere collection of
his work. It has dozens of illustrations, paintings, sketches,
comic-book covers, and comic-book pages, all enlivened by Cardy's
informative discussion of how he approached each work and how he
brought them to magnificient completion. There are portraits of his
late wife Ruth, commercial pieces, examples of his early and later
comics work, trip drawings, breathtaking paintings, and more. The
book is part career overview and part art instruction. Even to a
common word-slinger like myself, it delivers invaluable insights
into the visual possibilities of comics.

With editing and design work from Eric Nolen-Weatherington, and an
intro by Todd Dezago, Nick Cardy: Behind the Art should be part of
any serious comics library. It earns the full five out of five
Tonys.

A few days later, Cardy called to thank me for the review and, as
I recall we spoke for about an hour.  During that conversation, I
told him the strange story of Tony Isabella and the “Kiss My Boot”
cover.  The great man laughed with glee at the tale’s unfolding and
that made the cover even more special to me.

This is where your patience gets rewarded:

It was 1973.  I had moved to New York to work for Marvel Comics in
October of the previous year.  My “desk” was a drawing table in the
Sol Brodsky part of the Marvel offices.  Sol and I shared the space
with George Roussos and a revolving roster of production people and
artists.  Good times.

I was somewhat dismissive of what DC was doing with its super-hero
comics at the time.  Many of their covers depicted its characters
in demeaning positions, but almost none more so that the Superman
cover shown above.  To me, that cover represented everything that
was wrong with how DC treated its super-heroes.

I’m not sure where I got the idea to get a full-size photostat of
the cover to hang over my desk.  It might have been my idea or it
might have come from one of my friends at DC Comics.  In any case,
a DC staffer made the photostat and smuggled it out of DC for me.
I was thrilled to have a constant reminder of Marvel’s superiority
- They hired me, didn’t they? - above my desk.

Sol humored me, so did Roy Thomas.  Most everyone else who saw the
cover thought it was funny and perhaps that I was a little strange.
Naive Roman Catholic boy from Ohio that I was, it never occurred to
me that this cover was basically fetish artwork.

Then Stan Lee saw it.  He didn’t mention it to me.  He just sort of
paused mid-sentence in whatever he was telling me at the time and
then, a beat or two later, continued talking.  The silence of the
Stan was unsettling.

That afternoon, Sol informed me Stan wanted the cover taken down.
Stan understood why I had put it on the wall, but it bothered him
to have a Superman cover hanging in the Marvel offices.  I took it
down and it was never mentioned again.  I keep hoping to find the
photostat in my Vast Accumulation of Stuff, but it’s likely lost to
the ages.

Cardy thought this was hilarious.  I think he thought it was more
hilarious than I did.  I also realized he was so much cooler than
I could ever hope to be.

Others will have better Nick Cardy stories to share with you.  He
was a great artist and a great friend to many and a great man like
we need many more of.  One of the blessings of my career in comics
has been getting to know, even slightly, men like Nick Cardy.  The
biggest sorrow of my career in comics is saying farewell to them.
Yet here we are.

Safe journey, Mr. Cardy.  Thanks for all the great comics you left
behind and thanks for being the kind of man you were.  You will be
remembered and you will always be loved.

Posted by Tony Isabella at 6:20 AM