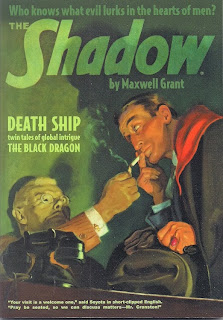 Recently published by my pal Anthony Tollin’s Sanctum Books is The
Shadow #76: “Death Ship” & “The Black Dragon”. These classic pulp
tales were written by Walter B. Gibson, writing as Maxwell Grant.

“Death Ship” was first published in the April 1, 1939 issue of The
Shadow Magazine. From the back cover:

With his alter ego compromised, The Shadow rises from the Pacific
Deep to confront Japanese agents and retrieve the U.S. Navy’s top-
secret Death Ship.
“The Black Dragon” ran in the March 1, 1943 issue, one year after
the Japanese attack on Pearl Harbor.  From the back cover:

At the height of World War II, The Shadow and Myra Reldon combat
the treacherous plots of the Black Dragon and his sinister secret
society.

Of course, no Sanctum Books release would be complete without the
historical essays and insights of Will Murray.  In this volume, he
gives us background information on the stories in “Interlude” and
follows that with “The Man with The Shadow’s Face” wherein Murray
discusses the model for the famed crime-fighter.

Posted by Tony Isabella at 4:11 PM