GETTING MY DUCKS IN A ROW 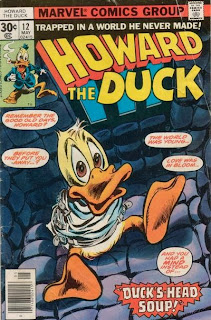 If I had to describe myself in just two words, those words would be
“happy” and “overwhelmed.” Maybe that will change in a week or two,
but it’s where I am at this moment in time.

I’m happy for all the reasons I’ve expressed in the past - a great
wife, great kids, great friends, great home, great life - and some
I literally cannot express.  Recent good happenings will allow me
to finally get to work on some of the hundred or so projects on my
bucket list of things I want to write before I kick the old bucket.
It looks like they will also allow me to visit friends in both Los
Angeles and New York in early 2014.

The overwhelmed part comes because I have all sorts of stuff that
has to be handled before I can hit the writing and the road.  But
I get up every morning and chip away at the tasks that lie between
me and my plans.  My goal is to enter 2014 with my desk cleared and
my ducks in a row.  I’m a man on a mission.

Last week, Heidi MacDonald posted “Comics have hit puberty...and
it’s not pretty” at The Beat.  The article and the heated responses
to it discuss sexism in the comics industry, citing several examples
of gender discrimination, sexual harassment and dick-ish behavior
that, while not illegal, was certainly skivvy.

Articles like this make me terribly sad because the teenage Tony
who wanted to work in the comics industry more than anything else
he could imagine would be crushed to discover the industry is prone
to the same ills as other businesses.  The much older Tony doesn’t
handle the concept any better than his younger self would have back
in the day.  It hurts my soul when I hear of or witness incidents
of sexism, racism, sexual discrimination, sexual harassment, racial
discrimination, racial harassment and the by now expected corporate
cruelty, dishonesty and general douchebaggery.

Whenever I read an article on this or related subjects, I respond
neurotically.  Did I ever see behavior like this and fail to offer
assistance? Did I ever commit such behavior? After four decades in
the comics industry and a few serious thumps to the head before I
got the hell out of New York, the answers to such questions aren’t
always at my command.  I’m fairly certain I’m a reasonably evolved
male, but maybe I committed offense at some past time without being
consciously aware of it.  I don’t think I have, but forty years is
a very long time.

I tried to write on this subject last week, but I ended up with a
lot of anecdotes that weren’t really on point.  I haven’t worked in
the offices of a major comics company since 1976.  I haven’t even
written for a major comics company in two decades.  All I can do is
react to the reports being shared by comics industry people who are
more active in the field that I am.  My shock and horror at these
things come from my soul and not any recent experience.

I may get around to sharing my semi-related anecdotes with you at
some time in the future.  But, right now, I’d rather listen to the
reports of those more recently involved in these things.

Validation is a terrific online comic by writer Christian Beranek
and artist Kelci Crawford.  Ally, the strip’s lead character, is a
transgender girl who is a comics fan and cosplayer.  In the latest
strips, Ally and a friend have found themselves at odds with comics
writer Gary Howard.

Howard proclaims cosplayers are not “real fans” and that they only
cosplay because they want attention.  He seems to think only people
who actually make comic books can decide if someone is a real fan
or not.  Don’t worry.  I’m not gonna debate a fictional character
here, but I will take issue with the real life inspirations for Howard.

I love cosplay and cosplayers.  They make me smile, even when their
costumes might not be the best choice for their body types.  Heck,
I’m a short and tubby old man.  What do I care if someone wants to
be Wolverine or Wonder Woman for a day?  Why should Howard
and his real-life ilk deny them their fun?

And what’s a “real fan” anyway?  I don’t recognize half or more of
the costumes I see at conventions because I don’t play video games
or watch much anime.  I don’t always recognize some of the variant
versions of DC and Marvel characters.  Some cosplayers might never
have read a comic book featuring the characters they portray.  Big
freaking whoop.  If they love the character in whatever form they
encountered the character, that’s fan enough for me.

The moral of this story is:

Cosplayers good, arrogant asshats bad...and you should be reading
Validation.

If you weren’t absolutely charmed and thrilled by the adventures of
Batkid in San Francisco last Friday, then you are dead to me.  I’m
sure some of the usual online idiots made various cruel jokes about
five-year-old Miles, but their souls were long ago sucked away by
the video games they play in their parents’ basement.  The rest of
us...we love Batkid.

Don’t tell the Penguin or the Riddler, but Batkid was five-year-old
Miles, who has battled leukemia for three years and who recently
completed his treatment.  Thanks to the Make-A-Wish Foundation, he
was able to achieve his dream of being Batman for a day.

Several blocks of San Francisco were turned into Gotham City for a
day.  Batkid was driven around in a Batmobile, stopping the Riddler
from robbing a bank and the Penguin from kidnapping the mascot of
the San Francisco Giants.  At the end of his crime-fighting shift,
the Diminutive Detective received the key to the city.  He was got
recorded thanks from President Barrack Obama and the cast of Arrow.
Oliver, Felicity and Diggle thanked Batkid for making the criminals
of Starling City law low and allowing them to actually go out for
lunch.  I can’t even express how cool all this was.

Veteran bloggy thing readers know how little I care for how Batman
and other characters are currently portrayed by DC Comics.  Classic
characters have been turned into sadists and the essential optimism
at the core of the super-hero genre has been eroded by editors and
writers who insist on bringing super-heroes into their own twisted
dark fantasies.  But...

Look at Batkid.  Look at the joy these characters, hero and villain
alike, brought to him and all the volunteers who made his dream a
reality and all of those who witnessed the day from afar.  That’s
what DC Comics and Marvel Comics should be tapping into for their
comic books and their movies.

Posted by Tony Isabella at 4:18 AM