THE AVENGER #11: THE HAPPY KILLERS 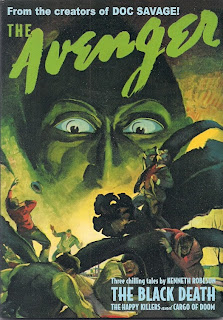 From my pal Anthony Tollin’s Sanctum Books comes The Avenger #11:
The Happy Killers, The Black Death & Cargo of Doom [$14.95]. The
novels were written by Paul Ernst and Emile Tepperman under the
Kenneth Robeson house name. Ernst wrote the novel-length stories
and Tepperman did the shorter adventure.

The Happy Killers first ran in the March 1942 issue of The Avenger.
From the back cover: A stolen formula transforms ordinary people
into superhuman murder machines.

The Black Death is from the May 1942 issue of the magazine.  Again
from the back cover: Targeted with The Black Death, The Avenger
must unmask the satanic mastermind behind the Black Wings Cult
before his own life is forfeit.

Cargo of Doom originally saw print in the May 1943 edition of Clues
Detective Stories.  From the back cover: A child makes an appeal
for help to Richard Henry Benson, leading The Avenger along the
deadly trail to a Cargo of Doom.

The historical essay by Will Murray goes beyond offering insight
and information into these stories.  In it, Murray writes how MLJ’s
Zip Comics plagiarized The Avenger’s origin story for a short-lived
character called “The Scarlet Avenger.”  MLJ would abandon most of
its adventure and super-hero features as Archie, the company’s most
famous and successful character, pretty much took over the place.
MLJ even changed its name to...Archie Comics.

As with the other Sanctum Books series - Doc Savage, The Shadow and
others - The Avenger double novels are entertaining journeys into
the heroic fiction of the pulp era.  They’re wonderfully made books
and I regularly despair I might never get around to reading all of
them.  But what I can do is let you know about the new releases as
they appear.  More Sanctum Books news is on the way.

Posted by Tony Isabella at 1:36 PM