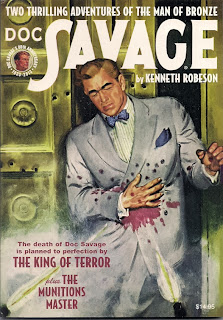 Recently published by Anthony Tollin’s Sanctum Books is Doc Savage
#69: “The Munitions Master” and “The King of Terror” [$14.95]. The
first of the two novels is written by Harold A. Davis and saw print
in the August 1938 edition of Doc Savage Magazine.  From the back
cover: With the world on the brink of global war, its leaders order
the arrest of Doc Savage when The Munitions Master frames Doc for
the “Burning death.”

“The King of Terror” was written by Davis and Dent and appeared in
the April 1943 Doc Savage Magazine.  The back cover blurb: After
narrowly escaping an assassination attempt, Doc Savage is abducted
to the South Pacific where a bizarre plot is being hatched by The
King of Terror.

Rounding out this volume is another great historical essay by Will
Murray.  Even when I don’t have time to read the Doc Savage novels,
I always read Murray’s intriguing commentaries.

As with other Sanctum Books editions - The Avenger, The Shadow and
others - these Doc Savage double novels are entertaining journeys
into the heroic fiction of the pulp era.  They’re wonderfully made
books and I regularly despair I might never get around to reading
all of them.  But what I can and will do is let you know about the
new releases as they appear.  More Sanctum Books news is on the
way.