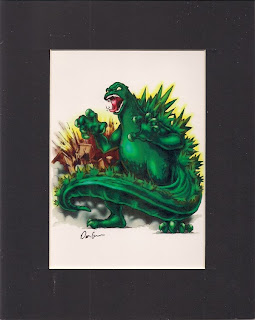 The second annual Akron Comicon took place on Saturday, November 9,
at the University of Akron’s Quaker Station.  I think it was held
in a TARDIS because it was way too big and way too much fun to be
a one-day convention.

My son Ed was my booth babe at the convention.  We sold a bunch of
books, comic books and a pair of Superman Underoos in its unopened
package.  Ed bought a Godzilla poster, a couple of volumes of Scott
Pilgrim, and a volume of a manga series.  I bought the above shown
Godzilla print by accomplished sketch card artist Daniel P. Gorman.
The blessings of the Great Scaly One be upon him.

The day was blur of good friends and terrific cosplayers.  The most
striking costume was a guy in an enormous Death outfit that had his
own music.  He came over to my table and I told him I was in good
health.  He shrugged his giant shoulders in disappointment.  I felt
bad for him so I pointed how pasty Bob Ingersoll was looking behind
his table.  With friends like me...

Among the other cosplayers was a sensational Wonder Woman with just
slightly gray hair and a great Catwoman from Batman Returns (1992).
I’m not a fan of the Michelle Pfeiffer fetish look for Selina Kyle,
but this cosplayer pulled it off.  Attorney Harvey Birdman was
also on hand; that was one of my favorite costumes.  I didn’t get
a count on how many cosplayers came to the Comicon, but my estimate
would be well over two dozen of all ages.

Mike is a close friend and a terrific writer.  In fact, every time
I see him or talk to him, I wonder to myself why he isn’t writing
a couple of ongoing titles for DC Comics, the home of many of his
greatest successes.  He’s better than 95% of the writers currently
writing for DC and he can give the other 5% a run for their money.
I shake my head in characteristic bafflement at how DC Comics makes
its editorial decisions.

Tom Batiuk, creator of the popular Funky Winkerbean and Crankshaft
newspaper strips, was also at the convention, selling and signing
The Complete Funky Winkerbean and other collections of that long-
running strip.  He’s my friend and neighbor here in Medina, Ohio,
so it’s not as if I don’t see him often, but, even so, it’s good to
see him receiving the adulation of his many fans.

Cartooning genius Craig Boldman was one of the convention guests.
Though he’s probably best known for writing a whole bunch of the
best and funniest Jughead comics of all time, Craig is one heck of
an artist as well.  We talked about comics we liked and comics we
didn’t like and I realized I need to figure out a way to team with
Craig for a project.

Ron Frenz, who has been drawing dynamic heroes since the 1980s, was
also on hand.  We only chatted briefly, but it’s always good to see
him sketching away.  He hasn’t lost an artistic step since he first
started working in the business.

I got a chance to talk with Mike Gustovich for the first time in a
couple decades.  I used to write his Justice Machine series at the
late Comico.  It was good to see Mike again.

Dirk Manning was there and he’s always a pleasure to see and talk
with.  This time around, we spoke of relative success in the comics
field.  He’s done terrific creator-owned project, but his mom was
most impressed by a work-for-hire Wizard of Oz comic book he wrote.
I’ve worked with legends like Stan Lee and Jack Kirby, but I think
what impressed my mom most was that I was friends with Jon Provost
of Lassie renown and that Sainted Wife Barb and I once took Jon and
Jay “Dennis the Menace” North to dinner.

My pal Michael May, who was a volunteer at Mid-Ohio-Con many years
ago, was also a volunteer at the Akron Comicon.  He told me about
the newest addition to his household: a pet skunk.  In fact, it was
his second pet skunk.  He then proceed to astound even more when he
told me he got the skunk from a skunk shelter.  Which is, believe
it or not, a real thing.

The shelter Michael described cares for well over a hundred skunks
with most - but not all - of them being descented.  In all the time
this shelter has been open, even when its still scented residents
would have their little spats, no skunk has ever released its toxic
spray.  The whole idea of a skunk shelter fascinates me.  I might
have to check it out in person.

Getting back to the guests...

Brad Ricca was at the convention.  He’s the author of Super Boys:
The Amazing Adventures of Jerry Siegel and Joe Shuster--the
Creators of Superman [St. Martin's Press; $27.99], the best comics
biography ever written.  I reviewed this book in my “Tony’s Tips”
column at Tales of Wonder and recommended it to every comics buff
I know.  It was pleasure to finally meet the man who told Jerry and
Joe’s story better than anyone ever has.

Other old friends at the Comicon: Mark Pengryn, Mike Sangiacomo,
Gerry Shamray, Ted Sikora, Marc Sumerak, a furry ball of love known
as Chris Yambar and the insanely multi-talented Thom Zahler.  These
pals and the other great folks at the event made the Akron Comicon
a very special day for me.

The Akron Comicon is becoming a highlight of my convention travels.
Promoters Robert Jenkins and Michael Savene have learned a lot from
the many conventions they’ve attended and they are applying those
lessons to their own event.  Their biggest problem is how fast this
amazing convention is growing.

My prediction is that the Akron Comicon will keep having to move to
bigger venues as it continues to grow.  I can easily see the show
becoming a two-day event.  Finally, within five more years, I could
see this show being considered the real successor to Roger Price’s
Mid-Ohio-Con.  I’m looking forward to that time.

The next Akron Comicon will be on Saturday, November 8, 2014.  I’m
not sure where it will be held, but I’m already marking that date
on my schedule.  I’ll be there and, if you want to spend a fun day
with other comics fanatics, you should be there, too.