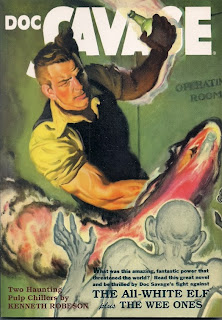 Here’s another new book from Anthony Tollin’s Sanctum Books.  Under
the Kenneth Robeson byline, Lester Dent wrote both the Doc Savage
adventures reprinted in Doc Savage #70: The All-White Elf and The
Wee Ones [$14.95].  From the back cover:

Reports of a strange miniaturized woman set Doc on the trail of The
Wee Ones.

Besides the usual great historical essay by Will Murray, the volume
also features an eight-page comic-book story of Cap Fury from the
short-lived pulp magazine The Skipper.  The comic story was adapted
by Jon L. Blummer, an early artist on the Long Ranger comic strip
and the creator of Hop Harrigan.  The story comes from Doc Savage
Comics #5 (1941).

As with other Sanctum Books editions - The Avenger, The Shadow and
others - these Doc Savage double novels are entertaining journeys
into the heroic fiction of the pulp era.  They’re wonderfully made
books and I regularly despair I might never get around to reading
all of them.  But what I can and will do is let you know about the
new releases as they appear.  More Sanctum Books news is on the
way.

Posted by Tony Isabella at 3:03 PM