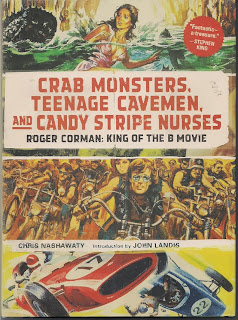 For B Movie fans, if Roger Corman didn’t exist, we would have had
to invent him.  While there were plenty of B movies before Corman
started making them and there are plenty of B movies made without
the Corman touch, he is and remains B Movie royalty.  Which makes
Chris Nashaway’s terrific Crab Monsters, Teenage Caveman and Candy
Stripe Nurses: Roger Corman: King of the B Movie [Harry N. Abrams;
$35] must-reading for devotees of the famed independent producer,
director and writer.

My admiration for Corman stems from my love of the monster movies
that would air on Cleveland television in my youth.  I could list
a dozen-such thrillers but I’ll go with the one that resonated with
me more than most: Attack of the Crab Monsters.  I loved that movie
so much that, when Corman briefly became involved with comic-book
publishing, I pitched an ongoing Attack of the Crab Monsters series
to his editor.  The pitch didn’t sell, but, when it turns up in my
Vast Accumulation of Stuff, I’ll take another whack at it.  Think
Isabella channeling Steve Gerber and Gerry Trudeau with giant crab
monsters.  I might have been ahead of my time.

Nashaway’s book unlocks the keys to the Corman kingdom.  It’s a big
book - not quite coffee table - filled with stunning movie posters
and stills.  It covers Corman’s career in great detail and places
a well-deserved emphasis on all the movie-making legends who acted
in Corman movies and whose association with Corman moved them into
greater triumphs.  Corman certainly deserves the many tributes paid
to him over the years.

Though I may not be the average reader of Crab Monsters, I think it
would be difficult for almost any reader to make their way through
this tome without making a list of the Corman movies they want to
see or see again.  Even as I write this review, I am jones-ing big
time for another Attack of the Crab Monsters viewing...and that’s
just one of over a dozen Corman productions on my list.

I recommend this book for Corman and B Movie buffs, for students of
modern movie-making and as a gift for anyone you know who is in any
of those groups.  It’s a treasure.

Moving on to some movie reviews with the warning there will almost
certainly be spoilers ahead...

The long-delayed Stonados (2013) finally aired on the Syfy Channel
last weekend and talk about your ill wind.  I spent the rest of the
weekend apologizing to my Sainted Wife Barbara because I talked her
into watching it with me.  She won’t admit it, but she got a kick
out of Sharknado.  But, that classic aside, I should have known she
wouldn’t enjoy this movie.

Here’s the bare bones plot. Tornados full of rocks attack Boston.
Our heroes are a scientist turned school teacher mourning his late
wife, his kids, his cop sister and his friend scientist turned TV
weatherman.  Also in the cast is the Cigarette Smoking Man from The
X-Files and several other characters you know are doomed to die as
soon as they show up in the movie.

Paul Johansson is okay as the school teacher scientist, manfully
struggling against the awful script.  Sebastian Spence is quite fun
as his friend.  Miranda Frigon, who was wonderful in the less than
wonderful Primeval spin-off, is pretty good, too.  The CSM is okay
in a kind of doomed to die sort of way.  And would it have been so
awful to drop rocks on the children?  I don’t think so.

Barb was amazed at my uncanny knack for pointing out who
was doomed to die in Stonados.  I’ll take it.

Stonados started out promising.  After watching the doomed to die
tour guide die, I thought the Plymouth Rock thing - it gets sucked
out of the ground and dropped on a basketball player several miles
away - might play a bigger part in the movie.  It didn’t.  Too bad.

If the stonados had been the revenge of the indigenous people who
were cheated, brutalized and slaughtered by the Pilgrims and other
Europeans, the way the stone-flinging storms acted would have made
more sense.  As it was, the stones dropped however the movie wanted
them to drop regardless of physics.  A nasty fortune teller at the
Boston harbor gets smashed into a wall by a boulder that comes in
sideways and at ground level.  Lame.

I’m not expecting works of art from Syfy original movies.  But the
network can and should do better than this.

Robocroc (2013) aired on Syfy in September.  The basic plot wasn’t
awful.  Experimental government nanites land in an aquatic park and
make a large crocodile their bitch, slowly transforming the beast
into a robot crocodile that still has the killer instincts of its
original self.  The military swoops in to take command and manage
to make things even worse, at least partially because the scientist
in charge of the projects is murderously insane.

Corin Nemac delivers his usual fine performance as the movie’s and
the park’s resident croc expert.  Nemac was born to star in these
movies.  Dee Wallace is entertainingly over the top as a government
scientist determined to see out how many civilians and soldiers the
more robot than natural croc can eat...though it doesn’t really eat
any one because of the whole now-a-robot thing.

Pretty much everyone else in the cast, whether they die or not, is
there to be chomped on by the monster and perish in scenes that are
surprisingly bloodless and gore-less.  The only real suspense here
is waiting for Wallace to get hers.

Robocroc drags.  It’s not a terrible movie, but it’s not very good
either.  It’s not a keeper and not worth a second viewing.  Sadly,
it’s only worth a first viewing for Nemac and Wallace.

I don’t think I’ve become more demanding of Syfy original movies.
I think the network is coasting.  It needs to serve its viewers a
tastier cheese.

Posted by Tony Isabella at 1:34 AM