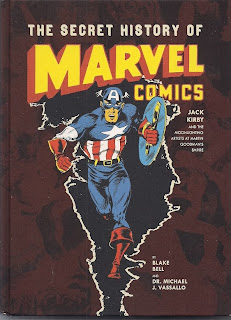 This year has been filled with amazing comics biographies and other
books of comics history.  You can add The Secret History of Marvel
Comics: Jack Kirby and the Moonlighting Artists at Martin Goodman's
Empire by Blake Bell and Dr. Michael J. Vassallo [Fantagraphics;
$39.99] to that non-fiction bounty.

Before and during his comics publishing career, Goodman maintained
a mostly robust line of magazines and other periodicals.  Bell and
Vassallo explore the “other” Goodman and draw links to the comics
for which the publisher would be best known.  This is a fascinating
story, but not an unusual one.

Goodman, like most of his competitors in the first wave of American
comic-book publishing, was not an ethical businessman.  He grew up
in a tough time in our history and didn’t hesitate to cut corners
to make a buck.  Only on rare occasions did he show any regard and
respect for the creators who filled his magazines and comic books
with material.  It can be said Bell and Vassallo judge Goodman in
their book, but they do this by providing hard facts, remembrances
from Goodman associates and employees and well-reasoned conjecture.
Indeed, the only place in this book where they allow their opinions
to wrongly steer their conclusions is when they discuss the current
Marvel Comics publishing program with facts not in evidence.  There
and only there do they stray from being the diligent researchers of
the rest of this wondrous tome.

If Secret History were merely an indictment of Martin Goodman, it
would have value as a comics history.  Bell and Vassallo provide so
much more.  Their examination of Goodman’s publications, how those
publications were produced, their comparisons to what was going on
elsewhere in the pulp field and the many ties between the pulps and
comic books enrich our knowledge of the company that would become
Marvel Comics.

In addition to the history itself, the authors provide hundreds of
pulp covers, interior illustrations and photographs of key players
of their narrative. They include over two dozen artist profiles of
comics creators who also contributed to Goodman’s magazines.  The
book is literally packed with information and, at that, surprising
information.

In any other year, The Secret History of Marvel Comics would be a
shoo-in to win the big comics industry awards.  This year, it must
compete with several other equally find books.  But it is a serious
contender and, win or lose, it’s a book that belongs in the library
of anyone passionate about comics history.

Comics legend Roy Thomas celebrated his mumble mumble birthday last
week.  Discounting a couple of small and small-paying earlier gigs,
my career in comics began when Roy hired me to assist Stan Lee and
Sol Brodsky in putting together weekly reprints of Marvel material
for Great Britain.  Not only was I working in comics - which was a
huge deal in 1972 - I was learning from three of the smartest guys
in the business in Roy, Sol and Stan.

As I usually do on Roy’s special day, I sent him an e-mail thanking
him for hiring me, for his decades of friendship since and for all
I learned from him.  Modestly, Roy usually tells me I didn’t have
that much to learn and that my success came from my own talent and
hard work.

Sometimes, Roy mentions that one of the few things I had to learn
was not to criticize Planet of the Apes in a magazine licensed from
and devoted to Planet of the Apes.  He is being too kind.  I did a
great many things dumber than that during my few years working in
the Marvel offices.

Respectfully, Roy is wrong about how much I learned from him, but
he may not realize why he’s wrong.  I’m not sure I ever explained
it to him as I’m about to explain it to you.

Before I ever stepped foot in the Marvel offices, I studied comics
writers who I felt had much to teach me.  I studied Stan Lee, Roy
Thomas, Jack Kirby, Steve Englehart, Len Wein and Robert Kanigher.
I learned how to construct a story so that a new reader could get
swept up into it and follow it without necessarily having read all
the previous issues of a title.  I learned how to bring the power
to a sequence when it needed it.  I learned how to choose words to
give my scripts a more lyrical quality than what was the norm for
the industry.  I learned to be fearless when it came to portraying
real emotion in my work.  How well I succeeded in any of the above
is up to readers to determine, but it was from these writers that
I learned and from which my own style developed.

If you’re wondering about my other influences, both before I went
to work in comics and since I’ve been working in comics, that list
is slightly longer.  Shakespeare, O. Henry, Harlan Ellison, Lester
Dent, Neil Simon, Ed McBain, Dave Barry, Max Allan Collins.  There
are a few others, but those are the main ones.

When I think about my influences, I wonder who is influencing the
current comics writers and the comics writers of the future.  I’m
not coming up with a lot of names.  Mark Waid and Kurt Busiek are
among the few current comics writers who have mastered the various
arts mentioned above.  I can see learning things from Alan Moore,
Neil Gaiman and Harvey Pekar.

Overall, though, a lot of what I read in modern mainstream comics
strikes me as cribbed from movie and TV writing.  I see an ongoing
failure to make it easy for a new reader to get into long-running
series and even some creator-owned series.  Forgotten is the idea
that every comic book is some reader’s first issue of that series.
It’s as if writers seem to expect the reader to know the characters
and situations as well as they do.

I see enormous body counts and destruction taking the place of real
drama and emotion.  I read dialogue that doesn’t reflect who these
characters are.  I see company-wide, shock-driven “epics” instead
of real and meaningful stories.  It’s comics as blockbuster movies
and violent video games.

It’s not my intention to belittle all of the current comics writers
and attribute the same failings to all of them.  If you have been
reading my bloggy things and review columns, you know I find great
merit in many modern comic books.  But I’d be less than honest if
I didn’t express my belief that the art and craft of comics writing
isn’t as developed as it should be...or as skilled as it must be.