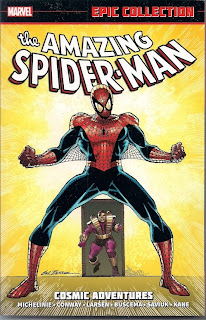 Marvel Comics sent me a copy of Amazing Spider-Man Epic Collection:
Cosmic Adventures [$39.99] on account of the full color, just-over-
500-pages volume reprints four of my stories.  This is one of the
things I love about Marvel.  When the company reprints my work, it
sends me a copy of the reprint.  If the reprint sells well enough
to earn royalties, the company sends me a check.  Not only have I
never had to chase Marvel for my money, but, on several occasions,
the first time I’ve learned of the reprint is when I get the book
or the check.

Contrast that with DC Comics.  Its policy is...if a creator catches
them doing something they owe the creator money for, the creator
has to fill out paperwork and maybe, if DC happens to be feeling
like not being a dick that day, then maybe DC will pay the creator
at one of the two times a year the company deigns to send out such
checks.  How super of them.

The Marvel checks? They get sent more than twice a year.  Indeed,
as near as I can determine, Marvel writes the checks whenever they
have money for creators.

I wasn’t aware of Marvel’s Epic Collections series until I received
Cosmic Adventures.  From the inside front cover:

The Epic Collections feature the best characters and stories from
Marvel’s vast history.  Volumes are not published in chronological
order - so start your collection today with this edition.

Cosmic Adventures is Volume 20 in the series.  The “cosmic” comes
from a story arc in which Spider-Man was given the power of Captain
Universe.  Other Spider-Man stories in this volume feature Venom,
the Punisher, Psycho-Man and more.  The reprints come from Amazing
Spider-Man #326-333 and Annual #24, Spectacular Spider-Man #158-160
and Annual #10 and Web of Spider-Man #59-61 and Annual #6.  Those
annuals are why I got a copy of this book, but I’ll get to that in
another paragraph or so.

My stories? In 1990, Salicrup asked me to write four short stories
for the Spider-Man annuals.  “Amazing Fantasy” was a five-page Ant-
Man tale with art by Steve Ditko.  It appeared in Amazing Spider-
Man Annual #24.  Veteran bloggy thing readers will recall I posted
my original plot and script pages for the tale - as well as Ditko’s
pencils - in September of 2011.

I had two stories in Spectacular Spider-Man Annual #10.  The first
was a 12-page Sandman story continuing from the Sandman story that
ran in the Amazing Spider-Man Annual.  Penciled by Ross Andru and
Alan Kupperberg with inks by Mike Esposito, the story starred the
then-reformed Flint Marko being put on the spot by former teammates
the Wizard and the Trapster.

The second story was the first of four Rocket Racer stories I wrote
for Marvel in 1990 and 1991.  “What I Need on My Summer Vacation”
was penciled and inked by Kupperberg.  In this 10-page story, the
Racer, then in the employ of Silver Sable, is sent to my own Medina
County to recover stolen tech from the Pack Rats, scientifically-
inclined rednecks on a secret mission of their own.  I had fun with
the Racer, but I never topped the scene where he goes fishing with
Sheriff Andy Taylor. Really.

Medina was also the setting for “Child Star” in Web of Spider-Man
Annual #6.  In this seven-page story, a toddler receives the powers of
Captain Universe to save the world from demons.  Steve Ditko drew
the story and the toddler was based on my own son Eddie.  I think
this story has been reprinted more than any other story I’ve ever
written...with the possible exception of the Tigra origin story in
Giant-Size Creatures #1.

It’s been years since I’ve read the stories in Cosmic Adventures,
but I’m looking forward to rereading them soon...and not just the
ones I wrote.  I think you might enjoy them as well.

Mark Waid’s run on Daredevil is coming to an end and this makes me
sad.  I read issues #27-31 [$2.99 each] this week and that made me
even sadder.  This run is among the very best Daredevil runs in the
character’s half-century of publication.

In these five issues, we saw the conclusion of Daredevil’s battle
with the mysterious villain who has been plaguing him for much of
Waid’s run.  We saw Foggy Nelson battling cancer and it was so real
it hurt.  We saw the return of the Sons of the Serpent at the very
time when the excesses of the right are giving racists license to
express their abhorrent views.  And we got a one-issue team up with
the Silver Surfer.  Yeah. Silver Surfer.  And Waid actually made it
work.  The man must be juicing with some sort of writer steroids or
something.  He knocks it out of the park time after time.

What else do I like about Daredevil? Beautiful art and storytelling
by artists Chris Samnee and Javier Rodriguez.  The mix of dark and
light in Matt Murdock.  Maybe the best recap pages in all of Marvel
Comics with its clever use of Daily Bugle front pages.

How good is Daredevil? When Marvel publishes one of those big-ass
omnibuses collecting the entire Waid run, I’m gonna buy that book
even if I have to go back to pole-dancing at bachelorette parties.
I just hope my spine holds out.

Daredevil is that good.

I’ll be back on Tuesday with more stuff.

Posted by Tony Isabella at 1:26 AM