HER BOSS IS A VAMPIRE 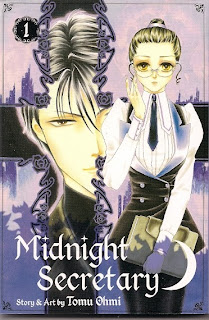 Midnight Secretary [Viz Media; $9.99 per volume] is a seven-volume
shojo series by Tomu Ohmi.  Originally published in the Petit Comic
magazine from August 8, 2006 to May 8, 2009, the manga is about the
relationship between executive secretary Kaya Satozuka and her boss
Kyouhei Touma.

Kaya is beautiful with something of a baby face.  She dresses in a
severe manner so she will be taken seriously.  Kyouhei is a jerk.
He disdains most humans, which is something of a problem since his
father is a human.  Vampires cannot have children with vampires and
the children of human/vampire pairings produce offspring who are
one or the other.  Kyouhei’s brother, likewise an executive at the
family corporation, is a human.

Kaya is a compelling protagonist.  She accepts the job as Kyouhei’s
secretary even though he has a reputation for being an impossible
boss.  She does this to protect her mother’s job and because she’s
determined to the best secretary at the company.  This isn’t some
wild hope on her part.  She really is excellent at what she does,
which, once she finds out what her boss is, includes scheduling
“dates” with the women he feeds off of.

Kyouhei doesn’t kill his meals.  He brings them exquisite pleasure
and this makes their blood more satisfying to him.  But, when his
exposure to sunlight makes him dangerously weak, Kaya freely offers
him her own blood.  Thus begins a relationship that, though each of
them tries to keep the other at a distance, becomes closer and more
romantic in nature.  Of course, as of the second volume, Kyouhei is
still an enormous jerk.  At least he has five more volumes in which
he can improve his rotten personality.

Ohmi is a fine storyteller.  She lets readers know what they need
to know to follow these characters and understand the nature of the
vampire in the world of this series.  She draws gorgeous women who
are honestly sexy.  So sexy that the series is quite rightly rated
“M” for mature readers.

Manga and especially shojo manga isn’t for everyone.  But if you’ve
an interest in this type of story, I recommend you give it a try.

Random musing.  I don’t attention to online chatter about DC’s “New
52" stuff because those comics mostly suck.  I’m something like a
year behind in reading issues loaned to me by a pal, so I haven’t
reached the “Year Zero” issues of the Batman titles.  Which brings
me to this...

Is there really some indication in these comics that Dick Grayson
was not the first Robin?  I’m still unclear on whether or not Tim
Drake was ever Robin in this awful new continuity or if Stephanie
Brown ever existed.  But to have someone other than Dick Grayson be
the first Robin just seems terribly wrong to me.

Another random musing.  So I’m reading the excellent The Secret
History of Marvel Comics: Jack Kirby and the Moonlighting Artists
at Martin Goodman's Empire by my pals Blake Bell and Dr. Michael J.
Vassallo [Fantagraphics; $39.99], which I’ll be reviewing at length
in the near future.  While reading, I suddenly find myself totally
fascinated by and curious about Snafu, a magazine-size imitation of
MAD Magazine.

Three issues of Snafu were published in 1955 and 1956.  Edited and
mostly - if not entirely - written by Stan Lee, each issue was 68
pages counting covers.  Artists known to have contributed to Snafu
include such legendary talents as Joe Maneely, John Severin, Russ
Heath, Howie Post, Bill Everett and Marie Severin.  Naturally, I’d
like to read and own these issues.

So let’s add The Complete Snafu to my list of books I really wish
existed so that I could buy them.  Reprinting the three issues from
cover to cover would run 204 pages, a respectable page count for a
hardcover collection or trade paperback.  Come on, Marvel Comics,
I don’t ask you for much.

I let an important anniversary pass without comment because I had
already written my blog for that day.  I want to acknowledge that
anniversary today.

Friday, November 22, was the 50th anniversary of the assassination
of President John F. Kennedy.  He was the first president of whom
I was profoundly aware because, like my family - and myself at the
time - he was a Roman Catholic.  That was a huge deal for my family
and the Sts. Philip and James parish of which we were members.

A common right-wing paranoid fantasy of the time was that Kennedy
would be taking orders from the Pope.  Things have changed little
in that regard.  The right wing always goes to the crazy fantasies
to attack any President who’s even a little bit different from the
standard white Protestant model.  Sigh.

I remember the announcement coming over the public address system
at my school.  It was maybe the only time I ever saw the nuns who
were our teachers cry or visibly express sorrow.  So, in addition
to trying to process the unthinkable, we had to process the sight
of those scary black-clad women being human.

We were sent home early, no big deal in those days when most kids
had a stay-at-home mom.  My dad got home a little bit earlier, but
that wasn’t unusual.  His work day ended by four in the afternoon
or so because it started at four in the morning.

I have no memory of what we had for dinner.  We didn’t have a wide
menu and, in retrospect, I think my mother made the same meals on
pretty much the same days of the week.  Mom and Dad would have sat
on either end of the table, my older sister and I on the side that
was in front of the window that looked out on our back yard, my two
younger brothers across from us.

We didn’t talk a lot at dinner.  Mostly it was the kids telling our
parents what happened at school or what homework or projects that
we had to do.  My father might tell my mother something about the
folks from our old neighborhood.  If we spoke at dinner at all that
evening, it was less than our usual conversation.

None of our regular TV programs were on.  Both of my parents were
in the living room watching the news reports.  I did my homework in
the living room, but I’m not sure any of my siblings were there on
that night.  My sister tended to stay in her own room, my brothers
might have been in the upstairs room we shared.

If I didn’t need a desk, I did my homework while sitting in a very
comfortable rocking chair.  I did what little homework I had - our
teacher hadn’t given us much - and I maybe worked ahead in my math
workbook.  If my teachers didn’t keep an eye on me, I would finish
the workbooks months ahead of the class.  Grade school was not very
challenging for me.

I do remember the comic book I read a couple times while my parents
watched TV.  It was Adventure Comics #314 [November 1963], which I
think I got in a trade with a neighborhood kid and not by buying it
at the drug store.

In a story I now know was written by Edmond Hamilton and drawn by
John Forte, the Legion of Super-Heroes battled “The Super-Villains
of All Ages!”  A rejected Legion applicant steals one of their time
machines and brings Nero, Dillinger, and Hitler to the future era
of the Legion.  He puts their minds into the bodies of Superboy,
Mon-El and Ultra-Boy.  Saturn Girl pushes the treacherous trio into
turning on each other.  I barely remember the Superboy solo story
that followed the Legion adventure.

I do remember not liking the story much, which might be why I read
it more than once that night.  With the TV reports about Kennedy’s
killing filling the room, comic-book villains, even villains based
on real-life villains, didn’t seem remotely real to me.  Though I
tried, I was unable to lose myself in my comic book.

I don’t have any particular deep thoughts on the anniversary.  It
has been called the day America lost its innocence, but fifty years
of life and study since then has convinced me we never really had
such blessed innocence, that we were simply better at covering up
the bad things of our country and our world.

Fifty years of conspiracy theories have not convinced me that Lee
Harvey Oswald was part of any organized plot against the country.
Fifty years of watching politicians, corporations and organizations
in action have not allowed me to rule out that there was some sort
of conspiracy.  Fifty years have convinced me that some people will
believe anything, no matter how outlandish, rather than accept the
most simple, obvious and proven truths.

But Kennedy was the first President I could truly call my own and
I say that holding nothing against President Dwight D. Eisenhower.
I liked Presidents Jimmy Carter and Bill Clinton, but I never felt
that connected to them either.  I could manage extreme dislike for
Richard Nixon, Ronald Reagan, and the second Bush and very little
emotion of any kind for Gerald Ford or the first Bush.  I can call
Barack Obama my own, but it’s a respect tinged with the now usual
disappointment I feel towards most politicians and public figures,
even the ones I vote for.

Did I lose my innocence or did I just get older?

Posted by Tony Isabella at 5:40 AM