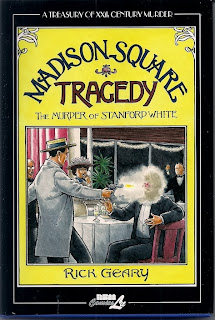 I have a friend who loves comic books up to the point of actually
reading them.  He goes to all the super-hero movies and likes the
Marvel ones better than the DC ones.  He thinks Stan “The Man” Lee
is way cool, which may be the basis of our friendship.  He likes
knowing someone who knows and has worked with Stan.

He sometimes asks me if I’ve read any good comics lately.  Not that
he’s likely to read those comics.  Most recently, my answer to the
question was: “The new Rick Geary book was fun.”  Naturally, he had
no idea what I was walking about.

I tried to explain.  I told him Geary does these fun little graphic
novels about 20th century murders.  He had a tough time with “fun”
and “murder” being in the same sentence.  When I tried to explain
that Geary’s book were charming and informative and even sweet in
their own demented way, I suspect he was mentally practicing what
he would say to the reporters if it was ever discovered that I was
a serial killer.  Which I’m not.  Honest.

Madison Square Tragedy [NBM; $15.99] is Geary’s latest sweet little
murder book.  Its sordid subject is the murder of famous architect
Stanford White in June of 1906.  White designed the mansions of the
New York rich and the first Madison Square Gardens.  He was also a
sadistic sexual predator who beat his “conquests” and delighted in
luring innocent young women into his boudoir.  His killer - Harry
K. Thaw - wasn’t much better.  The women in their lives were easily
dominated and made incredibly bad decisions.  And therein lies the
weaving of multiple stories that led to White’s far-from-untimely
demise and Thaw’s downfall.

Geary combines nigh-obsessive research with charming drawings and
solid storytelling.  He captures the feel of the era and eases the
reader into the depravities.  The good old days were never quite as
good as some would claim them to be and Geary’s work reveals that
obvious truth in brilliant fashion.  His reporting of these bloody
events is more polite than sensational, which makes the books all
the more shocking.  I love them madly and I recommend them to both
comics fans and general true crime afficionados.

Dark Horse has published over a hundred Conan comic books and that
doesn’t include its reprints of near every Conan comic published by
Marvel.  I’ve been reading and mostly not reviewing the DH Conans,
but, every now and then, I come across issues that are even better
than the DH’s usual high standards for these comics.

Conan #28 [May, 2006] features “Storyteller” by writer Kurt Busiek
and artist Eric Powell.  It’s a lovely done-in-one story in which
Conan himself is but a supporting character.  It’s tale of a young
man, prone to telling stories, who rises to a challenge as bravely
as any hero.  It’s a remarkable issue.  If there were actual “Best
of the Year” anthologies that included mainstream comics among the
darlings of the artsy-fartsy crowd, this story would have been in
the 2006 volume.

Also exceptional was P. Craig Russell’s three-issue Conan and the
Jewels of Gwahlur from 2005.  It’s adapted from a Robert E. Howard
story that I’ve never much cared for - Conan comes off as a sleazy
con man - but Russell’s version is a stunning display of intriguing
storytelling and magnificent art.  Kudos also go to colorist Lovern
Kindzierski and letterer Galen Showman.  These are very cool comic
books and well worth seeking out.

A+X [Marvel; $3.99] is a wonderful anthology series that features
two stories per issue.  Each story teams up an one of the Avengers
with one of the X-Man.  The introductory page is always hilarious.
The stories are so well-crafted that you don’t need to know all the
recent Marvel continuity.  I love this title, so, naturally, it’s
being cancelled.

Do not let the cancellation prevent you from seeking out A+X #12.
In the lead story, Christos Gage reunites old pals Wonder Man and
the Beast, both of whom have made incredibly terrible decisions of
late.  Those decisions are covered in a panel or two as we follow
the two heroes from tavern to tavern trying to rekindle their old
friendship.  Despite the duo’s decisions, Cage keeps the story fun
and downright hilarious.  Artist David Williams does an excellent
job on his end.  The result is the rare super-hero story that will
leave you feeling happy.

The same is true of the Captain America/Jubilee team-up by Justin
Jordan and Angel Unzueta.  In case you missed it, Jubilee is now a
vampire.  But a good vampire.  So who better to team with Cap to go
after...wait for it...underwater vampire Nazis from World War II?
Another feel-good story.

Unseemly as it is for a man of my dignified years to beg, I would
urge Marvel to reconsider canceling A+X.  If they can’t do that, I
would ask that they launch a new anthology with the same fun vibe.
Because we need this kind of super-hero comic book.

The bloggy thing will be taking a couple days off while I prepare
for and attend this year’s Akron Comicon.  The event takes place on
Saturday, November 9, 10 am to 6 pm at the University of Akron’s
Quaker Station (135 S. Broadway Street).  The convention has a way
cool guest list and I hope to see some of you there.