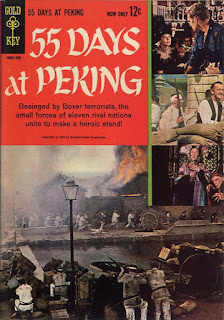 ﻿Let’s call July 1963 the month of my awakening.  It was the month
when Fantastic Four Annual #1 changed my life and made me want to
make comic books for a living.  For the next several days, I’ll be
writing about comics from that month.

Dell’s 55 Days at Peking [September 1963] was an adaptation of that
year’s historical drama starring Charlton Heston, Ava Gardner and
David Niven.  The movie is set in China during the Boxer Rebellion,
specifically the Battle of Peking [August 14-15, 1900] with foreign
diplomats under siege in their compound.

The 32-page adaptation was written by Paul Newman with art by Mike
Sekowsky (pencils) and Mike Peppe (inks).  Sekowsky and Peppe also
drew a one-page fact filler on the Boxer Rebellion.  This sort of
comic book, adapting a movie I would have had no interest in seeing
at my then-age of 11, wouldn’t have even registered on my comics-
buying radar.  I would have quickly passed it over in favor of one
of DC’s Superman or Batman titles or even DC’s Jerry Lewis or
Dobie Gillis comics.

Look for more comics from the month of my awakening over the next
several days of this here bloggy thing.

Speaking of being under siege, I’ve fallen behind in my mission of
getting caught up with the X-Men this month.  I’m currently reading
X-titles dated August of last year...and enjoying them more than I
had anticipated.

The X-Men living on Utopia and maintaining close ties with nearby
San Francisco is a plot element that continues to work for me.  It
may not make tactical sense for most of Earth’s remaining mutants
to be living in one place, but it’s nice to see our often maligned
mutants getting some love from non-mutants.

X-Events keep popping up like crabgrass.  Curse of the Mutants was
tedious with the only saving grace being Cyclops coming up with an
absolutely diabolical plan to take down the invading vampires.  If
Marvel can keep Scott Summers balanced and not allow him to stray
too much back into the dark side, he can continue to emerge as one
of the Marvel Universe’s most effective leaders.  That’s a terrific
journey for the character.

Alternate X-realities keep popping up like super-crabgrass.  In Age
of X, Legion, who has multiple personalities, can reshape reality,
and is the son of Charles Xavier, creates a new reality via one of
his personalities.  The X-Men and other inhabitants of Utopia live
lifetimes in a mere seven days.  The actual Age of X storyline was
so-so at best, but the aftermath, with many mutants retaining their
memories of the other reality and struggling to deal with them, has
been fairly interesting.  But can we cool it with alternate realities
for a few years?

Based on my reading its first eight issues, Generation Hope is the
weirdest of the X-titles.  Hope is the first mutant birth since M-
Day - “No More Mutants” - and was raised in the future by Cable.
Now that she’s back in our time, other young mutants have started
to appear.  She gathers five of these - The Five Lights - and forms
a team to find other new mutants and help them control their power.
Hope’s Lights includes a feral boy who operates on instinct and a
young artist with a power that defies easy description.  Then they
fought an unborn child.

Writer Kieron Gillen is really bringing it to Generation Hope.  All
the other X-writers will have to up their game to stay in the race
with him.

I love Namor’s alliance with the X-Men.  He’s a good fit with them
and they with him.  I think New Atlantis being Utopia’s neighbor is
brilliant.  What I didn’t love was Namor the First Mutant, a title
that lasted around a dozen issues.

Namor the First Mutant was hampered from the get-go because it spun
off from Curse of the Mutants, an X-event that went on too long and
had too many epilogues.  Then we got an equally tedious story arc
of Namor in Hell.  It wasn’t as tedious as that Wolverine in Hell
story arc in Wolverine, but it was pretty awful.  I’m not surprised
Namor didn’t find an audience this time around.  I hope Marvel will
give him another chance soon.

Speaking of Wolverine, his current series is like the patron saint
of tedium.  Here’s the one plot the title has:

The X-Men’s enormous cast of characters lends itself particularly
well to anthology titles.  In 2010, we got Nation X (four issues)
and, in 2011, X-Men: To Serve and Protect (four issues).  While not
every story in every issue was a hit with me, there were sufficient
good stories for me to recommend these two titles to you.  Both are
available in trade paperback collections.