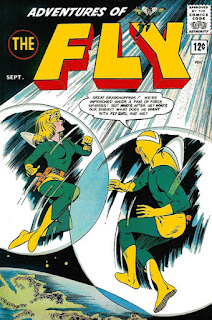 ﻿I’ve been telling you repeatedly that Fantastic Four Annual #1 came
out in July 1963 and changed my life.  What I haven’t mentioned is
that my interest in comic books was winding down at that time.  Of
the 137 comics listed by Mike’s Amazing World of Comics as coming
out that month, I only owned 22 of them.  Of those 22, I bought or
traded for 12 of them as back issues...and only bought ten of them
off the newsstands.

I’ve never owned or read The Adventures of the Fly #27 [September
1963].  I’d gotten the occasional issue of that title or the Jaguar
in trades, but they were always add-ons to sweeten deals.  I would
not buy Archie super-heroes with any regularity until they started
doing their Marvel imitation.  I didn’t consider them as rip-offs
but comedies, the same reaction I had to the Batman TV show.  I was
able to enjoy them on that basis.

John Rosenberger drew the cover and the 20-page, two-chapter cover
story: “The Great Z-17 Mystery” and “The Menace Of The Invisible
Planet!”  All the issue’s stories were written by Robert Bernstein,
best known for his Superman writing, though he also wrote a handful
of stories for Stan Lee around this time.

I’ve got two more comics from July 1963 coming up for Thursday and
Friday, then I’ll switch back to December 1951 for a bit.

Yesterday’s bloggy thing had me waxing nostalgic about some stuff
and then updating you on some other stuff.  I’m walking that same
bloggy path today.

This year has been the slowest of my professional career, at least
when it comes to paying gigs.  However, I did recently complete a
trio of assignments for a client and he was incredibly pleased with
my work.  It’s not that I can’t still do good work.  It’s just that
I don’t get many opportunities.

My stating the above fact will delight some people.  Many of them
will be people who have never created or written anything of worth
in their entire lives.  Many of them will be miserable sods without
the great wife and kids and friends and life I have even when I’m
not getting paid big or small bucks for writing.  It’s hard for me
to care what they think or say about me, though I confess it does
please me to know I have it so much better than them.

A couple friends/readers seem to think I won’t accept work-for-hire
jobs.  That’s simply not the case.  I’m open to almost anything as
long as its work I think I can do well...that pays a decent wage or
has other benefits to make up for low pay...that doesn’t violate my
moral code.  I do believe I can do my best work when the editor’s
hand is the lightest.

I’m not even against entering into creative partnerships.  Heck, if
DC had honored its partnership with me, Black Lightning would have
been just the first character I created in that partnership.  That
partnership agreement was a good and fair one for both the company
and myself.  It wasn’t me who trashed it.

One way or another, I will get back to comic-book writing.  There
are two speculative projects on my desk that I’ll be getting back
to next month...in between my son’s graduation from Ohio State and
my garage sales.  After that, I’ll look at whatever opportunities
have been offered to me and, if there aren’t any, I’ll explore the
opportunities I can make for myself.

That’s all the self-promotion I can take for a while, so this will
be a short bloggy thing...much like myself.  Come back tomorrow for
another Rawhide Kid Wednesday.