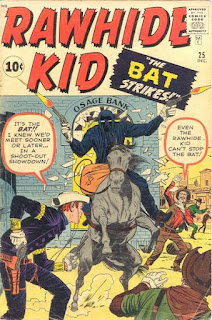 Three issues ago, the Rawhide Kid battled a monstrous living totem.
In The Rawhide Kid #25 [December 1961], he faces his first not-so-
super-villain.  Alas, though the Bat looks mighty impressive on the
Jack Kirby/Dick Ayers cover, he doesn’t come close to living up to
that first impression.

Written by Stan Lee with art by Kirby/Ayers, “The Bat Strikes!” is
a poor forerunner of the many terrific super-villains Lee and Kirby
would create to oppose the Fantastic Four, Spider-Man, and the rest
of Marvel’s soon-to-come heroic pantheon.  At seven pages, this tale is
the weakest of the issue’s three Rawhide Kid adventures.

It starts out promising enough.  The Kid comes to town to deposit
money in a bank, but is shunned by the townspeople.  They suspect
him of being the Bat, a notorious masked bank robber.  Seth Wilson,
a big man in the town, tries to push the Kid out of town, only to
have the Kid knock him down in a four-panel fight.

When Rawhide tracks down the town banker, the banker won’t accept
money from a man with the Kid’s reputation. Wilson shows up again;
he’s engaged to the banker’s pretty daughter.  With a sarcastic bow
and thanks for the hospitality, the Kid takes leave of the banker
and his family.

The Kid stews about his treatment and figures he better hang around
to stop the Bat if he strikes again.  Wilson draws down on the Kid,
but Rawhide shoots the man’s guns right out of his hands.  That’s
when the Bat does strike again.

Here’s where the promising start is undone by the story’s too few
pages and familiar finale.  The Kid chases the Bat.  The Bat tries
to escape up a mountain.  A mountain lion attacks the Bat and both
fall to their deaths.  The Kid unmasks the dying Bat.  He was the
banker, stealing to cover his bank’s losses.  Seth Wilson has seen
the whole thing.  Seth and the Kid share a brief bromance.

Seth: I saw it all, Kid!! Reckon you got an apology comin’ to yuh!

Rawhide: Listen, hombre, his wife and daughter loved him! But me,
ain’t nobody cares about me! I want yuh to tell folks that I was
the Bat –- tell ‘em Mr. Harper died like a hero, chasin’ me to save
the bank’s money!

As the Rawhide Kid rides off, Seth thinks: But some day later, I’ll
tell the true story! So that people in years to come will tip their
hats when folks mention the Rawhide Kid!

Where have we heard that one before?

Though only six pages, “The Twister” is one of the most exciting of
the Rawhide Kid shorts.  The tension starts on the first panel and
doesn’t abate until the final shot. Lee, Kirby and Ayers all rise
to the occasion.

The Kid spots a wagon train being attacked by Apaches.  He reaches
the travelers and drives off the Apaches with his amazing gunplay.
But he knows the Apaches will attack come nightfall.  He leads the
wagon train to a narrow pass.  If they can get through it, one man
can hold off the Apaches.  Rawhide takes that job for himself and
the settlers make it to safety.

The Kid doesn’t expect to survive this.  He runs out of ammo before
he runs out of Apaches.  He’s ready to meet his fate when a twister
comes out of nowhere and sends his foes scurrying away.  It seems
fate has other plans for the Kid and, if you can’t believe an end-
of-the-story caption, what can you believe?

This issue’s five-page non-series story is “The Man Who Robbed The
Express!”  Written by Lee and drawn by Ayers, it’s another familiar
tale.  A train robber plans to rob a train, but knows the railroad
has a detective aboard.  The robber identifies the detective, then
recruits an “unshaven saddle-tramp” to watch the detective while he
robs the train’s mail car.  You know what happens next.

Yep, the saddle-tramp is the detective.  The “detective” is just a
dude from New York on vacation.  The train robber ends up back in
prison: Just another example of a criminal who didn’t have brains
enough to realize that a lawman is always a little bit smarter than
any owlhoot!

“Those who Live by the Gun...” is the issue’s finale.  Five tight
pages.  A trio of outlaws try to capture a sleeping Rawhide Kid to
collect the reward on the Kid’s head.  It doesn’t quite work that
way.  Lee’s script is sharp, but the action-packed Kirby and Ayers
art steals the show.  I love this stuff.

Look for more Rawhide Kid recollections next Wednesday.  I will be
back tomorrow with other stuff.