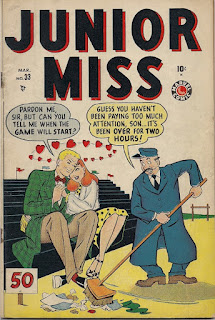 Add Junior Miss #33 [Marvel; March 1949] to the list of comic books
I own but don’t remember how I came to own.  Maybe it was an add-on
to another deal, maybe I was fooling around on eBay, which I used
to be able to do before Sainted Wife Barb and I started paying two
college tuitions, maybe someone sent it to me.  I don’t remember,
but this is how one’s Vast Accumulation of Stuff grows and grows
and grows.

Junior Miss #33 is a 52-page comic book.  The Grand Comics Database
notes it as the first issue with the “Marvel Comic” circle with the
red center.  Of the issue’s 48 interior pages, only 23 of them are
comics.  The rest of the issue’s contents, save for a single-page
“Pattern Patter” fashion feature, are text stories, some of them as
long as five pages.  I didn’t read those text stories as a kid and
I still don’t read them today.

The three comics stories star Cindy, a typical teen humor heroine
who is crazy about boys, loves to shop, and more than a little bit
nutty.  Her own comic ran 14 issues, the first 12 under the title
Cindy Comics and the last two as Cindy Smith.

All three stories are drawn by Ken Bald, who managed an interesting
face here and there but whose figures were usually very stiff.  We
don’t know who wrote the stories, but since they are not signed by
Stan Lee and don’t exhibit Stan’s witty banter, I can eliminate him
as a possibility.

One story - “Chuck Gets Framed!” - was a jolt to my modern-day
sensibilities. For her painting, Cindy has dressed boyfriend Chuck
as a “native” stereotype with a bone in his hair, but that’s not
offensive enough for her.

“I’m sorry, Chuck, but I just don’t get the native feeling! You’ll
have to put a bone through your nose, too!”

This comic book isn’t a keeper, but it does serve as a window into
a different era.  I figure on selling it to another comics fan who,
years from now, will wonder how he got it.

My first Vast Accumulation of Stuff Sale only has a few more days
to go.  All proceeds go to me.  Proceeds make me happy.  My being
happy means I can keep blogging.  So, if you would, check out the
sale list.  Your patronage is appreciated.

A new Vast Accumulation of Stuff Sale will be posted on Thursday.
I’ll be back tomorrow with more stuff.