JERRY AND THE VIKING 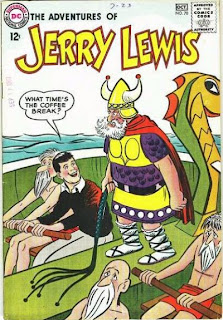 ﻿The Adventures of Jerry Lewis #78 came out in July 1963, the same
month in which Fantastic Four Annual #1 came out and changed young
Tony Isabella’s life forever.

What else can I tell you about The Adventures of Jerry Lewis #78?
Well, there’s a Viking on the cover.  And he’s holding a whip.  And
Jerry is one of the rowers along with several unhappy guys wearing
red go-go pants.  Okay...I got nothing.

Let’s just get right to today’s reviews of various Free Comic Book
Day comic books.  None of which have a Viking with a whip on their
covers.

My “best of show” award today goes to Archaia Entertainment’s Mouse
Guard: Labyrinth and Other Stories.  If I were a young kid handed
a hardcover anthology for free, I would be thrilled.  What a fine
and spiffy idea.

David Petersen’s “The Tale of Baldwin the Brave” (nine pages) is a
genuine delight with a nice moral at its conclusion.  That story’s
followed by five more, all of them, at the very least, interesting.

I got a big kick out of Nate Crosby and Chris Eliopoulos’ Cow Boy
story.  The title hero is “a young bounty hunter determined to put
his entire outlaw family in jail.”  It’s a great concept and I’m
looking forward to reading the book.

Archaia’s presentation of this material was first-rate.  If any of
the FCBD publishers deserves to gain customers from their offering,
it’s Archaia.

The runner-up of today’s batch was Walt Disney’s Donald Duck Family
Comics from Fantagraphics.  Counting the cover and back cover, it’s
34 pages of Carl Barks goodness.  Two Uncle Scrooge stories, one of
them featuring the Beagle Boys.  A Donald Duck story.  Eight pages
of single-page gags.  The stories of Carl Barks are timeless to me,
though I first read them as an adult.  I really hope today’s kids
can enjoy them as much as I do.

Voltron Force: Shelter from the Storm (Viz Media) wasn’t going to
appeal to me.  The only mecha-manga or mecha-anime I’ve ever liked
was the Exo-Squad series my pal Will Meugniot worked on many years
ago.  So I’m clearly not the audience for this comic book by Brian
Smith (story) and Jacob Chabot (art).  But this free comic delivers
a decent chunk of story and should appeal to young and old readers
who dig this sort of thing.  Free Comic Book Day isn’t supposed to
be for just me.  It needs to have comic books that will attract and
entertain a variety of interests and tastes.  I’d say this one has
a good change of reaching its target audience.

Anti/The Ride [12-Gauge] falls into the category of Free Comic Book
Day offerings that needed an adviser.  The flipbook has excerpts of
two titles, but no introductory material to give the reader a leg
up into what those titles are about.  Anti seems to be some sort of
demon invasion thing and nothing in its 12 pages stands out.  The
Ride, a black-and-white series, seems to be about a serial killer.
It’s got a little more going for it, but, without any explanatory
material, not enough to get me interested.  Modern comics creators
of episodic series need to learn the truth that was drummed into me
at Marvel by Stan Lee and Roy Thomas: Every issue of a comic book
is someone’s first issue of that comic book.

Finding Gossamyr/The Stuff of Legend [Th3rd World Studios] is a bit
closer to what I like to see in a FCBD giveaway.  Written by David
A. Rodriguez with art by Sarah Ellison, Finding Gossamyr gets 14
pages to hook prospective readers.  It still needed to give those
readers a leg up - I’d suggest smaller credits on the inside front
cover to make room for explanatory copy - but that chunk of story
was intriguing.

I can’t say the same for The Stuff of Legend part of this issue.
It starts with two pages of character images and names sans further
information on those characters...and its four page preview wasn’t
enough to interest me.

Jurassic Strike Force [Silver Dragon] was another FCBD failure in
my eyes.  No introductory material on a largely wasted inside front
cover and ten pages of a man-like dinosaur in armor fighting robots
in some sort of “Danger Room” training exercise.  It looks slapped
together from whatever material was on hand.  If you’re gonna play
FCBD, bring your “A” game to the field.

Hermes Press promoted the publisher’s My Favorite Martian: The
Complete Series Volume One with its Free Comic Book Day offering.
The cover reminds me of a TV Guide cover and I sort of think that’s
where it came from.  Inside the issue, we get “Destination Mars,”
a 21-page story from the second Gold Key issue [July 1964].  It’s
drawn by Dan Spiegle and likely written by Paul S. Newman.  There
are also single-page MFM gag pages, two of them, and a selection of
other MFM material.  If someone is interested in the original show,
this free comic book should get them thinking about springing for
the hardcover collection.  Thumbs up for this FCBD comic.

From Drawn & Quarterly, Anna & Froga/Moomin Valley Turns Jungle was
another fine free comic book for kids, though this slightly older
reader loved it, too.  Quotes from reviewers actually gave a decent
leg up to those of us discovering Anna & Froga for the first time.
Charming stuff with just a little bite.

The newly-colored Moomin Valley Turns Jungle comic strips were easy
to get into even without a leg up.  Tova and Lars Jansson’s strips
have fun characters and situations.  If I could afford the books,
I’d buy them all.  Instead, I’ll be requesting them from my local
library system.  Good stuff.

Just about the only kind of comic book I can’t get into are those
based on video games or role-playing games.  I find them worse than
comic books that read like video games or role-playing games.  My
wizard casts a spell consigning you to your basement.  That said,
younger readers who do enjoy these pastimes will likely enjoy the
Sonic the Hedgehog comic books published by Archie Comics.  Since
Archie has published well over two hundred Sonic comics, I would be
surprised if those younger readers haven’t already discovered the
Sonic comics.  But, if they haven’t, this free comic book will be
a treasure for them.

More FCBD and X-Men reviews coming later this week.  I’ll be back
tomorrow with another bloggy thing.