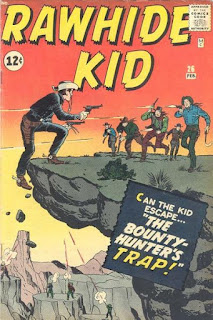 A passel of bounty hunters are backing our hero off a cliff on Jack
Kirby’s cover for The Rawhide Kid #26 [February 1962}.  Dick Ayers
inked the cover.

If the scene looks familiar, it’s because the cover of The Rawhide
Kid #22 [June 1961] also showed the Kid being backed off a cliff by
the Terrible Totem.  The similarity leads me to speculate that the
earlier cover sold quite well and publisher Martin Goodman wanted
editor Stan Lee to do something like it sans monster.  The second
time around might not have been as successful as neither cliff nor
monster motif would again be used on a Rawhide Kid cover.

This issue has three Rawhide Kid adventures and a non-series tale.
“Trapped by the Bounty Hunter” - the cover story - suffers from its
too-short seven pages.  The tale opens with an uncharacteristically
jittery Kid spooked by the thought of an unknown bounty hunter on
his trail.  That sort of tension, which, at one point, has the Kid
ready to draw on just about anybody could have been extended for
a few more pages.

“Trapped” opens strong with writer Stan Lee and the Kirby/Ayers art
team bringing real apprehension to the story.  Sure, we know that
the Kid will relax his guard and try to help someone he thinks is
in need, only to have that person turn out to be the bounty hunter.
A three-year-old could see that coming.  But it works.

When the bounty hunter is waylaid by the Grimm Gang - they’re the
ancestors Ben doesn’t like to talk about - the Kid is set free to
join the gang.  Instead, he takes them down and frees his captor,
getting himself wounded in the process.  The Kid figures this will
be the end of his trail.  He can’t shoot the bounty hunter and he
won’t be taken alive.  And then...the bounty hunter decides that he
doesn’t want to be a bounty hunter anymore.  He resigns and gives
his guns to the Kid.

Forget Namor.  The Rawhide Kid is the first mutant.  His power is
to get people to quit their jobs.  The bounty hunter quit in this
story and a sheriff did likewise in issue #21 [April 1961].  I’m
thinking this could be the springboard for the launch of a brand-
new Rawhide Kid series:

“Shoot-Out in Scragg’s Saloon” - the second Rawhide Kid tale - does
well in its five pages and manages to convey some real emotion and
tragedy.  In the aforementioned establishment, Rawhide comes to the
aid of a janitor being bullied by a mug who’s teasing the old man
about the senior’s alleged son.  The old man thinks the Kid must be
his son, the child he says was abducted by “Injuns” years earlier.
The baffled Kid exits the bar, but not before two thugs recognize
him as a wanted outlaw and plot to ambush him for the reward in the
Kid’s head.

Later that day, the janitor, now dressed in his Sunday best, visits
Rawhide in the Kid’s hotel room.  Rawhide figures the old man for
crazy.  The old man follows the Kid down the street and spots the
ambushing thugs.  He throws himself in front of a bullet meant for
the Kid, who makes short work of the thugs.

The Kid rushes the old man to a doctor and grants the dying man’s
request to “tell ‘em you’re my son!” After the man passes, Rawhide
reflects that he could’ve been the guy’s son because he never knew
his father.  The doctor reveals the truth.

DOCTOR: No, son, he wasn’t! You see, he never had a child!! It was
all just a delusion!

RAWHIDE: All he wanted was for someone to call him “Pa”! He gave up
his life for it.

With his back turned to bystanders as he walks away, the Kid says:
So long...Pa!

Talented creators can deliver a solid story with a punch in a mere
five pages, especially if they’re Lee, Kirby, and Ayers.

“Strong-Man” is the non-series story.  It’s unsigned, but the GCD
credits Lee as the writer and I’m inclined to agree.  However, the
GCD is just plain wrong in listing Ayers as the artist of the five-
pager.  Atlas buff Tom Lammers pegs Bob Forgione for the job and,
again, I’m inclined to agree.

This isn’t one of Lee’s better five-pages.  A strong guy bullies a
town.  He steals an unsigned deed from a miner.  The miner tries to
stop the bully from entering the mine.  The bully doesn’t listen.
He should have.  The mine is a dud and also unstable.  When a man
of the bully’s stature leans against a post, the mine collapses on
him. The most interesting thing about the story is the blurb that
runs beneath its final page: You’ve never read a comic like “The
Fantastic Four”! Get your spine-tingling copy today!

The Marvel Age of Comics has begun.

For his third and final Lee/Kirby/Ayers adventure of the issue, the
Kid must face “The Bullet-Proof Man!” It’s five pages of fun that
practically begs a reviewer to be cruel to it.

Cack Clugg is the Bullet-Proof Man.  Stan must have thought “Cack
Clugg” was a terrific name because he uses the full name over and
over again.  No bullet can hurt Cack Clugg.  Cack Clugg is “plumb
bullet-proof.”  Cack Clugg speaks to anyone he wants to.

However, reading this story for the first time in years, what strikes me is
how much Cack Clugg looks like a scumbag lawyer I knew back when I
owned and operated a comic-book shop in downtown Cleveland.  Cack
Clugg is downright hideous.

When Cack Clugg - now I’m doing it - tries to force his attentions
on a comely damsel, the Kid gives him a boot in the ass.  So Cack
Clugg - it’s contagious - gets in Rawhide’s face and challenges him
to a gunfight.  After Cack Clugg has a drink.

The concerned townspeople tell Rawhide he should get out of town.
The Kid asks for information about - say it with me - Cack Clugg.

Ain’t much to tell! He comes from the east!

When Cack Clugg returns to draw on the Kid, Rawhide uses a lasso to
yank the gun from Cack Clugg’s pudgy hand.  Then Rawhide clobbers
Cack Clugg with one-two punches.  The Kid explains his actions and,
if you haven’t been laughing derisively this whole time, this will
do it for you:

Look at my bullets! They’re blanks! Cack Clugg was nothin’ but a
pickpocket!

He’d get next to a man and change his bullets for blanks without
anyone knowin’ it!

Ain’t any pickpockets out west, but when I heerd he came from the
east, I suspicioned it right away!

Cack Clugg...first pickpocket west of the Mississippi.  Maybe not
Stan and Jack’s finest effort, but the kind of entertaining 1960s
silliness that you can’t hardly find back east.

Look for more Rawhide Kid recollections next Wednesday.  I will be
back tomorrow with other stuff.