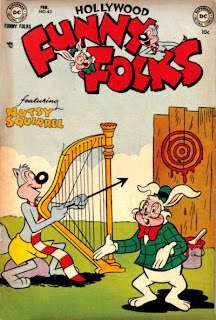 ﻿Hollywood Funny Folks #43 was on the newsstands in my birth month
of December 1951.  The cover features Nutsy Squirrel and his then-
partner Robert Rabbit.  On this cover by some unidentified artist,
possibly Rube Grossman, Nutsy looks kind of sort of like a cat to
me and Robert looks like a kid in a rabbit costume.

Here’s what I know and it is precious little.  Nutsy was created by
writer Woody Gelman with art by Irving Dressler.  In 1951, Gelman
was still writing the character but the feature was being drawn by
Grossman, who drew lots of funny animal comics.  Nutsy was pretty
much insane.  Gelman wasn’t.  He also created the Dodo and the Frog
for DC, did lots of great stuff for Topps, and founded Nostalgia
Press, whose publications included reprint volumes of Flash Gordon,
Little Nemo, EC horror comics, and Scorch Smith.

Despite appearing in Hollywood Funny Folks, originally titled Funny
Folks, Nutsy didn’t appear in screen cartoons.  DC just thought the
comic book would sell more copies if its young readers believed its
characters came from cartoons.  I know, it’s hard to believe that
DC would ever lie to its readers or its freelancers or its staffers
or...you get the picture.  With truth and justice out the window,
the current Superman only stands for the American Way.  Except it’s
more like the Corporate Way.  But I digress.

If I weren’t unwelcome at DC, I’d pitch a new version of Hollywood
Funny Folks to the company.  One day of watching entertainment news
and Hollywood-based “reality” series would give the writer of such
a title all the “funny” folks he would ever need.

Bob Hoskins of Stormwatch Comics (West Berlin, New Jersey)
sent me Free Comic Book Day comics so I could write about
them here.  A good man, he is.

Atomic Robo/Neozoic/Bonnie Lass [Big 5 Comics] had three stories or
snippets of stories.  Of the three, Atomic Robo was the tightest.
The title hero is a robot built by Nikola Tesla who now heads up an
organization that uses science to save the world.  Written by Brian
Clevinger with art by Scott Wegener, it did a good job introducing
the characters and concepts in a fun little tale.  If I were buying
comics, Atomic Robo would rate a “maybe buy” from me.

Neozoic didn’t work as well with me.  The premise of the series is
that dinosaurs never died out, but the eight pages in this special
issue didn’t show a wide enough picture of what that world would be
like.  I’d likely pass on it.

Bonnie Lass is the daughter of a famous pirate and her adventures
involve supernatural and weird creatures.  The six-page intro was
fun.  I’d probably give it a shot.  The story was by Michael Mayne
and Tyler Fluharty with Mayne on script and art.

Dark Horse Comics offered a pair of flip books: Buffy/The Guild and
Serenity/Star Wars.  Each of the issues had a two-page fragment of
a new comics series called Alabaster.

Written by Andrew Chambliss with art by Georges Jeanty and Dexter
Vines, the Buffy story found the vampire slayer taking a vacation
on Spike’s spaceship and facing a vampire space bug.  It was a good
story and reminds me I should catch up on DH’s current Buffy book.

This FCBD issue was my first exposure to The Guild, which seems to
be about a group of role-playing game players.  I wasn’t completely
sold on this one - story by Felicia Day with art by Jonathan Case -
but I liked it enough to track down a collection if such a volume
exists.  More of the story might win me over.

As for the Serenity/Star Wars issue, I enjoyed the Serenity story
(script by Zack Whedon, art by Fabio Moon) and was less entertained
by the Star Wars tale (script by Zack Whedon, art by Davide Fabbri
and Christian Dalla Vecchia).  I’d buy the former and likely pass
on the latter, but that’s more due to ambivalence towards the Star
Wars prequels rather than the comics themselves.  I just can’t get
into Star Wars these days, even when the comics feature characters
I really like (Han Solo and Chewbacca).

The Infernal Devices: Clockwork Angel [Yen Press] gave readers the
manga’s entire 29-page first chapter.  However, as can sometimes be
the case with manga, there wasn’t enough background/information in
the chapter to give readers easy entry into the story and the world
of that story.  I’d pass on this one.

Jurassic Strike Force 5 [Silver Dragon] has 10 pages of a dinosaur
in armor fighting a robot...without any explanation of what’s the
back story.  Surprise, there’s also an ad for action figures from
the series.  Not so surprising, I found this FCBD special boring.
If I were buying comics, I couldn’t imagine ever buying this one.
Where’s the meteor when you need it.

Watch for more of my looking gift horses in the month as I continue
to read FCBD comics.