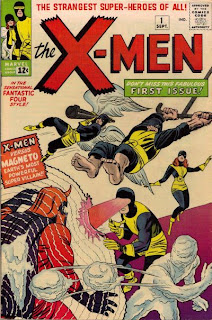 ﻿No vintage comic book cover from my birth month of December, 1951
today.  Instead, it’s a vintage cover from another important month
in my comics life.

X-Men #1 [September 1963) was on newsstands in July 1963, the month
I bought and read the greatest comic book of all time.  The short
version of that pivotal moment in my life goes like this:

Dull family vacation. Parents didn’t like me spending my “souvenir
money” on comic books.  Said I could only buy one more.  Defiant,
I bought the most expensive comic book on the rack: Fantastic Four
Annual #1.  37 pages of Sub-Mariner Versus the Human Race. Pin-ups
and feature pages.  Reprint of FF origin.  Sudden realization that
people got paid to write and draw comic books.  Knew that’s what I
wanted to do when I grew up. Life changed forever.

I’ll give you the long version in some future bloggy thing, but I
wanted to let you know I’ll be running comic book covers from this
month and other important-to-me months along with the covers from
my birth month.  I’ll be fun for me and you.

Getting back to X-Men #1, which I bought from a mail-order dealer
about a year after it came out, I am taken aback by the Jack Kirby
cover.  We don’t see the face of Magneto, though his back strikes
me as the dominant image on this cover.  Second would be the shots
of Cyclops and Iceman, whose faces lack facial features.  There is
a theory that X-Men was rushed on to the schedule because Daredevil
#1 was way behind schedule, which could explain why this cover, to
me, at least, doesn’t seem all that well thought out.  But it does
have an excitement to it.

The Grand Comics Database has three possible inkers for the cover:
Sol Brodsky, Frank Giacoia, and Paul Reinman.  My gut leans toward
Brodsky.  What do you think?

Inside the issue: “X-Men,” one of the most important stories of the
Marvel Age of Comics.  In 23 pages, writer/editor Stan Lee and pencil
artist/likely co-plotter Jack Kirby introduced us to Professor
Xavier, Cyclops, Beast, Angel, Iceman, Jean Grey and Magneto, all
of whom would go on to appear in thousands of comic books over the
next half-century.  I think I might have read half those comics in
the past couple weeks.

Exaggeration for effect aside, I have been reading dozens of X-Men
comic books from the past several years in an attempt to “catch up”
with the franchise before I start reading Marvel’s Avengers vs. X-
Men event.  With the Avengers having added dozens of members since
“Civil War” and the mutant population reduced to 200 or so by the
Scarlet Witch several years back, that strikes me as a fair match.
Maybe not an entertaining match, but I’ll reserve judgement on that
score until I actually read the comic books.

The two overwhelmingly negative things I have taken away from all
this X-Men reading are:

Marvel has brought back dozens of lame characters from the 1990s.
They have brought them back from the dead.  They have re-powered a
bunch of them.  They have introduced alternate universe versions of
some of them into the main continuity.  They have reminded me why
the likes of Rob Liefeld, Jim Lee, and clones thereof drove me away
from the X-Men comic books.  That stuff was okay for pre-teens and
teens and obsessive adult children, but it rarely entertained me.

The other thing is...Wolverine.  Wolverine has apparently regained
all his memories, something I missed whenever it happened.  So now
we know that he did really terrible things - one story hints that
he was involved in the assassination of John F. Kennedy - and was
tortured and victimized over and over again.  Now if all this past
pain and suffering made him a more noble hero, I could enjoy some
of these way-too-many Wolverine comic books more.  But, since the
fans seem to like a violent Wolverine slashing his opponents into
lunch meat, I’m not seeing the Wolverine I’d prefer.  Indeed, since
even the violent Wolverine acts in inconsistent manner depending on
the story, he’s become a character that no longer makes any sense
to me.  Which is a shame because he should be a classic character.
And he’s not.

His healing factor has become absurd.  He apparently survived the
atomic bombing of Hiroshima.  He’s Wile E. Coyote, getting blown to
bits by his latest Acme purchase and then coming back seconds later
to go after the Road Runner again.

He appears in way too many comic books.  He’s an Avenger and he’s
on multiple X-Men teams.  He has solo adventures.  I’d like to see
him removed from all of those teams and almost all of those books.
Let him be a loner who occasionally interacts with other denizens
of the Marvel Universe.

There are things I’ve liked in these X-Men comics as well, notable
Peter David’s consistently fine work on X-Factor.  I won’t be doing
a blow-by-blow reviewing of these comics.  Many of them are years
old.  However, I will try to hit the high and low points in what’s
left of today’s bloggy thing and over the next few bloggy things.

For reasons that make no sense even to me, I seem to simultaneously
reading both the New Mutants title that relaunched in 2003 and the
one that launched in 2009.  Though I’m but a handful of issues into
either of them, the differences couldn’t be more profound.

Written by Nunzio DeFillippis and Christina Weir and edited by C.B.
Cebulski, the 2003 version is character-driven and full of honest
drama and emotion.  It’s a lovely piece of work.

The 2009 version. Not so much.  In fact, not at all.  The writing
is bland, the brutality is high, the characters aren’t interesting.
From my point of view, with the mutant population being diminished
so dramatically, careful consideration needs to be given as to how
many X-teams the world needs.  With so many young mutants already
on the front lines of other X-teams, I don’t see any need for a New
Mutants title.  So far, there’s nothing to see here.

I’ll be back tomorrow with another Rawhide Kid Wednesday and then
on Thursday with more X-pounding on the X-Men.