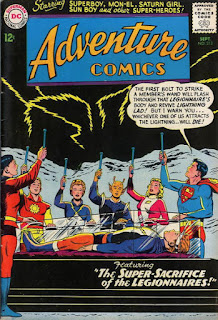 ﻿From July of 1963, we have Adventure Comics #312 [September 1963],
featuring “The Super-Sacrifice of the Legionnaires!”  Those super-
kids of the 30th Century are playing Russian roulette with bolts of
lightning.  The lightning will flow through the body of the first
hero struck by lightning and revive the deceased Lightning Lad.  On
the downside, whoever gets struck by the lightning will die.  When
I look at this Curt Swan/George Klein/John Forte cover today, I’m
thinking “stupid kids,” but, back then, I thought it was very cool.
Talk about real friends!

“The Super-Sacrifice of the Legionnaires” (14.34 pages) was written
by Edmond Hamilton and drawn by John Forte.  If you’re confused by
Forte’s cover credit, it’s because he inked the heads of the Legion
members.

This story and Keith Giffen are responsible for the flat-out oddest
Legion sexuality of all time.  In this story, Saturn Girl fixes the
“contest” to ensure she will be the fried Legionnaire.  But Proty,
Chameleon Boy’s intelligent shape-changing protoplasmic blob/pet,
takes her place and sacrifices his/her/its life for Lightning Lad.
Except, according to Giffen in a decades-later Legion story, what
actually happened was Lightning Lad’s body was revived with Proty’s
mind.  Which only Saturn Girl knew.  Just as she knew who she was
marrying and doing the future fandango with and having kids with.  I
suspect Giffen’s spin on the marriage was bounced from continuity
three or four Legion reboots ago, but I’m still too creeped out to
research it.  Mind you, I’m not against Saturnian/protoplasmic blog
marriages.  I just find it very sad that Saturn Girl and Proty had
to hide their love that way.

Backing up the lead story is “Lana Lang, Hollywood Star,” a 10-page
Superboy drawn by George Papp, in which Clark Kent’s neighbor gets
hired to play a movie jungle queen.  The writer of this story has
not yet been identified, so I’m just going to go with Diablo Cody
until someone proves me wrong.  I don’t really believe Diablo wrote
this story, but, when I made a similar joke about Ryan Reynolds a
few days ago, my blog got a link in his Twitter feed.  I wanna see
if that works a second time.

Comments to this bloggy thing have to be approved by me before they
are posted.  That doesn’t mean I don’t love them because I do love
them a lot.  But approval defeats and vexes the trolls and usually
sends them scurrying off to places where their churlish behavior is
tolerated and even applauded.

Looking at some of your recent comments...

Ben Herman wishes DC would reprint my first Black Lightning series.
So do I...and the second one as well.  DC’s not interested.  When
my creation was heading towards his 25th anniversary, I asked DC if
I could negotiate a license to publish reprint volumes of my first
and second series.  The company laughed in my face.  If I thought
another such inquiry would yield a different result, I would take
another shot at it.  Sigh.

Some of my bloggy readers only like comics from a certain era or of
a certain genre, usually the super-hero genre.  That is certainly
their right, but I think they’re missing out on some great stuff.
Check with your local library system.  You might be able to sample
some new and different comics at no expense.

Despite one reader’s comment, there’s no evidence that Superman is
the newly-gay character in the New 52 Universe.  DC specifically
said it was an iconic male character who had not yet been shown in
their new universe.  That eliminates Superman.  I can’t recall for
certain, but I think this version of the news was being reported by
Fox News and other discredited right-wing organizations.  In other
words, they are making up shit.  Again.

I didn’t list all of my favorite websites last weekend.  I’ll get
to the others soon.

Mark Verheiden loves “Rawhide Wednesdays,” as do all classy refined
readers of this blog.  Unfortunately, unless Marvel rushes out the
second Essential Rawhide Kid volume, we only have eight more weeks
of western wonderment to come.  I can’t afford to buy later issues
at present.  My current plan is to follow “Rawhide Wednesdays” with
another weekly theme.  Sgt. Fury has been suggested, but I’m open
to another suggestions as well.

Fantastic Frank asked if I would be a guest on his blogtalk radio
show.  I’m not doing live appearances or interviews right now, but
that could and almost certainly will change later this year.  I’m
also hoping to resume attending comic-book and related conventions.
Interested parties should contact me via e-mail.

Brad Walker posted that actress Felicia Day is the star and creator
of The Guild, which I knew but forgot to mention when I wrote about
the series appearance in a Free Comic Book Day giveaway.  Day has
also appeared on an episode of Supernatural and several episodes of
Eureka.  She was superlative in both.  Were I young and unmarried
enough to have a fantasy girl, she would be her.

Bill Thomas asked if I would be blogging about Tony DeZuniga, who
passed away a short time ago.  When we lose a comics creator, I’m
most likely to write about it on my Facebook page, which is what I
did on that sad occasion.

My friend Steve Chaput commented on his disinterest in all things
X-Men.  However, I’m sort of in to them at the moment, so you and
he can expect more of my comments on them over the next few weeks.
I generally write about whatever shiny object appears in my brain.
Lately, that’s been X-Men and Free Comic Book Day comics.  Sooner
rather than later, other shiny objects will catch my attention and
I’ll write about them.  It’s the way of the blog.