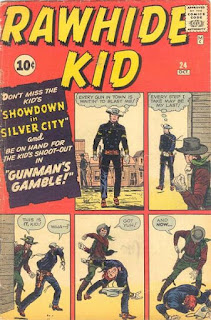 I love the cover of Rawhide Kid #24 [October 1961].  Marvel did a
few of these multi-panel covers, but not so many of them that they
lost any of their impact.  There’s tension in every one of the five
Jack Kirby panels (inked by Dick Ayers) here.  Had I spotted it on
a newsstand, I would have bought it immediately.  Alas, such covers
were already a thing of the past by the time I discovered Marvel.
It’s a shame. I’d love to see an artist attempt such a cover today.

Written by Stan Lee with art by Kirby/Ayers, “Showdown in Silver
City” is 13 pages of western fun, assuming one doesn’t ask too many
questions or do any historical research.  Aw, heck, I do both and
I still enjoyed this story of a stagecoach robber who looks enough
like the Rawhide Kid to impersonate him.

The story opens with the Kid getting on a stagecoach.  The driver’s
not thrilled with the prospect, but the young outlaw paid for his
ticket and has a right to ride.  I’m guessing Rawhide wasn’t wanted
in New Mexico at the time.

How do I know this story takes place in New Mexico?  I’ll explain
that in a bit.  What I don’t know is...where the heck did the Kid
leave his horse that he had to ride a stagecoach?

The stagecoach is attacked by the robber and his gang.  They wound
the driver and an older passenger, but the Kid saves both men and
chases off the bad guys with his incredible marksmanship.  However,
the leader of the gang got close enough to realize that, sans his
beard, he looks enough like Rawhide to pass for him.

In town, the outlaw leader ambushes Rawhide in an alley, knocks him
cold, and takes his clothes.  By the time the Kid, now clad only in
his long johns, comes to, the robber has committed several crimes.
Seeing the dazed Rawhide Kid, the local lawman arrests him.  Which
is only a minor inconvenience as the Kid breaks jail just one page
later.

Still posing as the Rawhide Kid, the robber holds up another stage.
He feigns the Kid’s amazing gunplay by using a telescopic sight on
his rifle.  My first reaction was to doubt this, but, a wee bit of
research showed me such sights were used in the Civil War.  Near as
I can figure from various sources, this story would have happened
around 1880, so the telescopic sight is believable.

The faux-Kid looks to make a easy score until an old man challenges
him.  It’s the real Rawhide in disguise and he makes short work of
his imposter in a nifty Kirby fight sequence.  The local lawman is
still set to arrest the real Rawhide and hold him for the sheriff
when the sheriff shows up.  Remember that older guy Rawhide saved
on his first stagecoach ride of this story?  He’s the sheriff and
there’s no way he’s arresting the Kid.

Rawhide gets his clothes back and, apparently, steals the robber’s
horse for his usual last-panel ride-off:

And so the saga of the showdown in Silver City was ended...and the
Rawhide Kid was free to ride on into new adventures, because his
path had briefly crosses that of another legendary figure –- one
who was equally famous in how own right –- under the name of Pat
Garrett!

Stan’s love of guest appearances by real-life western figures is,
as usual, a problem here.  If the Rawhide Kid was born in 1850 as
has been stated, he would be 30 years old at the time of this tale
and he’s clearly much younger.  You see, Garrett was the sheriff of
Lincoln County, New Mexico for a few years starting in 1880.  Born
in 1850, Garrett was 30 years old when he got the position and not
the older man portrayed in this story. Whoops!

If Stan and Jack were working in the Marvel method, as I suspect is
the case with this story, then I would put forward the theory that
identifying the sheriff as Pat Garrett was something Stan came up
with when he wrote that last panel.  It probably wasn’t in the plot
he worked out with Jack.  My theory is based on a speculation and
a fact.  The speculation is that, if this element had been part of
the plot from the get-go, Kirby would’ve made more of it...and the
fact is that, based on my own Marvel writings, it’s not unusual for
a writer to come up with some “brilliant” idea in the scripting of
already-penciled pages and put that “brilliant” idea into either a
caption or a word balloon.  I’d bet the same thing happened in that
early issue of X-Men where Professor Xavier thinks pervy thoughts
about the teenage Jean Grey.  But I digress.

This issue’s non-series story is “The Man Without a Gun” (5 pages)
by Lee and Ayers.  Clay Harder and his wife come to town to settle
down and work their new farm.  The town thug tries to intimidate
Harder because the newcomer does not carry a gun.  Later, the town
lawman warns Harder he needs a gun for protection.  Harder remains
unconvinced.

When the thug demands Harder and his wife  sell him their farm for
a tenth of what they paid for it and then threatens them with his
own gun, Harder proceeds to give a beat down to the thug and his
henchmen.  He takes one of their guns and send them running for
their lives.  The moral of the tale is there’s nothing wrong with
a gun in the hands of a good man.  I don’t disagree.  It’s a common
theme in many Marvel western stories of the era.

The final caption reveals Harder is a retired captain of the Texas
Rangers.  The twist comes out of nowhere.  I’m thinking Stan might
have felt the story needed an extra oomph of some sorts.

In the spirit of the playing fast and loose with history aspect of
Marvel westerns, I would’ve ended this story differently.  Harder
would still deliver the beatdown, but it would be his wife grabbing
the gun.  She would shoot the guns out of the hands of the bad guys
and then shoot the belts or suspenders off their pants.  The thug
and his gang would run off clutching their pants to keep them from
falling around their knees.  Because, you see, Harder’s wife used
to be known as...Annie Oakley!

The second Rawhide Kid story - “Gunman’s Gamble” - is undone by its
five-page length.  The Kid comes to the rescue of an old lady about
to be evicted from her house by a heartless banker.  The Kid only
has half the money required to pay off her mortgage, but challenges
the banker to a shooting contest.  The Kid wins easily.  The banker
realizes who the Kid is, tries to capture the Kid for the reward,
and gets his ass handed to him again.  Terrified, the banker gives
the old woman the mortgage to her home and promises to tend to her
garden for the next decade.  With more pages, this Lee/Kirby/Ayers
short could have been hilarious and a nice counter to the general
grimness of the issue's other stories.

Look for more Rawhide Kid recollections every Wednesday.  I will be
back tomorrow with more stuff.