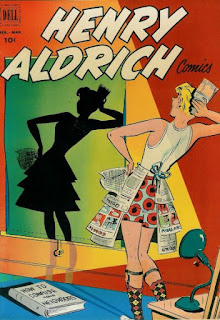 ﻿Henry Aldrich #10 [February-March 1952] falls smack in the middle
of the 22 issues published by Dell Comics in the first half of the
1950s.  Aldrich was allegedly an/the inspiration for the amazingly
successful Archie of Archie Comics fame, but Henry’s own journey to
super-stardom is pretty interesting of itself.  With a tip of the
hat to Wikipedia...

Created by playwright Clifford Goldsmith, Henry was basically a bit
character in the author’s What a Life.  The play was produced and
directed by George Abbott and ran for 538 performance on Broadway
from April 13, 1938 to July 8, 1939.  Played by Ezra Stone, Henry
caught the eye of critics and the audience.  So much so that Rudy
Vallee asked Goldsmith to adapt the play for sketches that aired on
the bandleader’s radio program.  This was followed by a 39-week run
of sketches on The Kate Smith Hour.

The Aldrich Family got its own show in the summer of 1939. Opening
each show was a soon-to-become-famous exchange between Henry’s mom
and Henry: "Hen-reeeeeeeeeeeee! Hen-ree Al-drich!" followed by the
high-pitched "Com-ing, Mother!"  The teenage situation comedy ran
from 1939 to 1953.

Paramount Pictures would make 11 Henry Aldrich films between 1939
and 1944 with Jackie Cooper playing the teenager in the first two.
A television series with an ever-changing cast debuted on October
2, 1949 on NBC and continued until a month after the radio series
ended in 1953.

The TV series was responsible for the lowest moment in the life of
Henry Aldrich.  From Wikipedia:

The program garnered some adverse publicity when film and radio
veteran Jean Muir was signed to play Mrs. Aldrich in the second
season, which was to begin on August 27, 1950. Shortly before
Muir's scheduled premiere, right-wing groups accused the actress of
being a Communist sympathizer (her name appeared in Red Channels,
a pamphlet listing the names of performers allegedly involved in
left-wing activities), and General Foods, the show's sponsor,
cancelled the first episode of the new season, replacing her with
Nancy Carroll a week later, when the series returned on September
3rd. Muir went on to defend herself before a Congressional
committee, but her career never recovered from the charges.

Something to keep in mind watching today’s right-wingers indulge in
bigotry, fear, hate-mongering, distortion and outright lies.  They
haven’t changed in over 50 years and I long for the day when they
are consigned to the dustbin of history.

Lord knows what today’s right-wingers would have made of the above
comic-book cover.  Additionally, in the issue’s text story, which
ran on its inside front and back covers, Henry dresses up as Cupid
for a Valentine’s Day dance.

The Grand Comics Database doesn’t have a credit for the artist of
the cover, text story illustrations, or the longest of the issue’s
four comics stories.  However, Bill Williams signed his 12-page and
single-page Henry Aldrich stories as well as a six-pager starring
Homer Brown, Henry’s best friend.

All of the above is second-hand knowledge.  I’ve never listened to
the Henry Aldrich radio program, watched any of the movies, or read
an issue of the comic book.  His TV series was long-gone before my
family owned a television set.  But, reading the various accounts
of Henry’s history, it becomes clear to me that many of the things
we associate with teen humor comics stem from Goldsmith’s creation.

Perhaps the next time Archie takes a stroll of the sort that have
previously led him to alternate pasts and futures, he could meet up
with Henry.  I suspect the two of them would hit it off.