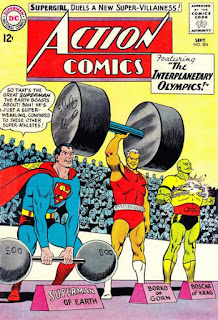 ﻿Action Comics #304 [September 1963] hit the newsstands in the month
of my awakening.  Backtrack a bloggy thing or three to understand
what I mean by  "month of my awakening.".

Although my memory of this issue is vague, I almost certainly read
it when it was published or soon thereafter.  Superman comic books
were frequent trade material in my neighborhood, though the ranks
of comic-book readers were thinning out as my peers got older and
allegedly outgrew comics.

Comics publishers certainly believed their audience turned over on
a regular basis.  This issue’s “The Interplanetary Olympics” is a
reworked version of the Superman story of the same title in Action
Comics #220 [September 1956} from seven years prior.  The reworked
version was written by Leo Dorfman, penciled by Curt Swan, inked by
George Klein and ran 12 pages.  The original version ran 10 pages
and was drawn by Al Plastino.  As tentatively identified by comics
detective Bob Bailey, that original version was likely written by
Edmond Hamilton.

Also written by Dorfman, “The Maid of Menace” introduced a new foe
for Supergirl.  The Black Flame was Zora Vi-Lar, a super-criminal
who escaped from the bottle city of Kandor.  Drawn by Jim Mooney,
Zora was a combination of cute and evil.  The 12-page story was a
favorite of mine from that era.

More comics from the month of my awakening coming soon.

DC Comics has made this announcement: “One of the major iconic DC
characters will reveal that he is gay in a storyline in June.”  The
announcement has generated hundreds maybe even thousands of online
comments and much speculation as to the identity of this character.
What it appears we know, besides the character being gay, is that
he hasn’t yet been introduced in the “New 52" Universe.

I’m all for the inclusion of more diverse characters in super-hero
universes.  I’m okay with a new gay character who was straight in
the old DC Universe continuity, the one that was rendered null and
void by the New 52 Universe.  Well, mostly null and void, as Batman
and Green Lantern got to carry most of their baggage from that old
universe to the new one.

That character you liked from the old DC Universe is still the same
guy he was.  He’s just in the old universe, the one that is never
coming back and would you like to buy this bridge.  The new version
of that character is just that: a new character.

Black Lightning, the character I created in a partnership with DC
Comics that DC has never fully honored, has been suggested once or
twice in the online chatter.  I suspect some of that chatter came
from folks trying to get me riled.  Amateurs.

How would I feel about Black Lightning being the new gay character?
I’d be against it.

I’d be against it unless I was the one writing it.

Given my contentious relationship with DC and my profound lack of
confidence in their ability or desire to ever do right by either my
creation or myself, I’m sure they would muck it up.  The New 52 is
filled with badly-written and badly-drawn comic books.  There are
some good and even great titles among them, but some of the others
are among the worst comics DC has ever published.

However, for the sake of this bloggy thing, let’s imagine a reality
where I either have reclaimed Black Lightning from DC Comics or the
company has decided not to be douche bags when it comes to me and
my creation.  What would I do?

I’ve been telling friends for some time that if I ever wrote Black
Lightning again that I would largely reinvent the character.  He’d
still be Jefferson Pierce.  He would still be a teacher and man of
faith.  He’d still have the electrical powers, though I’ve figured
out some new ways to use those powers in my long absence from the
character.  But, just as I added then-modern sensibilities to Black
Lightning when I wrote his 1990s series, I’d recreate Jeff Pierce
for 2012.

When I was writing Black Lightning in the 1990s, I actually thought
about having him meet and become romantically involved with a man.
I ditched the notion because the obvious chemistry between Jeff and
his ex-wife was so much fun to write.

I started thinking about it again after a conversation with a black
writer at a convention.  He had asked me about handling sensitive
social issues in comics scripts and I told him what I had planned
to do with a gay black male character I had introduced in an issue
of the 1990s Black Lightning.  As I saw it, Jeff Pierce would have
seen the struggle of LBGT people as akin to the struggles of black
people in our country.  It was entirely in character for Jeff to be
supportive of that struggle.

The writer took offense at what he clearly thought was a slight of
some sort.  He rubbed his arm and said something along the lines of
“black don’t come off.”  With all due respect, “gay don’t come off
either.”  The conversation ended on a friendly note, but that quick
moment of awkwardness stayed with me.

I realize some deeply religious blacks are opposed to equal rights
for gays.  I think they are wrong to oppose them.  In the case of
Christianity, I think the message of Jesus is pretty clear in the
matter.  Love thy neighbor.  Simple and elegant.

I realize some blacks resent the struggle for equal rights of LBGT
Americans being put on the same level as their struggle.  There’s
a difference, to be sure, but it’s not a big enough difference for
anyone to support denying equal rights to gays.

Obviously, it’s not just some blacks opposing equal rights for the
LBGT community.  It’s an issue that raises all sorts of emotions in
all sorts of people from all walks of life.

The contentious nature of this debate.  The personal drama of those
who are on the front lines of this debate.  The often high price a
gay person has to pay to accept, embrace and live what is in their
hearts and very beings.  These are the building blocks of terrific
stories and writers should always strive to tell terrific stories.

In the real world, I won’t get the chance.  DC isn’t going to even
try to do right by me or Black Lightning.  If they were to remake
Jeff Pierce as a gay man, I probably won’t be happy with how it’s
handled.  Don’t blame me.  Blame DC’s long history of messing up my
creation.  I’ve no reason to be optimistic.

I don’t think the chances of Black Lightning being the major iconic
character who is now gay in the New 52 Universe are very high.  I
might think of him as iconic, but I don’t imagine the powers that
be at DC Comics do.  But, if he were and if that would bother you,
I can offer this consolation to you:

The Black Lightning stories I wrote in the 1970s are still there.
Unchanged.

The Black Lightning stories I wrote in the 1990s are still there.
Unchanged.