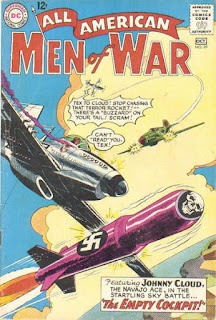 ﻿For reasons explained in my previous bloggy things, I’m looking at
comic books that went on sale in July or 1963.  All-American Men of
War #99 [September-October 1963] was one such comic book.

The cover is by Irv Novick, who also drew the Johnny Cloud story it
illustrates.  “The Empty Cockpit” (15 pages) was written by editor
Robert Kanigher.  Johnny Cloud was a Navajo fighter pilot and one
of Kanigher’s many attempts to diversify the characters appearing
in these titles.  If he were still alive and writing these comics
today, I’m sure we’d see more African-American soldiers, a Muslim
soldier, women soldiers, and even gay soldiers.

The second and final story in the issue was “Attack From Yesterday”
by Hank Chapman with art by Jack Abel.  Chapman was one of the best
writers of the 1950s, doing dozens of horror, war and other stories
for Atlas/Marvel.  Abel worked for many comics publishers and was
one of the nicest guys in the industry.

In 1963, if I bought a DC war comic, it was usually Our Army at War
with Sgt. Rock or Star Spangled War Stories with its wild tales of
soldiers fighting dinosaurs.  Fun stuff.

Look for more comic books from this month in future bloggy things.
Lots more to go.

I have a huge stack of X-Men comics to talk about, but I’ll keep my
comments as brief as possible.  I’m currently reading comics dated
December 2011, so I’m closing in on my target goal of being almost
current with the X-titles.

I’ve mentioned my lack of enthusiasm for the “Curse of the Mutants”
event.  It was tedious going and, every time I thought I was done
with it, there would be another aftermath issue.  Despite that, I
did enjoy two spin-offs from the event.

The two X-Men vs. Vampires anthologies featured some good stories.
In the first one, I liked “From Husk ‘Til Dawn” by James Asmus and
Tom Raney - what a great title - and a Dazzler tale by Christopher
Sequeira and Sana Takeda.  The second issue had a swell Karma story
by Howard Chaykin.

During the “Curse of the Mutants” event, the powerless Jubilee was
turned into a vampire...and has stayed that way.  In the four-issue
Wolverine and Jubilee series, Logan tries to help Jubilee hold on
to her humanity and cope with her new life.  Written by Katherine
Immonen with art by Phil Noto, it’s an entertaining series with a
lot of suspense and a lot of heart.

X-Men was launched as part of the “Curse of the Mutants” event and
it’s been the least interesting of the X-Men titles from its start.
It went from “Curse” to a Spider-Man team-up involving humans and
mutants being turned into lizards. Then we got one of the “Curse”
cling-ons.  Then we got a story in which the tedious Neo got wiped
out by even more tedious villains and which involved a X-Men battle
the mutants forgot about and which I will certainly forget about as
soon as I post this.  Then there was that equally forgettable trip
through the Bermuda Triangle with Doctor Doom.  Unless you are an
X-Men completist, you really don’t need this title.

Astonishing X-Men threw me because it was alternating between two
distinct stories.  I’m not talking an “A” plot and a “B” plot here.
I’m talking this issue has this story and the next issue has that
story and the issue after that goes back to the first story.  What
the heck was that about?

The better of the two stories had a group of X-Men accompanying the
young mutant Armor to her native Japan for the funeral of her mom
and brother.  At the same time, Mentallo is seizing control of the
monsters on Monster Island and blackmailing Roxxon with them.  The
names of the monsters have been changed to protect the brilliantly
guilty Daniel Way, but we all know who they are.  It’s an exciting
and fun story with Armor’s situation adding a great deal of heart
to the mix.  Really good stuff.

The lesser of the two stories had the Brood infecting both mutants
and SWORD agents on a space station.  X-Men transformation stories
are as common as X-Men alternate reality stories.  Neither excites
me much.

On a more positive note, Astonishing X-Men #43 was a spiffy done-
in-one adventure starring Emma Frost and Danger.  It was written by
James Asmus and drawn by David Yardin with Norman Lee and Rachelle
Rosenberg.  Emma has become a favorite of mine.

Generation Hope #9 is another good done-in-one, exploring what can
happen when Hope and her team don’t reach a newly-powerized mutant
in time.  It’s written by Kieron Gillen with art by Jamie McKelvie.

New Mutants continues to flounder.  Following “Age of X,” Cyclops
recruited the team to deal with X-Men unfinished business.  While
I can understand the concern - only 200 mutants left on Earth and
all - that scenario never gained traction before it was kicked to
the curb for the interminable “Fear Itself” event.  Nothing to see
here, at least not anything worth the looking.

I’ll give Wolverine writer Jason Aaron props for one element of his run
on the book.  The Red Right Hand’s revenge on Wolverine was about
as chilling and nasty a scheme as I’ve seen.  It wasn’t worth all
those issues, but it was memorable.  The issue in which all Logan’s
super-hero pals track him down and tell him how much they love him
was also memorable, albeit not in a good way.

Peter David’s X-Factor continues to entertain and surprise me.  It
also managed to avoid the events, which helps the title entertain
and surprise me issue after issue.

What I like about X-Men Legacy is the journey Rogue has been on in
the book.  What I don’t like is that journey going on as long as it
has.  But I also like how writer Mike Carey has handled Legion, the
scary son of Charles Xavier.  What I also don’t like is Rogue and
several X-Men having adventures in space.  Less than 200 mutants on
Earth, remember?  Overall, I’m still enjoying the title.  If I were
buying it instead of borrowing it, I’d keep buying it.

One more for the road. X-Women was a 2010 one-shot wherein Rogue,
Storm, Kitty, Psylocke and Rachel Summers go on a vacation and have
an adventure.  Written by Chris Claremont and drawn by the amazing
Milo Manara, it’s spiffy fun and sometimes that’s all I need from
a comic book.  Worth looking for.