I FLIRTED WITH MADNESS 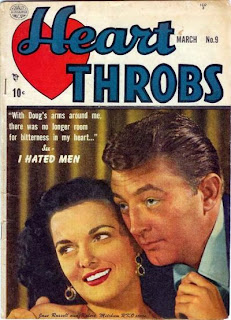 ﻿It’s been a while since I ran a cover from December 1951, which, as
we all know, is my birth month.  It’s Heart Throbs #9 [March 1952].
This Quality Comics series was returning to the newsstands after a
year-long publishing hiatus.  It would run 46 issues before being
sold to DC Comics when Quality gave up on the comic-book business.

Appearing on the issue’s photo cover are Hollywood’s Jane Russell
and Robert Mitchum.  The only clue I have as to what “I Hated Men”
was about is what’s in the cover copy.  The Grand Comics Database
doesn’t have any information about story content or the creators of
those stories.  But it does have their titles:

I was going to make up plot synopsis for these stories to amuse my
legion of bloggy thing readers - we hit 100,000 views on Monday -
but the best I could come up with the dysfunctional super-hero duo
of the Blonde Heartbreaker and sidekick Mother’s Boy.  Maybe I’ll
write that origin story someday.  I already flirt with madness on
a daily basis.

Hmm...”I Flirted With Madness!”  That would be a good title for a
romance comic story.

Five Star Comics is published by Five Star Comics, a collective of
artists and writers based in the Ohio Valley and American Midwest.
Larry Blake sent me the first two issues of this anthology series,
52-page black-and-white comics priced at $5 apiece.

Five Star Comics #1 features five stories of heroes believed to be
in the public domain - Moth Man, Silver Streak, Marvel Maid, Flip
Falcon and Cave Girl - and done in styles reminiscent of the 1940s
and 1950s.  My favorite of the bunch was Blake’s own “Yesterday and
Today,” which introduced Missile, the great-granddaughter of Silver
Streak, and kind of sort of teamed her up with her great-granddad.
It’s an interesting concept that carried over into the Missile tale
in the second issue.  That one was written by Terence Hanley with
pencil art by Blake and inks by Tim Corrigan.

Cave Girl also returns in Five Star Comics #2.  New/old characters
making their first appearances in that issue are the Black Bat, son
of the original, and Lady Luck, granddaughter of the hero that ran
in Will Eisner’s Spirit sections. Rounding out the line-up for the
second issue are the Amalga-Mates, cojoined super-heroes.  Though
I find it hard to believe Lady Luck was allowed to lapse into the
public domain, her story was my favorite in the issue.  Both story
and art are by Gary Gibeaut.

My specific quibble on the second issue revolves around the Amalga-
Mates.  Beside being pretty sure “Siamese twins” is now considered
an insensitive/offensive term, the story was poorly done and seemed
to mock its heroes.  The collective should be a bit more choosy in
what it publishes in this anthology.

My general quibble is what strikes me as an attitude that comics,
at least super-hero comics, stopped being fun half-a-century ago.
Old-time comics readers seem to embrace this idea with a religious
fervor, but it’s demonstrably erroneous.  There are plenty of fun
comics being published today if you’re willing to seek them out and
not insist they look and read exactly like the comics you read as
a kid.  Most of the characters in these two issues could have been
just as entertaining without the seeming insistence that they even
look like old comics.

I think many of my bloggy thing readers would enjoy these two comic
books.  Unfortunately, there’s no discernable way to order them on
the Internet.  You have to order them ($5 each postpaid) directly
from Blake.  His address is:

Blake also sent me Terence Hanley’s Lucky Girl #1.  I found the 28-
page black-and-white comic book charming.  Its title heroine is a
young girl whose power is...she’s incredibly lucky.  She uses this
gift to solve ground-level crimes.  This is Hanley’s first comic,
which inexperience probably explains why there’s no publishing info
in the issue or a price on its covers.  However, an inserted slip
of paper gives his website address and, if you go there, you’ll see
this issue costs $3 plus $2 for shipping and handling.  Take a look
at Hanley's website.

Archie’s Americana Vol. 3: Best of the 1960s [IDW; $24.99] gathers
together thirty stories from that pivotal decade in a full-color,
spiffy keen hardcover.  From fashion and folk singers to proms and
giving peace a chance, the collection encompasses some of Archie’s
best artists and most clever writers.  Unfortunately, there are no
creator credits given for these stories and that’s a shame because
many of those credits were available at the Grand Comics Database.
“Measure Up” from Archie #148 [August 1964) is said to have been a
favorite of the late Richard Goldwater, President and Publisher of
Archie Comics.  Checking the GCD, I learned it was written by Frank
Doyle, my all-time favorite Archie writer, with pencil art by the
great Harry Lucey and inks by Marty Epp. Editors and publishers of
classic material have an obligation to give credit where credit is
due.  It’s the right thing to do.

Comments to this bloggy thing have to be approved by me before they
appear.  I could try to explain my reasons for this in as nice and
diplomatic a fashion as possible.  Or I could just come out and say
it’s because I’m not going to give a voice to online jerks.  They
know who they are and you know who they are.

But your comments are important to me and I’m going to respond to
them within this and future bloggy things.  First up is a question
from hobbyfan who, after sharing his thoughts on Marvel’s Avengers
movie, asked: “Tony, if you were asked to write a screenplay based
on some of your comics work, what would be your preference?”
Good question.  While I’d love to see a high-quality movie of Black
Lightning - and shudder to think what liberties a filmmaker might
have to take to make it attractive for an audience that expects big
flashy spectacle and special effects from super-hero movies - I’m
not the guy to write that movie, though I would, of course, love to
be an adviser on it.  As a writer who has never even attempted a
screenplay, my possibly surprising choice would be...It the Living
Colossus!

Regular readers know my love for giant monster movies.  Even as a
first-timer, I think I could write an exciting film featuring all
sorts of Marvel monsters from the pre-hero days.  The hardest part
would be limiting the Colossus’ opponents to a manageable number.
There are a dozen Marvel monsters I would love to include, but too
many would turn such a movie into nothing more than a CGI slugfest.
Having thus revealed my secret desire, I eagerly await phone calls
from George Lucas, Steven Spielberg or Roger Corman.