LOVE LIVES IN THIS BLOG 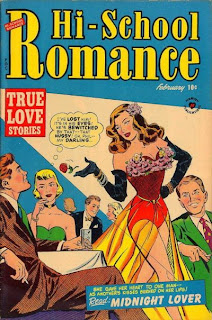 ﻿I have little to say about Hi-School Romance #13 [Harvey; February
1952], which hit the newsstands in my birth month of December 1951.
“Darling Phil” is bewitched by a rose-tossing hussy on the cover.
The artist of this cover has not yet been identified.

Inside the issue is what seems to be the usual Harvey romance mix
of comics stories and features.  The latter include hints on crafts
and fashion, love advice, text stories, and letters from readers on
their most romantic moments.

“A Marriage Made in Heaven” (6 pages)

Harvey must have taken a last shot at romance in the 1960s because
I recently came across two annual-size issues of Hi-School Romance
from that decade.  I suspect I’ll read and write about them in the
near future.

Also in the near future are more comics from my birth month, but I
will be changing that up on occasion with comics from several other
important months in my comics life.

Just not this weekend.

Some writer I am.  I can’t even begin to describe how much I love
my family...Barb, Eddie, Kelly, “other daughter” Giselle, our
wonderful friends and the fans of my work who have become friends.
Even with missing our away-at-college kids, I don’t think Barb and
I have ever been happier.  We’re always in each other’s corner and
we always have each other’s back.  Next month, we’ll celebrate our
28th wedding anniversary.

So many joys with Barb.  Sharing a quiet meal.  Juggling our crazy
schedules.  Even just kicking back and watching some TV.

I used to watch Desperate Housewives with Barb, but gave up on the
show after a few years.  Barb has only watching it sporadically for
many years.  But I watched most of the series finale with her and
we enjoyed it.

The stories of the main cast members were wrapped up nicely.  There
was also a bittersweet quality to the finale with the death of one
favorite supporting player and the realization these dear friends
were moving on.  It was sad, but very true to life.

My two favorite moments? Susan takes a final drive around the hood.
We see, dressed in white, those who had lived there and have passed
on, leaving a part of themselves behind.  That’s one.

Susan has a brief conversation with the woman who bought her house
and has just arrived to move in.  The woman seems skitterish as she
carries a mysterious box into the house and puts it in a secluded
cabinet.  It’s clear from this scene that, whether we are there to
see what happens or not, Wisteria Lane will continue to be a very
strange and dramatic place.

Later that week, Barb and I treated ourselves to an In Plain Sight
marathon of the show’s final four episodes.  No spoilers here, but
we were pleased with where the finale left Mary Shannon, Marshall
Mann and the rest of the cast.  With great characters and a strong
setting (The United States Federal Witness Protection Program), the
show was always entertaining and frequently thoughtful.  I’m happy
to see it go out so well.

Eddie, Kelly and Giselle have grown into amazing people.  Okay, we
can’t take the credit for Giselle, but we had something to do with
how the other two turned out.  I’m so darned proud of them I get a
little bit teary just thinking about them.

Oh, yeah, and I have a crazy cat named Simba who’s as friendly as
she can be without losing her feline street cred.  Most nights, she
sleeps where I sleep, cutting off circulation to my feet.  When I
am under the weather, she doesn’t leave my side.

Even with the expense of maintenance and renovation, what’s not to
love about our Tardis of a house?  Four levels, six bedrooms, great
kitchen open to our family room and more.

Our block is pretty spiffy as well.  My kids and their friends call
it “The 800 Block” and even have t-shirts with that name on them.
Lots of kids of varying ages and they’re all great kids.  Parents
who look out for their kids, the other kids, and their neighbors.

I love comics as much as I ever did and maybe more since there’s so
much more variety available to me.  My local library, allied with
100 area libraries, gets me just about everything I want to read.
I get a couple dozen review items a month.  I borrow a whole bunch
of comics from a generous friend.  Not to mention the thousands of
unread comics and books I own.  If print died tomorrow, I might not
notice until 2112.

I love that I’m not fixed on one kind of comic book.  I can enjoy
super-heroes, humor, manga and more.  It can be a chore reading a
few years worth of DC or Marvel comics at a time, but I still take
delight in coming across good stories and character bits.  I never
expect a comics series to be exactly what it was when I first read
it, but I’m good with variations on a theme when they stay true to
the core of the original series.

I love having a small-ish body of comics work that readers continue
to enjoy to this day.  Sure, I wish I were writing new comics and
I’m not giving up on that - a subject for another day’s bloggy
thing - but, bottom line, if I never write another comic book, I
still have accomplished so much more than the occasional online
louts who attempt to annoy me from time to time.  I’m good.

I’ll be back tomorrow with more love.