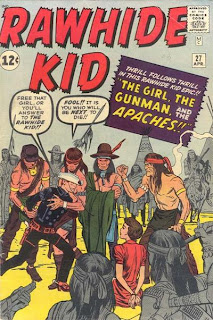 Jack Kirby’s cover for The Rawhide Kid #27 [April 1962] is a strong
one.  The Kid and the girl he would rescue are clearly in jeopardy.
The Dick Ayers inking gives a ruggedness to the scene that enhances
the scene.  The Stan Goldberg color scheme - the Kid, the girl and
several foes in full color and the rest of the Apaches in a solid
grey - adds to the sense of dread.  A fine cover.

Like previous issues, Rawhide Kid #27 has three tales starring the
title hero and a non-character anthology story.  Rawhide wouldn’t
get a longer adventure until issues #32, the last issue featuring
Jack Kirby’s interior art on the character.

Even with the reduced page counts for these stories, Stan Lee does
some first-rate writing.  How much Kirby had to do with plotting is
an unknown and unknowable thing.  With stories this short, I can’t
imagine the plots were too loose or too tight.  Like I said, no one
can say for sure.

“When Six-Guns Roar!” (7 pages) has a terrific supporting character
in big Peaceable Morgan, the bearded owner of the Bar-M ranch.  He
gives the Kid a job despite his reputation...on the condition the
Kid hands over his guns.  When other ranch hands think this makes
the Kid fair game for bullying, they learn otherwise from the Kid
and from Peaceable Morgan.

The usual way situations like this would work out for the Kid would
have Morgan being a bad guy tricking the Kid into participating in
some crime.  Not in this story.  Morgan’s a genuinely good man and
it’s his foreman who’s in cahoots with the Bolton Gang.  When the
Gang raids the ranch, it’s the Kid who takes them down and receives
the accolades of the cowboys who’d been against his being hired by
Morgan.  Here’s where logic takes a hike in order to maintain the
status quo of the Kid always on the road.

The Kid has an honest job with a boss and fellow workers who like
and respect him.  He’s happy there...and leaves anyway.  Maybe he
thought his presence would bring more trouble to the Mar-M or that
the law would come after him there, but he never expresses either
concern.  He just leaves what looked like a pretty good situation
for him.  Go figure.

Lee, Kirby and Ayers pack a whole bunch of action into the six-age
“The Girl, the Gunman, and the Apaches!” The Kid warns the family
of settlers in a solitary wagon that they traveling through an area
“crawlin’ with Apaches!”

Rawhide spots the “Apache attack signal,” which consists of three
clouds of smoke.  Building a fire to send smoke signals seems like
an unnecessary effort to me when you could just use a hand signal
or shout “Go get ‘em!”

The Kid drives off the Apache raiders, but not before Red Wolf (or
Red Wolfe as he is called in one panel) grabs the lovely daughter
of the driver and makes off with her.  The family wants to go after
her, but Rawhide claims that mission for himself.

Challenging Red Wolf to a duel for the young woman, the Kid beats
the Apache in a fistfight.  In all fairness, the Apache is somewhat
distracted by the “legend” of the Rawhide Kid.  The tribe’s chief
is as good as his word and lets the Kid and the young woman leave.

Red Wolf and a few braves aren’t as honorable.  They go after them.
Sending the young woman ahead, the Kid uses his gun to stampede a
buffalo herd.  Red Wolf and company haul ass out of there.

Lack of logic again rears its head in the final panels of the tale.
The Kid doesn’t take the woman all the way back to her family.  He
leaves her where he reckons she can ride safely back to them.  He
is taken with her, but thinks:

“I’ve got to go now! Before I tell her how beautiful she is —- how
I admire her courage! An owlhoot like me got no right expectin’ to
court a girl like her!”

“What a schmuck! He can’t ride with me a few more minutes to make
sure that future member of the Village People doesn’t turn around
and kidnap me again?!”

I’m kidding.  What she really thinks is:

“If only he’s turn back! If only he’s stay! But I can’t expect a
famous western adventurer like him to give a second thought to a
nobody like me!  He’ll never know it, but I’ll always love him!”

Next is “The Fury of Bull Barker” (five pages), a non-series story
by Stan Lee and Don Heck.  This is one of my favorite of the non-
series stories.  Rough-and-tumble Bull Barker is enamored of lovely
Nancy Carter, but neither she nor her dad want the big lug to come
a’courting.  Barker is a good man.  He’s got his own spread and he
has money in the bank.  But he lacks refinement.

Enter Frank Hilton, referred to the Carters by Nancy’s brother.  He
seeks a job while he’s studying the law.  He’s a handsome man with
manners and a sense of style.  I hated him at “studying the law,”
but Nancy is impressed. Bull keeps trying, but to no avail.

At the town’s monthly square dance, Bull asks Nancy politely if he
can have a dance.  Since Barker asked so nicely, Nancy agrees and
that’s when Hilton gets all up in Bull’s grill.  When Bull doesn’t
back down, Hilton draws a gun on the man.  When Bull shows no fear,
Hilton shoots him in the arm.  That just makes Bull mad.

With one arm, Bull knocks the gun out of Hilton’s hand and starts
to punching on him.  It’s seven panels of gripping action and every
bit as effectively staged by Heck as if it had been drawn by Kirby.
Nancy reevaluates her romantic choices.

In the last panel of the story, we see a wedding: “And so they were
married! That’s right! Bull and Nancy!  Surprised? Why? After all,
there’s no law that says the rough and tumble character without the
college education never gets the girl, is there?”

One more note.  There were names Stan used over again in these and
other stories.  Barker was one of those names. There was an Atlas
war comics character called Sgt. Barney Baxter.  There were thugs
named Barker in two western stories before this one and in one or
two afterwards.

But “Nancy Carter” is the name that really caught my attention in
this story.  Around six months later, Lee and Kirby would restart
Two Gun Kid.  This time, the Kid was the masked identity of lawyer
Matt Hawk and the hero’s romantic interest was schoolteacher Nancy
Carter.  I hope Bull never found out.

There’s more than a wee bit of craziness in “The Man Who Caught the
Kid” (five pages), the third Rawhide Kid story of the issue.  The
Rawhide Kid is on the run for a posse and this isn’t one of those
dumb posses.  They are good.  The Kid is just better, fooling them
with a posed rifle.

Rawhide is practically home free when he spots a creep beating his
horse...and that’s not a euphemism for anything, you guttersnipes.
The Kid is almost at the border, but he turns around to rescue the
house from its brutal owner because, as we all know, there “ain’t
nothin’ lower than a man who beats a helpless animal!”

By the time Rawhide is finished educating the horse owner, he has
been surrounded by the posse.  The Kid reckons the lawman has got
him fair now.  The lawmen agrees and then says:

“But it seems to me that my job is to bring in outlaws!  Badmen!
You coulda gunned us down before son, but you didn’t!

“And you gave up yore chance for freedom to save the life of that
coyote’s hoss! In my book, Kid, he’s the badman...not you!

“So we both win out!! I’m bringin’ back a prisoner...and you, you
still got some ridin’ to do to reach that border!

“I don’t reckon it matters what label a hombre wears!  No matter
what they call ‘im, we’re watchin’ a man ride off!”

I wish I could describe the hilarious scene in which the lawman has
to explain this turn of events to his boss, but I’ve still got some
ridin’ of my own to do to reach that border.