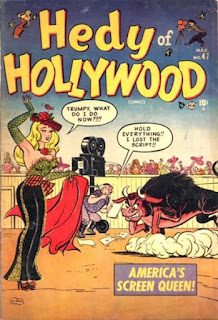 ﻿Though the cover of Hedy of Hollywood #47, which hit the newsstands
in my birth month of December 1951, proclaims the title heroine to
be “America’s Screen Queen,” I’m not buying it.  I did a search at
the Internet Movie Datebase and couldn’t find even a single acting
credit for her.  Nor were there credits for her director Trumpetski
or co-star Sandra the Star.  If you can’t believe what you read in
comic books...

There’s not much I can tell you about this issue.  The Grand
Comics Database only has the cover.  Atlas Tales had
a little more info, but not much.  Here’s what I have...

There were at least four stories in the issue, two of them starring
Hedy DeVine.  One story stars her director Trumpetski, who sort of
reminds me of Don DeLuise from Blazing Saddles.  The fourth story
stars Sandra the Star.  Ed Winiarski drew the cover and maybe all
of the inside stories.  Stan Lee wrote most and maybe all of them.
That’s all I got.

As always, I am eager to be enlightened by any bloggy thing readers
who know more about Hedy De Vine than I do.  Look for more covers
from my birth month in the weeks and months to come.

I’ll be back tomorrow with a full-sized bloggy thing.