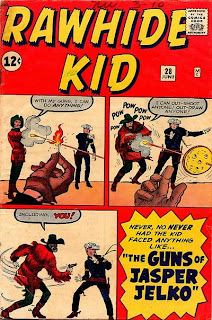 The Rawhide Kid #28 [June 1962] has another of the multiple-panels
covers that occasionally appeared on the Marvel covers of the early
1960s.  Since there was also one on issue #24 [October 1961], I’m
guessing they must have sold well.  Jack Kirby drew most and maybe
all of them from this period and did them with his usual senses of
action and drama.  This cover, like the earlier Rawhide Kid cover,
was inked by Dick Ayers.  Editor Stan Lee likely wrote the dialogue
here and probably for most Marvel covers.

Lee, Kirby and Ayers teamed for the three short Rawhide Kid stories
in this issue.  Short of some hitherto undiscovered files turning
up, we may never know how closely Lee and Kirby collaborated on the
plots or if they collaborated at all.  I think it’s likely they did
collaborate on them.

“Doom in the Desert” (7 pages) packs a lot into its short length.
Rawhide wins a shooting contest and donates most of the winnings to
the widow of a deputy sheriff he once road with.  Spotted by would-
be bounty hunters, the Kid must flee into the unrelenting desert
where he is robbed by the truly vile Luke Gorby and left for dead.
Rescued by Gorby’s sister, who had no idea of her brother’s crimes,
Rawhide spares Gorby for her sake.  But the cowardly Gorby doesn’t
believe the Kid will let him live and flees into the desert without
water.  A storm prevents Rawhide and Gorby’s sister from following
Gorby.  “Perhaps it’s better this way,” his sister says, “He’ll die
as he lived...and not one will care...no one will remember...except
me!” Pretty gloomy.

Perhaps experiencing a moment of self-reflection, the Kid doesn’t
offer much comfort: “In time, you too will forget! For a man such
as Luke leaves nothing behind to remember, nothing except sorrow,
and the emptiness of a wasted life!”

Some signs of the emerging Marvel Universe here.  At the bottom of
page three of the story:

At the top of page six:

Who is the Hulk??

“The Guns of Jasker Jelko” (6 pages) is the weakest of the issue’s
three Rawhide Kid tales. The Kid hides from lawmen at a carnival.
Star attraction Jelko - his first name is misspelled on the cover -
is a bully and a thief.  Rawhide catches him robbing the carnival
and outguns him. The best thing about it is the gag at the end of
the story as the Kid walks away into the distance.

SLIM: Say, Sheriff! There’s the hombre who caught Jelko!  There’s
only one gun in the West could beat Jelko! And that’s...
SHERIFF: Yeah! I know, but he ain’t the one!

SLIM: How can you be sure?

At the bottom of page two:

The Hulk is coming!

At the top of page four:

What is the Hulk?

At the bottom of page six:

You’ve never read a comic like “The Fantastic Four”! Get your
spine-tingling copy today!

Next up is the non-series story: “The Silent Gunman” (5 pages) by
Stan Lee and Paul Reinman.  It’s even weaker than the Jasker Jelko
story. Saloon. Bullying gunman. Calls out quiet guy at bar.  Can’t
figure out why quiet guy isn’t scared of him.  Stars wondering who
the guy is.  Turns tail and runs.  The quiet guy is a gambler and,
just like in poker, he was bluffing.

Speaking of non-series stories: I’m not 100% convinced that issue
#26's “Strong-Man” was written by Stan Lee.  The more I think about
it, the more I think it’s possible the Stan Lee vibe in that story
comes from the editing thereof.  It’s just a gut feeling, but that
feeling and the fact that Stan’s credit doesn’t appear on the story
has me thinking.

Back to this issue...

“When a Gunslinger Gets Mad” (5 pages) is the final Rawhide story
in the issue.  It’‘s hilarious.  The Kid orders milk in a saloon.
Bullies get in his face.  Brawl breaks out and Rawhide mops up the
floor with the creeps.  Cut to “a short time later” when a cowboy
comes in for a drink in the trashed establishment.

BARKEEP: What kind of drink?

The barkeep punches the cowboy in the face.

BARKEEP: That’s what I thought you said!

The barkeep pours a glass of milk.

BARKEEP: Rotgut is for pipsqueaks!  We only serve men here!

Seated at what may be the only chair and table left standing, the
Kid thanks the barkeep for the milk.

What is the Hulk??

Me? I wonder if people really asked for “rotgut” in the Old West or
anywhere else.  Was it a brand name?  If it wasn’t, it should be.
Maybe there should also be a Diet Rotgut for when you want to get
really sick without gaining weight.

I’ll be back next Wednesday with more rollicking Rawhide hilarity.
I’ll be back tomorrow with other stuff.