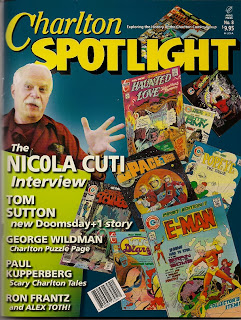 New York City has long been considered the city of comic books and
with good reason.  However, two other cities are also noteworthy in
the history of the American comic book.  One, of course, is Sparta,
Illinois where the majority of comic books were printed for several
decades.  The other is Derby, Connecticut.

Derby was the home of Charlton Comics.  Despite being known for its
low rates and poor production values, despite existing to keep the
parent company presses rolling in between magazine runs, Charlton
published a whole lot of comic books and, within those many comic
books, quite a few good and even great comic books.

Charlton Spotlight [Argo Press; $9.95] explores the history of that
plucky little comics outfit from Derby.  Edited by Michael Ambrose,
the magazine has just released its eighth issue.  Its 56 pages are
filled with Charlton lore and more.

The cover feature is a long interview with writer and editor Nicola
Cuti, co-creator of E-Man and one of the great unsung comics men of
the 1970s and beyond.  Cuti talks about working at Charlton and the
talents whose paths he crossed: Wally Wood, Joe Gill, Bill Pearson,
Steve Ditko, George Wildman, Joe Staton, Wayne Howard, Sanho Kim,
Pat Boyette, Don Newton, Mike Zeck and others.  It’s an informative
interview and Nick’s friendly, thoughtful nature shines through in
every page of it.

Charlton Spotlight #8 also features an unpublished Doomsday+1 tale
written and drawn by Tom Sutton, Paul Kupperberg on the handful of
stories he wrote for Charlton and Ron Frantz on his friendship with
the legendary Alex Toth.

Charlton Spotlight is available through Diamond Comic Distributors
and here’s the ordering numbers on the most recent issues...

If you can’t get these fine issues through your regular supplier,
contact Michael directly at the Charlton Spotlight site.  I’m a big
fan of the magazine and I think you’ll enjoy it, too.

I read Captain America #4-12 [Marvel; $3.99 per issue) recently and
enjoyed the issues.  Cap has been trapped in Dimension Z for over
a decade, the prisoner of Arnim Zola.  During the first ten issues
by Rick Remender with artists John Romita Jr. and Klaus Janson,
he’s been experimented on, escaped, defended the natural denizens
of the dimension, kidnaped/raised Zola’s son, met/fought Jet Black
(Zola’s daughter) and taken more punishment than I would’ve thought
even a super-soldier could survive.  It was a thrilling serial with
Cap battling to prevent Zola from turning “our” world into a world
of his clones.  The writing was great, the dynamic art was furious
and breathtaking.  Indeed, the only bump in the exciting road was
the seeming gratuitous death of a supporting character from “our”
world.  For reasons I won’t mention, I have no doubt the character
has somehow survived and will return, but the death struck me as
cheap shock value.

Cap and Jet Black are back on our world as of issue #11 and Carlos
Pacheco has replaced Romita Jr. as penciller.  Though only a short
time has passed on “our” world, Cap lived every one of those dozen
years in Dimension Z.  He’s more of a man out of time than ever as
he attempts to adjust to being back in his old life and to helping
Jet adjust to what is, for her, a brand new world.  I haven’t seen
evidence of his ordeal in any of the other Marvel titles he appears
in, but that doesn’t bother me.  I treat each and every Marvel book
as if it takes place in its own universe.  Please don’t hate me for
not wanting to deal with confusing continuity.

Nuke (from the classic “Born Again” arc of Daredevil) appears to be
the next big bad for Cap.  I’m looking forward to seeing how that
conflict plays out.

Doctor Strange: From the Marvel Vault #1 [$2.99] was published in
2011.  But this Roger Stern story was originally plotted in 1998.
It was pencilled by Neil Vokes and inked by Jay Geldhof, but never
scripted until twelve years later.  Already, this gives the issue
a certain coolness for me.

“This Old House” is set earlier in Stephen Strange’s career as the
master of the mystic arts.  It’s the tale of how he found the house
he has lived in since then and how he kind of sort of “tamed” it.
It’s almost like a Marvel Universe version of HGTV’s House Hunters
but with more supernatural menace.  I got a kick out of it.  It’s
worth hunting down in the back issue bins.

Over the decades, Marvel was published a lot of interesting one-off
stories.  Fill-in issues that were as good or better than a book’s
regular issues.  Guest stories by unexpected writers and artists.
Maybe it’s time for a  series of Marvel One-Shot Wonders books
that would reprint these forgotten gems.  I’d buy it.

Another candidate for Marvel One-Shot Wonders would be Incredible
Hulk #82 [August 2005].  In “Dear Tricia” by Peter David with art
by Jae Lee, Bruce Banner meets a minor sorceress minutes before her
murder in an exploding car.  In astral form, she asks him to find
her killer before her spirit dissipates so she can rest in peace.
It’s a brilliantly told tale with an ending that will stick to your
soul long after you’ve finished the story.  Like that Doc Strange
one-shot, it’s worth seeking out.

I’m still running a year behind on the Batman titles and just read
Batman Incorporated #0 [November 2012].  It’s a not unpleasant tale
of the start of the organization.  The story is credited to Chris
Burnham and Grand Morrison and the script to Morrison.  The art is
by Frazier Irving.  Morrison delivers a decent enough script with
some humorous bits.  Irving, whose work I generally like, appears
very much out of place with the material.

Quoting: “But rarely is anything quite what it seems when it comes
to Batman’s strategies, and soon it was revealed that Batman Inc.
was part of a much larger campaign...one against Talia al Ghul and
her counter-organization, the destructive force known as Leviathan.
A war is coming between Batman and Talia, with Batman Inc. and
Leviathan as their armies.”

BAM! We’re back into “Batman is a colossal dick” territory with the
revelation that Batman wasn’t creating heroes.  He was recruiting
unwitting soldiers for his ex-lovers war with Talia.  What a waste
of a great concept!

If Talia is a threat of global proportions, why doesn’t Bats call
in the Justice League and all the other existing heroes he’s worked
with in the past?  Take her off the map once and for all.  Move on
to the next threat.

But, no, DC’s Batman is an obsessive dick who’s not interested in
actually making the world a better place.  He’s only interested in
working out his issues as he sees fit and at considerable risk to
those around him.  What a wanker!

Other media has managed to portray Batman was something other than
a dick, at least on occasion.  Other media has portrayed him as an
actual hero and not a deranged sociopath.  But DC’s default setting
on the character always appears to be “colossal dick.”

Posted by Tony Isabella at 2:36 AM