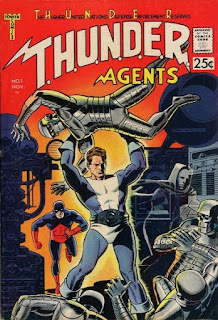 Comic Book Resources ran one of its typical click-bait lists a few weeks back: 15 Defunct Comic Book Publishers. Around the same time, comics writer Gail Simone asked her Facebook and Twitter followers to name their favorite defunct comic-book publishers. I thought it was an interesting question and filed it away for further thought. Here’s what I came up with...

Looking at the CBR list, I dismissed almost all the site’s choices immediately. I realized I felt no particular sense of loss for the publishers who had operated before I became a comics fan or after I had become a comics professional.

I revere EC Comics, but I own their comics in hardcover reprints. Some of the attempts to continue those anthology titles have been interesting. Some have not. The caption-heavy style of EC’s finest stories isn’t a style I would want to emulate today. And EC’s most successful and sustainable title - MAD - is still being published today and is still an enjoyable magazine.

Quality Comics? Even though I kind of sort of collect old Quality titles like Kathy and The Barker, most of Quality’s better heroes ended up at DC Comics. Those heroes haven’t always been done well at DC, but DC gets points for effort.

Fawcett’s main legacy is Captain Marvel and the Marvel Family, who are also owned by DC Comics. Those heroes have sometimes done well at DC and sometimes not. I don’t feel any real longing for Fawcett and feel absolutely none for Fox Comics with its mostly cheap-ass production philosophy.

Harvey Comics almost made my list because I have these sick urge to re-imagine all those weird Harvey cartoon characters as villains. I feel the same way about the cast of the Peanuts newspaper strip. That said, I wouldn’t mind trying my hand at Richie Rich - I would do political and social satire - or such Hollywood-based heroes as Stuntman and the Black Cat.

CBR’s choices that came and went after I became a professional were WildStorm, Awesome, Eclipse, Caliber, Comico, Pacific, Defiant and Malibu. Some of those companies published some excellent comic-book series, but my fondness is for individual titles and not for these outfits as a whole.

When Tower Comics launched T.H.U.N.D.E.R. Agents #1 in 1965, I was a full-fledged Marvel fan. I still read some comics from DC, Gold Key and other publishers, but T.H.U.N.D.E.R. Agents was one of the few super-hero titles that excited me as much as the Marvel books. Created and spearheaded by Wally Wood, characters like Dynamo and Noman thrilled me. The 25-cent, 64-page comic books offered story after story with amazing heroes, villains and artists. By 1965, I could recognize the styles of beloved artists, so it was thrilling to see work by Reed Crandall, Steve Ditko, Ogden Whitney, Gil Kane and others. I was thrown by Manny Stallman’s work on “The Raven,” but, in retrospect, it was pretty cool material.

When one of the T.H.U.N.D.E.R. Agents died to save his teammates, it was a shocking moment. Yet the seriousness of that classic tale of heroism did not prevent other stories from exploring the humor of various characters. I bought every T.H.U.N.D.E.R.-related title, as well as Fight the Enemy and Undersea Agent. I didn’t buy Tippy Teen or any of her spin-off titles, but now wish I had. I may have to start searching for those at conventions.

Counting a few mass market paperback collections, Tower published 85 issues before closing shop in 1969. Though the T.H.U.N.D.E.R. Agents have been revived by more than a few other publishers over the years, none of the versions has captured the excitement of the original run. In a world where money was no object for me, I would happily buy all 85 of those original issues. 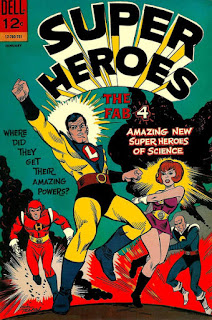 When I talk about Dell Comics, I’m talking about that publisher’s efforts after its 1962 split with Western Publishing. Since 1938, Dell had financed and distributed comic books produced by Western. Western held all the lucrative licenses - Disney and Warner Bros. and many others - so the dissolution of their business arrangement left Dell without its bestselling titles.

While most of the talent who had worked on the Dell line continued at Gold Key, a few creators like John Stanley stuck with Dell and its new line. Dell also drew new talent to its fold, such as Frank Springer, Don Arneson, and Lionel Ziprin.

Dell Comics continued for another 11 years with licensed television and motion picture adaptations, including Mission: Impossible, Ben Casey, Burke's Law, Doctor Kildare, Beach Blanket Bingo and a few generally poorly received original titles. The few long lasting series from this time include the teen-comic Thirteen Going on Eighteen (written by John Stanley), Ghost Stories (with only the first written by Stanley), Combat, Ponytail, Kona Monarch of Monster Isle, Toka the Jungle King and Naza Stone Age Warrior. Dell additionally attempted to do superhero titles, including Nukla, Superheroes (starring the Fab 4, as the group's name was spelled on covers), Brain Boy, and a critically ridiculed trio of titles based on Universal Pictures monsters Frankenstein, Dracula and Werewolf that recast the characters as superheroes.

As a teenager, I got the impression Dell would throw any comic book against the wall to see if it would stick. Their crazy super-hero comics had an odd attraction for me. We should also remember that it was Dell who published two issues of the western comic Lobo, the first comic book to star an African-American hero. Lobo was killed by the racism of the marketplace, but it was a noble effort worthy of our respect.

I didn’t buy many Dell comics after the company split with Western, but I picked up issues here and there when I had a few extra bucks in my pocket and do so today when I find good condition copies at a decent price. I’ll be looking for more of them at this year’s conventions. 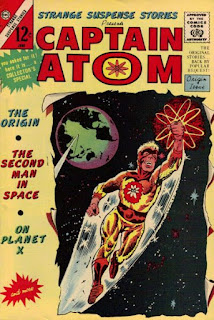 Charlton would have ranked high on my list just for publishing its ongoing Gorgo, Konga and Reptilicus/Reptisaurus titles. But there was so much more from the company, based in Derby, Connecticut and known for paying some of the lowest rates in the comics industry. Wikipedia offers this historical information:

In 1931, Italian immigrant John Santangelo, Sr., a bricklayer who had started a construction business in White Plains, New York, five years earlier, began what became a highly successfully business publishing song-lyric magazines out of nearby Yonkers, New York. Operating in violation of copyright laws, however, he was sentenced in 1934 to a year and a day at New Haven County Jail in New Haven, Connecticut, near Derby, Connecticut where he and his wife by then lived. In jail, he met Waterbury, Connecticut, attorney Ed Levy, with whom he began legitimate publishing in 1935, acquiring permissions to reproduce lyrics in such magazines as Hit Parade and Song Hits. Santangelo and Levy opened a printing plant in Waterbury the following year, and in 1940 founded the T.W.O. Charles Company, named after each of the co-founders' sons, both named Charles, eventually moving its headquarters to Derby.

It has long been opined that Charlton published comic books to keep its printing presses running 24/7. The quality of that printing was less than good, but that didn’t stop me and lots of other kids from buying Charlton comics. You see, Charlton published every kind of comic there was: crime, funny animal, horror/monster, kid humor, nurses, romance, science fiction, teen humor, war, western and even  hot rod comics. Something for every reader.

The first Charlton books I bought were Gorgo and Konga, the first because I loved the movie on which it was based, the second because it couldn’t possibly be as bad as the movie on which it based and because I was drawn to the Steve Ditko art. As my income increased, I bought Charlton’s action heroes and horror comics and war comics and western comics. Low rates or not, there were a lot of terrific characters and creators in those comics. These days, I pick up the odd Charlton book here and there while actively collecting Gorgo, Konga, Reptilicus/Reptisaurus and Nurse Betsy Crane. 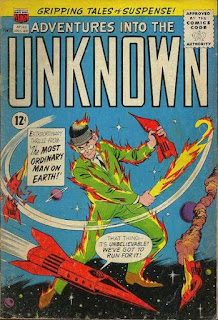 The American Comics Group always seemed like a small local business to me. When I reading their comic books in the 1960s, there were only four ACG titles: Adventures into the Unknown, Forbidden Worlds, Unknown Worlds and Herbie. Almost every story and maybe every story in those issues was written by editor Robert E. Hughes utilizing a variety of aliases. The “voice” of Hughes was also evident in the letters page where he was never afraid to challenge readers if he felt they didn’t appreciate a story he thought was great or praised a story he felt was one of his weaker efforts. He even faced down trolls who wrote insulting letters to his comics. Yes, there were trolls back then. He just didn’t call them that.

Hughes also had a knack for making average and even mild-mannered characters the heroes of his stories. I never got tired of seeing some put-upon schlemiel rise up to a challenge and change his life for the better. As veteran readers of my work know, I’m a sucker for a good redemption tale.

A few years before ACG went out of the newsstand comics business in 1967, Hughes gave into the TV-inspired super-hero craze and created super-heroes to headline Adventures into the Unknown and Forbidden Worlds. Admittedly, Nemesis and Magicman were somewhat crazed, but Hughes was trying to bring in some new readers without alienating his fantasy and science-fiction-loving readers. He might not have succeeded, but I remember those characters fondly. They are among a relative handful of existing characters I would be interested in writing today.

Of late, I’ve been enjoying the PS Artbooks hardcover collections of Adventures into the Unknown and Forbidden Worlds. They’re great fun with most of the stories holding up pretty well.

ACG is on the top of my list because I miss that “small business” aura of their titles. Even in our modern era, where there are many such small comics businesses producing comics. ACG seems special to me. It was a special company.

That’s my list of my favorite defunct comics publishers. Sometime later today, I’ll be driving to Lansing Michigan for the weekend’s  FantastiCon.

I won’t be posting new bloggy things while I’m on the road, but I will be back on Monday with more stuff. See you then.