Besides my own beloved self, the Fantasticon guest lists includes Misty Knight co-creator Arvell Jones, comics artist Jason Moore, the comics legend who am William Messner-Loebs, comics artist Scott Rosema, actor/singer/activist Eugene Clark, makeup special effects artist Daniel Phillips, sketch and tattoo artist B.C. Hepner, Tugg the Superhero Dog and Midwest Droid Builders. I believe those are the droids you were looking for. The show’s artists alley will have over a dozen participants and the vendors area will have over two dozen sellers of fine and wondrous items.

Panels and events will include nerd trivia, musicals, two cosplay contests, droid building, makeup special effects. Arvell and I will be doing a panel on Saturday at 2:30 pm:

This panel will be fun because Arvell and I remember the creation of Misty Knight in significantly different ways. Which is all good on account of we love each other like brothers. Fans who come to our panel can ask us about other characters and comics, too. No comics fans will be harmed during this presentation. Maybe.

I’m particularly excited about the convention’s cosplay contests. This will be the first convention where I’m handing out my sure-to-be-esteemed CERTIFICATE OF COSPLAY while giving qualifying costume players an actual American dollar bill for their efforts.

I have a list of cosplay I’d like to see at my 2017 appearances.  Many are characters that I created or co-created (Black Lightning, Misty Knight and Tigra). Others will be characters I wrote, such as Hawkman, Hawkwoman, the Johnny Blaze Ghost Rider and others. Some will just be characters I love like the Blonde Phantom, Cosmo the Merry Martian, Herbie Popnecker, the original Sugar and Spike, the classic Zatanna, Mademoiselle Marie, and others. If you come to my convention booth/table cosplaying as these characters, I will give you a dollar and a special certificate.

The certificate? It’s a thing of beauty that I will be unveiling at Fantasticon Lansing.

Now that I’ve written it down, it sounds like I’m the kid who could only get a dog to play with him by tying a burger around my neck. But I’m willing to come off as pathetic to see some great cosplay. If it works, it’ll be grand fun. If it doesn’t work, well, it won’t be the first time a plan of mine went awry.

Feel free to spread this bloggy thing cosplay contest all over the Internet. Just this weekend, I bought a new phone that will allow me to take decent photos of the cosplayers who visit my table. You best believe I will share them with my readers here and elsewhere.

At my convention table/booth...

I will be selling the Black Lightning trade paperback reprinting my first series as well as other Isabella-written items. On request, I will sign these and other Isabella stuff. There will be no charge for my signature or, for the most part, any limit on how many items I will sign for you. However, in the unlikely situation in which I have a line of folks waiting for my signature and you have a large stack of things for me to sign, I’ll sign a few items for you and ask you to step to the back of the line until I’ve signed for the other people in the line. I’ll do my best to make sure everyone who wants signatures gets them as quickly as possible.

I’ll be selling other things as well, but I never know what those things will be. There’s an excellent chance I’ll have two boxes of recent comic books priced at just a dollar apiece. There will be a few surprises in those boxes.

Other possibilities include: the 1988 two-sided Superman poster I have been selling at other conventions, a box of trade paperbacks and hardcovers priced at two and five dollars each, and maybe some other stuff. What I have depends on how much time I have to prepare stuff for the convention in between finishing some writing things for various clients.

While I’m at my table, I’ll be happy to answer your questions about comics and my career in comics. However, keep in mind that, due to agreements I’ve signed, I might not be able to answer all of your questions at this time. I’ll answer what I can.

While I’m not at my table, I’ll be chatting with friends and making my way around the vendors areas. Among the comics I’ll be looking for are issues of Charlton’s Nurse Betsy Crane, Marvel’s Kathy and The Mighty Marvel Western. If you have any Alan Class reprints from England or other interesting British comics - and if I’m making a few bucks at my table - I might buy some of those. 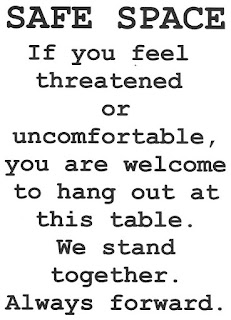 Having been to one of Joe Nieporte’s shows before, I can’t imagine anyone there could feel threatened or uncomfortable. But, if you do, feel free to hang out around my table for as long as you need to. My table should always be considered a safe space for fans and pros alike. We are always stronger together.