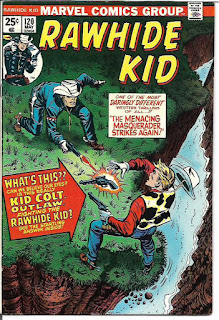 The Rawhide Kid is my favorite western comics character and one of my favorite comics characters period.  Something about the short of stature - but big on courage, honor and fighting skills - Johnny Clay speaks to me.  After rereading the Kid’s earliest adventures when Marvel reprinted them in a pair of Marvel Masterworks and an Essential Rawhide Kid volume, I wanted to reacquire every Rawhide Kid comic, reread them and write about them in this bloggy thing of mine. We’re currently in the extended twilight of the title. We’ve seen the last new Rawhide Kid story that will appear in the title, which is now a bimonthly. This is the 107th installment in my “Rawhide Kid Wednesday” series.

The Rawhide Kid #120 [May 1974] reprints “The Menacing Masquerader Strikes Again!” from issue #50 [February 1966]. The original cover was by Larry Lieber with inks by Carl Hubbell. This issue’s version of that cover was heavily retouched by John Romita, showing more of Kid Colt’s face, adding extra weight to the figures of both kids, and adding detail to the background. The original cover copy gets moved around a bit in the process. 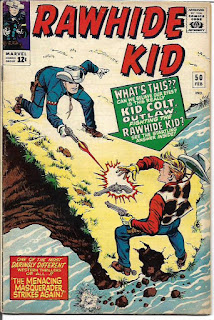 The Rawhide Kid story was written and drawn by Lieber with inks by Hubbell. The original 17-page story was cut down to 15 pages here. Former Marvel writer and editor Scott Edelman discussed the cutting of pages - my least favorite job when I had to do it - in his own blog. You can read his remarks here...and you can read my previous comments on the uncut story here.

Whoever cut the original story by two pages kept the first panel of page 9 intact, but replaced the second panel with the sixth panel. The editor - more likely, an assistant editor - rewrote the sixth panel copy to make the truncated reprint flow better. The original second panel was cut along with panels three, four, five and seven. The first two panels of page 10 were also cut. If this sounds like a lot of production work, it’s because it was a lot of production work. I’ll get back to that in a bit.

Four pages of the original story were edited and spliced together to eliminate two pages from the page count. This was done to make room for a four-page second story. Unfortunately, there weren’t a lot of two-page western stories available. Almost none, in fact. It would’ve been relatively simple to find a three-page story from the 1950s - they were common - but Marvel needed to make room for its annual “Statement of Management, Ownership and Circulation.” That statement only took up a third of a page with two third-of-a-page house ads filling the rest of the space. We’ll talk about that in a bit.

My own solution to the page count problem would have cost Marvel a few bucks, but saved the production work on the lead story. I would have filled the remaining two pages of editorial content with pin-ups of the Rawhide Kid and Kid Colt in the style of Fantastic Four Annual #1's “Gallery of the Fantastic Four's Most Famous Foes!” During my time as editor of Marvel’s British weeklies, which were prepared in our New York offices, we did some pages like that...and they were relatively fast and inexpensive to produce.

My suggestion was not approved. No one wanted to expend much effort on Marvel’s reprint books, even though my solution would have eased the load of our always overworked production department. I can see why my suggestion was nixed, but I always felt we could and should have done a better job on the reprint titles. Those comics cost the same quarter as our original material titles. 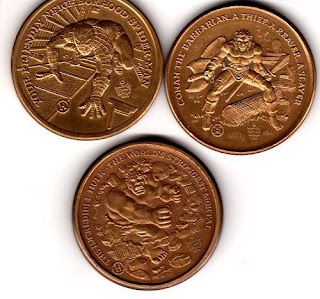 In this issue, Hallmark Minting Service had a full-page ad for “The Big Three.” These were the “official Marvel solid-bronze collectors medallion-coins” featuring Spider-Man, the Hulk, and Conan. Each of the coins was one-of-a-kind with its own mint serial number. Each cost $2.50 with postage and handling adding another sixty cents to the total. The ad also offered various holders:

This issue’s Marvel Bullpen Bulletins page featured “Roy’s Rostrum” with editor-in-chief Roy Thomas filling in for the globetrotting Stan Lee. Roy mentions new magazines Crazy and The Deadly Hands of Kung Fu, both edited or associate edited by Marv Wolfman. He says there will be more on the latter title on the Bullpen Bonus Page. Which doesn’t appear in this issue. However, there is a half-page house ad for Deadly Hands several pages down the line.

Roy gives shout-outs to secretary and proofreader Carla Joseph, assistant editors Don McGregor and Doug Moench, and some freelance writers who were considered contributing editors. I’m listed with the latter since this was written during the brief time I had left staff and before I returned to take over the editorship of several of the black-and-white titles.

Marvel would be doing a full-color comics adaptation of The Golden Voyage of Sinbad movie. It ran in Worlds Unknown #7 [June 1974} as adapted by Len Wein and George Tuska.

Mike Ploog was the new artist on Man-Thing.

Don McGregor and Herb Trimpe revealed what happened to the missing Watergate tapes in their new “War of the Worlds” story for Amazing Adventures.

There was also a special Marvel shout-out to Vincente Alcazar, the fine Spanish artist sent to us by Neal Adams. I liked Vincente and his art, so I was thrilled when he was assigned the Man-Thing story I wrote for Monsters Unleashed. Just don’t ask me why I wrote that story instead of Steve Gerber. Because I don’t remember.

The final item was another FOOM code message. It concerns another new Marvel 75-cent magazine that would be published in the spring. The secret was in two words: LIDG ALZO

I’m going to take a wild stab and say that code message translates to “Iron Fist.” However, since the character was appearing for the first time in this month’s issue of Marvel Premiere, that seems way premature to me. Maybe Marvel just meant the character would make appearances in The Deadly Hands of Kung Fu, as he eventually did.

The “Mighty Marvel Checklist” had 24 different titles on it. Among them was Sgt. Fury #119 with the second last new Fury adventure to appear. The next issue would have the last new story, though Fury would continue for several years as an all-reprint title.

The last thing on the page was a small hand-lettered, text-only house ad:

This is the month of MARVEL GIANT-SIZE SUPER-STARS! See our awesome ads for details! A magnificent new comic-mag from Mighty Marvel! 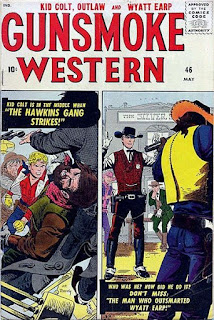 “His Back to the Wall!” (4 pages) was written by the prolific Carl Wessler and drawn by Jack Keller. It was reprinted from Gunsmoke Western #46 [May 1958]. This tale has a WTF? ending that still has my head spinning. However, to tell you about it, I have to activate the usual spoiler warnings...

Lawman Frank Cody is chasing Brod Bodin, who has robbed the local Wells Fargo Express office. Cody and Bodin were once the closest of friends. As Bodin shoots at the lawman, Cody holds back from firing back. You see, in a further complication, Julie, the woman Cody is in love with, loves Bodin. The lawman figures Julie will hate him if he finishes off the outlaw.

Bodin takes cover in a cabin. Cody needs to find a way to capture him without killing him. Spotting the rocks and boulders on a hill above the cabin, Cody starts shooting at them.

Cody triggers a landslide that crushes through the cabin’s roof and pins Bodin beneath some beams. Bodin dares him to finish him off, but the lawman takes him to jail instead.

After Bodin is behind bars, Julie bursts into Cody’s office. Enter the absurd surprise ending...

Julie isn’t in love with Bodin. She turned down Cody’s proposal of marriage and pretended to love Bodin, hoping there was a chance of straightening Brod out. If her plan had worked, she would’ve eased out of marrying Bodin to marry the only man she ever really loved. Lawman Frank Cody.

You were just tryin’ to help a man who didn’t want to go straight! Oh, Julie. What I went through! But, honey, you’re worth it.

No, no, no, Frank! Stop thinking with your little pistol! Julie’s messing with you could have gotten you killed. I don’t know if you have 99 problems, but, trust me on this, this, ah, crazy woman is definitely one of them. 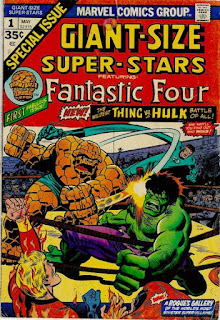 The last editorial content page in this issue was split into three sections. The first was a house ad for  Giant-Size Super-Stars #1  [May 1974]. The 52-page, 35-cent issue starred the Fantastic Four in a new 24-page story by Gerry Conway, Rich Buckler and inker Joe Sinnott. Filling out the issue were text pieces on the genesis of the new giant-size line and Roy Thomas’ thirteen-year-old fanzine review of Fantastic Four #1...and reprints of several of the ““Gallery of the Fantastic Four's Most Famous Foes!” pages mentioned above. 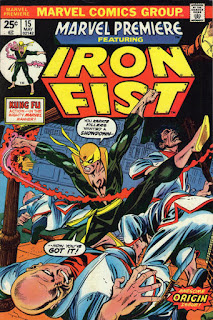 The second section of the page was a house ad for Marvel Premiere #15 [May 1974] featuring the origin of Iron Fist by Roy Thomas, Gil Kane and Dick Giordano.

The third section had the “Statement of Management, Ownership and Circulation,” also mentioned above. The Rawhide Kid was selling an average 138,720 copies per issue with 74 paid subscriptions.

That’s all for now. It’s time for ol’ Bloggy Tony to saddle up and ride into the sunset. But I’ll be back tomorrow with a look at yet another blast from the past.